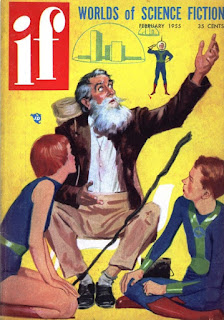 My friend Joachim Boaz has a review of this title on his site as part of a Terry Carr collection. It's a Cold War dystopian tale of the futile and self-perpetuating nature of that conflict. Clearly George H. Smith, largely forgotten today, was a clear-eyed observer of the idiocies of the 1950s. As the world was moving faster and faster, and the role of technology in it was increasing, Smith's was a reasonable near-future projection of soldiers contained in full-service "mecho-suits." The battleships on legs that they're isolated from the world they're destroying within...our narrator even touches briefly on the fact that he has no idea what any of his fellow soldiers look like, sealed inside their battle- and life-support pods, and has stopped caring...seemed practical, desirable. And true to Smith's sexual fixation, he even tosses (!) in the speculation that "Realie TV" will supply the men (of course) sealed up with, um, services like there were "girls" right there in the pods with them. Southern-born Smith wrote more extensive sexual SF, as well as a reverse-PoV version of Doctor Strangelove about a rogue Russian general who launches an atomic attack on the US.

The military, as personified by our ignorant grunt narrator and a pointed parody General called "Fightin' Joe Mac Williams" (who is clearly the performative battle-boy Douglas MacArthur, he of the famous "I shall return" speech and the chestful of medals) does not get the standard Cold-War adulation. Here that stupidity is beautifully lampooned by the narrator listening to a speech that he knows will cause a lot of death in this Paris, barely even sketched in, that we're told is the scene of the action: "A voice that used to sell us bath soap is selling us war."

The story appeared in 1955, shortly after the Korean War that MacArthur famously wanted to run very differently from then-President Truman, and got himself fired for insubordination as he went public with their differences. It was a case of being kicked upstairs, though, as MacArthur landed a role as leader of defense contractor and computer innovator Remington Rand, whose main business was in typewriter sales at that time. MacArthur, the War Hero as he would never, ever hesitate to remind you, taking such a deeply civilian job as selling typewriters and electric razors, was the source of the dig I quoted above. The dénouement takes place in the Louvre...and it's really nothing less than heart-breaking, if heavy-handed, in delivering its (more suited to the Sixties) message: What are we fighting for, again?

In all, I was very pleased to follow Dr. B down this weird little side-path of SF history, learn more about a writer I feel sure I'd never read a single word by before now, and renew my Cold War memories of people and events now dusty with the uninterest of the modern audience. 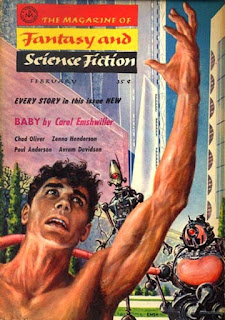 BABY
CAROL EMSHWILLER
The Magazine of Fantasy and Science Fiction
February 1958 edition, free to read on pages 114 to 128 linked above

My friend Joachim Boaz is reading through the short fiction of Carol Emshwiller...his review of this story is here.

Possibly the bleakest story I've ever read. This is the end of days, the end of Humanity...and it's all our fault. Our creations, those meant to care for us, have long outlived their responsibilities and, while executing irrelevant or now-harmful duties, are making the world impossible for us to live in.

Emshwiller and her compatriots warned us. And, while it doesn't look precisely like she predicted, the events of the present year are seriously in line with the predictions she made sixty-three years ago. I'm never quite sure the world's failing is real; then I read this, the systems slowly collapsing, the zombies of Reassurance and Normality trying to wish away the plague and the increasingly obvious shortages. I'm not crazy after all. (Well, yes I am, but not in the "lost-to-reality" way...more's the pity.)

Baby's young-adult body, not equipped with an education or a language to handle the new world he lives in, is naked and vulnerable to the world, acted on without his consent and/or despite his resistance as the zombie systems try the same solutions for the new problems. They fail utterly to help. The man is starving. The man is going to die.

It's 1958, so he Finds a Woman (called Honey) and Has a Purpose. Let's just put that down to the poison of the era, nothing can exist outside the Binary Amen World Without End, and draw a line under it.

The larger story of Baby is the resources of the planet will only last so long. When we run out of what we think we need, what will we be able to do about it when we have no knowledge to create anything new? And from what resources we have, are we going to allocate them and use them equitably? After all, Baby set out on his voyage of discovery because he was starving and Honey still has food. The Central that Baby invokes (I'd say "prays to" if he'd ever had a concept of Divinity) doesn't run properly anymore or he'd have supplies. The chocolate pie he eats in House 76 at the beginning of the story stands in for Emshwiller's ever-so-American suspicion of a central planner with the authority to do things for you. "And when it fails?" she asks without subtlety.

It's not at all a bad question to ask...Baby and Honey are as infantilized as I fear most people are becoming as the educational fads of today fail to prepare them even to read fluidly. (Read my review of this book.) Of course the automated Library has failed Baby and his Guardians, too...as I'm hugely dependent on my ereader, I recognize with no small trepidation how vulnerable that leaves me to technological disruptions that are, quite frankly, inevitable. I hope to be dead before they bite too hard....

But Emshwiller's main achievement in these dozen pages is really more impressive than simply Cassandra-ing up a future we should all dread. What she did was, as a woman, tell a story in a misogynistic field to readers not predisposed to like the way she presents it...Cold War SF fans...and without making it Sentimental. (Still ignoring Honey.) She did, ironically, marry and have kids shortly after this piece appeared and was silenced for almost an entire decade by the life of a Wife and Mother. She also came back from that silence, see her bibliography. This voice spoke wisdom, and did not stop speaking it. Seek her work out.
Posted by Richard at 6:30 AM