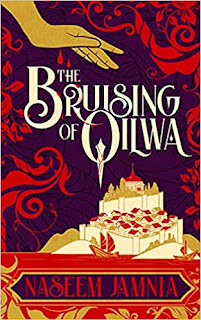 The Publisher Says: In this intricate debut fantasy introducing a queernormative Persian-inspired world, a nonbinary refugee practitioner of blood magic discovers a strange disease that causes political rifts in their new homeland. Persian-American author Naseem Jamnia has crafted a gripping narrative with a moving, nuanced exploration of immigration, gender, healing, and family.

Firuz-e Jafari is fortunate enough to have immigrated to the Free Democratic City-State of Qilwa, fleeing the slaughter of other traditional Sassanian blood magic practitioners in their homeland. Despite the status of refugees in their new home, Firuz has a good job at a free healing clinic in Qilwa, working with Kofi, a kindly new employer, and mentoring Afsoneh, a troubled orphan refugee with powerful magic.

But Firuz and Kofi have discovered a terrible new disease which leaves mysterious bruises on its victims. The illness is spreading quickly through Qilwa, and there are dangerous accusations of ineptly performed blood magic. In order to survive, Firuz must break a deadly cycle of prejudice, untangle sociopolitical constraints, and find a fresh start for their both their blood and found family.

Powerful and fascinating, The Bruising of Qilwa is the newest arrival in the era of fantasy classics such as the Broken Earth Trilogy, The Four Profound Weaves, and Who Fears Death.

My Review: I am all the way here for a Persian storyverse-inspired QUILTBAG-inclusive secondary world with a not-silly science-cum-majgickq system based on blood. This idea has me all excited, with the nigh-on irresistible urge to send the author CARE packages of food and crowdsourcing their laundry so they will not have to leave their writing desk unless answering the call of nature.

What keeps me from offering the story all five stars is the first-publication longueurs that are so very common as to feel universal. The storyverse is astonishingly successful in compelling my attention, given how brief the story here told is. There is a depth to Firuz's native Sassanians, a minority group not beloved in their world, and named by the author after the last pre-Muslim Persian empire in our world...echoes of the religious monopoly being enforced in many parts of the world, the intolerance that entails and encourages. The blood-magic system, with its science-tinged presentation, was presented as a source of fear and persecution; yet, during the plague that strikes Qilwa, it is urgently needed to help fix the problems this plague presents. The tables are turned and those so recently deemed outcast are needed to fix what the many are suffering. Always a great direction to aim a story!

So you can see that the story possesses many layers just from the little I've said; there are other normative things (eg, introducing one's self with pronoun and name, like I'd be "him–Richard" then just Richard after that...a lot like royalty gets to explain how they're addressed to us mere commoners on those rare occasions we're presented to them) that can unpack over the course of a long series of stories set in this place while instantly adding a lush richness to the present reading experience. What doesn't work so well is Firuz's social anxiety/awkwardness being borne down on narratively at every turn. I get it...they're very awkward, it's not necessary to repeat this every other page. There are points where their trans brother could've taken the stage more completely and thus enriched the read's texture; seeing him only from the outside is fine, like all inclusion, but his transition is so very much a driver of the story that allowing him to take center stage could've given me so much more. Satisfying my curiosity about how he sees this world would've given the plague, the clinic where Firuz practices healing, and what it is that Firuz and Kofi share that makes the clinic so real-feeling, needed dimensionality.

The surprisingly secondary character Afsoneh is a wild child, we're told; we're never really shown this facet of her character. Firoz mentors her and so should've had more of a struggle with her acting out if she's such a chaotic person. Instead it's brushed past. I know it's a function of the novella format. I'm even willing to go along with the clipping of storylines that this format requires uncomplainingly...IF I can trust that the characters are going to get more stage time later. Not too much later.

I bestow on this deeply involving read my most difficult-to-earn accolade: More, please.