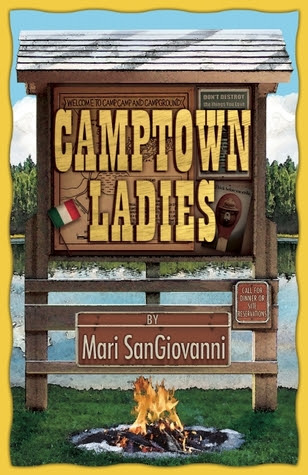 The Publisher Says: Just when you thought it was safe to pitch your tent, the Santora family shows up. Lisa's taken over a rundown campground, baby sister Marie's been dumped (again!) by the actress, and the Santoras don't know the meaning of minding their own business. When the whole clan decides to fix things for their girls, it's a hilarious recipe for havoc. Camptown Ladies is the sequel to Greetings From Jamaica, Wish You Were Queer.

Mari SanGiovani lives the crazy Italian family lifestyle and writes about it like no one else.

My Review: Okay, see, it started like this. A few years ago, I was having a discussion with an old, old, old dyke of my acquaintance (I mean, born in the first Truman administration! And not dead yet!) about how gay men don't support lesbian writers and publishers of lesbian-themed books, and fewer straight men do this than straight women support gay smexy-time publishers. (I suspect ZERO straight men read gay smexy-time books, they're too skittish about the whole thing, poor lambs.) (BTW, when exactly did you dirty, dirty ladies start using men together as bubble-machine starter? I am shocked, shocked!)

Back to my story. So after a somewhat spirited exchange, containing the words "do not!" and "you big stupid!" rather more often than is seemly for two people whose combined age reaches well, well into triple digits, a challenge was issued: Each of us would buy from InsightOut (GLBTQ book club) a novel wholly and entirely about the other's preferred romantic partnerings. I bought Greetings from Jamaica, Wish You Were Queer.

Oh blessèd day. I snorted, howled, giggled, and generally made unseemly noises the entire time I was reading...make that devouring...the book. My then-love interest, the lamented Mr. Man, got so curious he read it too. He laughed, or the relationship would've ended sooner.

I sent the book to another friend, and she howled her way through it. She sherpa'd the sequel, recommending it to me, and keeping me abreast (!) of developments in Mari SanGiovanni's personal life. The fact that I'm finally reviewing the book is due to the fact that I need to get it in the mail to yet another friend who read the first one after several of us pummeled him into reading the first one (he's a straight boy, poor thing, so it took a wee tiny bit of coaxing). Having done so, he's fallen for Marie, Lisa, and Lorn just like the rest of us, and is looking forward to reading more about them.

Little does he know. (Close your eyes, Mark! Spoilers from here on out!)

Mari has made Marie's life easier in this book: She's broken up with Lorn, whose career as a movie star means more to her than her love for Marie, she's got money, and her lunatic out-there Italian family (a lot like several Italian families I know, all up in each other's business and as full of questions and demands as any police interrogator) go to work together. Marie gets to leave Lorn's orbit and lick her wounds, Lisa the older sister who's also a dyke gets to hit on the girls around and about, and so does Vince the youngest child, a straight boy (such a pity, that).

Vince does bring Erica, his girlfriend, into the picture.

Oh well, so much for family harmony. Erica falls in love with Marie, Marie goes back to Lorn, Erica leaves for Italy, and there's a romantic ending that made me mist over. Not before, however, I'd snorted and guffawed a lot. There's the clamdigging scene, with Lisa at her inappropriate best/worst. Think I hurt myself laughing, retching, laughing, and shuddering.

So anyway, off this book goes to its new daddy. I hope he hides it from his wife, there is a goodly amount of lesbian sex of the detailed sort in it. I skimmed. Fast. Now if I can just read this address...I find it improbable that he lives in "Olympus Mons, JI" since we haven't colonized Mars yet. I must've written the address down while still laughing about the clamdigging scene.