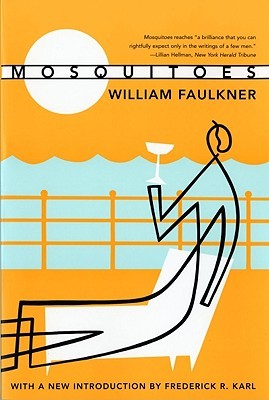 The Publisher Says: Mosquitoes centers around a colorful assortment of passengers, out on a boating excursion from New Orleans. The rich and the aspiring, social butterflies and dissolute dilettantes are all easy game for Faulkner's barbed wit in this engaging high-spirited novel which offers a fascinating glimpse of Faulkner as a young artist.

"It approaches in the first half and reaches in the second half a brilliance that you can rightfully expect only in the writings of a few men. It is full of the fine kind of swift and lusty writing that comes from a healthy, fresh pen."--Lillian Hellman, New York Herald Tribune

My Review: Well, that's over. And thank goodness for that. I loves me some Faulkner, but this is a mediocre book.

It's an hour-by-hour, day-by-day account of a Lake Pontchartrain boat ride, peopled by the louche and the bohemian second-ranking artistes (spoken in a veddy, veddy affected tone) who infest the ever-pretentious city of New Orleans. (I mean, really, the place is a swamp, it's rotting around its own ears, it's poor as dirt, and it's so effin' hot that even mosquitoes have the sense to move out to the lakeshore for the summer. THIS is a place to build a city?)

It's a roman à clef, taking its "inspiration" from an actual boat ride Faulkner went on in New Orleans before moving to Paris. Where, not coincidentally, Faulkner met Sylvia Beach, who published Ulysses, the famously banned-in-Murrika sexytime (for its day in the early 1920s) novel that "inspired" the hour-by-hour day-by-day format of this book.

Also not coincidentally, Joyce's masterwork (which I don't much like) "inspired" Uncle Bill to put in a lot of sex-talk, including *gasp* explicitly lesbian desires!! Maud Martha, bring the sal volatile and loosen my stays, the wimminfolk are runnin' amok!

Now that might seem a tad mean-spirited for a man writing 87 years later, to go after such a very surprising and open sexual transgression of the day, but trust me when I tell you: The roman à clef aspects of the book completely render the daringness of the author's choices into tawdry score-settling and Bret-Easton-Ellisy tittle-tattle.

Want to know why I say that? I'm tellin' ya anyway: Every character on the damn boat (the Nausicaa, "Burner of Ships," get it huh get it get it? Faulkner's bein' all erudite an' stuff!) is a loser, and Faulkner writes himself in as the only "successful" artist around:


"Anyway, I didn't go in swimming where the man got drowned. I was waiting for them, and I got talking to a funny man. A little kind of black man--"
"A nigger?"
"No, he was a white man, except he was awful sunburned and kind of shabby dressed--no necktie and hat. Say, he said some funny things to me. He said I had the best digestion he ever saw, and he said if the straps of my dress was to break I'd devastate the country. He said he was a liar by profession, and he made good money at it, enough to own a Ford as soon as he got it paid out. I think he was crazy. Not dangerous, just crazy."

The speaker goes on to remember his name was something like Walker or Foster, but whatever it was it started with an "F" like her friend's middle name, Frances.

Well, it was only his second novel. And he'd just come home from Paris when he (most probably) wrote it, so he was still digesting the *huge* bolus of Kulcher he'd swallowed and wallowed in. He was young and this is a very young-man-overachiever kind of a novel. It's not the worst book I've ever read, and not even the least impressive Faulkner I've read (no fan of Wild Palms, me).

But it's just too good to dismiss and just too clever-clever to enjoy and just too coltish to admire in the context of the Faulkner ouevre. Neither fish nor fowl, as Mama said of suchlike creations.

A few other good quotes:

“Talk, talk, talk: the utter and heartbreaking stupidity of words.”