THE UNLIKELY PILGRIMAGE OF HAROLD FRY...surprisingly not soon to be a major motion picture 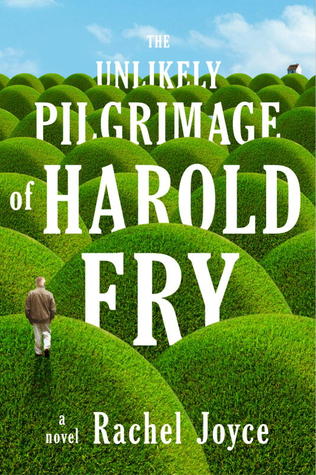 The Publisher Says: Meet Harold Fry, recently retired. He lives in a small English village with his wife, Maureen, who seems irritated by almost everything he does, even down to how he butters his toast. Little differentiates one day from the next. Then one morning the mail arrives, and within the stack of quotidian minutiae is a letter addressed to Harold in a shaky scrawl from a woman he hasn’t seen or heard from in twenty years. Queenie Hennessy is in hospice and is writing to say goodbye.

Harold pens a quick reply and, leaving Maureen to her chores, heads to the corner mailbox. But then, as happens in the very best works of fiction, Harold has a chance encounter, one that convinces him that he absolutely must deliver his message to Queenie in person. And thus begins the unlikely pilgrimage at the heart of Rachel Joyce’s remarkable debut. Harold Fry is determined to walk six hundred miles from Kingsbridge to the hospice in Berwick-upon-Tweed because, he believes, as long as he walks, Queenie Hennessey will live.

Still in his yachting shoes and light coat, Harold embarks on his urgent quest across the countryside. Along the way he meets one fascinating character after another, each of whom unlocks his long-dormant spirit and sense of promise. Memories of his first dance with Maureen, his wedding day, his joy in fatherhood, come rushing back to him—allowing him to also reconcile the losses and the regrets. As for Maureen, she finds herself missing Harold for the first time in years.

And then there is the unfinished business with Queenie Hennessy.

A novel of unsentimental charm, humor, and profound insight into the thoughts and feelings we all bury deep within our hearts, The Unlikely Pilgrimage of Harold Fry introduces Rachel Joyce as a wise—and utterly irresistible—storyteller.

My Review: I take strong exception to the publisher's sales copy calling this book “unsentimental” because it most assuredly is as sentimental as it's possible for a story to be. It is Dickensian in its sentimentality. Anyone who has ever interacted with me will know I do not intend that as a compliment.

The Mouldering Mound of ~Meh~ is the natural home of this Grail quest. Sentimental encounters with many characters, all of whom unlock Harold's frozen memories (frozen, may I add, for excellent reasons that spoiler aversion forbids me to so much as hint at) and, in turn, leave Harold to his long walk being changed in their turn. So nothing new there.

The mildly humorous, mildly silly tone of the narrative is mildly pleasant, and Joyce makes every effort to be an engaging companion on Harold's walk with the reader. I got quite fed up with the book around p50, and soldiered on for one reason and one only: The MAN Booker people put it on the Prize list. It didn't win, obviously, but this got nominated? Why? Is there something on p310, p186, any whole number you can name up to 316, that will make this make sense to me?

No. No, there is not. It's all nice, pleasant, amusing, beige-carpet-and-cream-walls stuff. Don't even dream that there's an Ugly Secret lurking here. There's no monster in this lake, unless you subscribe to the theory that evil in its purest form is banal.

For all its banality, Joyce tells us about the anguish that lives in most hearts, and even roadmaps the way for the disconnected to reconnect. She's got the chops to make that happen without overt, eyerollingly hammy Declarations and Heart-to-Hearts, thank goodness. I said it was pleasant! But, well, it's just so....

Untoasted Wonder Bread with Velveeta, tuna salad, and cream gravy sound good to you? Here's you a book.

This work is licensed under a Creative Commons Attribution-NonCommercial 3.0 Unported License.

So...why rate this novel with three stars? A question I've been asked a lot. I found several quotes that I found trenchant, amusing, and even a bit profound. That's the source of a good one and a half of the stars I've rated the book:

“I miss her all the time. I know in my head that she has gone. the only difference is that I am getting used to the pain. It's like discovering a great hole in the ground. To begin with, you forget it's there and keep falling in. After a while, it's still there, but you learn to walk round it.”

“The world was made up of people putting one foot in front of the other; and a life might appear ordinary simply because the person living it had been doing so for a long time.”

“You got up, and you did something. And if trying to find a way when you don't even know you can get there isn't a small miracle; then I don't know what is.”

“Beginnings could happen more than once, or in different ways.”

“It was not a life, if lived without love.”

“If I just keep putting one foot in front of the other, it stands to reason that I'm going to get there. I've begun to think we sit far more than we're supposed to." He smiled. "Why else would we have feet?”
Posted by Richard at 11:02 AM