OCTOPUS!, an interesting read about a fascinating creature 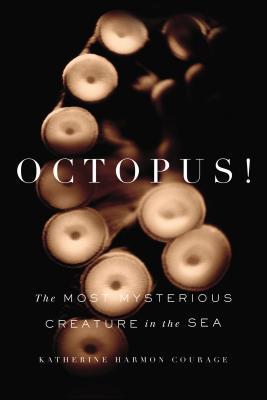 I received an ARC from Current Books for review, but I don't remember why.

The Publisher Says: We eat, study, copy, and idealize the octopus. Yet this strange creature still eludes our understanding. With eight arms, three hearts, camouflaging skin, and a disarmingly intelligent look behind its eyes, it appears utterly alien. But octopuses have been captivating humans for as long as we’ve been catching them. Cultures have created octopus-centric creation myths, art, and, of course, cuisine. For all of our ancient fascination and modern research, however, we still haven’t been able to get a firm grasp on these slippery beasts.

Now journalist Katherine Harmon Courage dives into the fascinating underwater world of these mysterious cephalopods. From her transatlantic adventures to Spain and Greece, expeditions in the Caribbean and back to Brooklyn, she invites readers to experience the scientific discoveries, deep cultural ties, and delicious meals connected to the octopus.

Courage deftly interweaves personal narrative with interviews with leading octopus experts. She provides an entertaining yet informative romp through the world of these infinitely interesting creatures.

My Review: Anyone who's paid me the slightest bit of attention over the years knows I'm a fan of Tentacled Americans. They're delicious. They're delightfully ookie. They're probably the closest things I'll ever have to soul mates: They don't like their own kind, regard other species as prey or enemies, and possess a deeply misunderstood intelligence.

All I lack is six more arms.

And now Katherine Harmon, a writer for Scientific American who appears to have married into the coolest last name ever, writes a Mary Roach-esque monograph on the 'pus! Oh frabjous day callooh callay! I dived (!) into the book the instant the mailman shoved it into the door-slot.

What a dive that was. I landed in the sea-water off Vigo, Galicia, with the seasick Harmon Courage (love that new name!), thinking about the *a*maz*ing* octopus preparations prevalent in the region. The trip to Greece's Octotropolis Gythio was a drool-inducing litany of same-ol' same-ol' octopus preparation: wail on the dead body on the ever-present beach rocks, hurry home and boil it then saute the tentacles in olive oil and then make a tasty accompanying sauce. You can not go wrong doing this. It is never-fail deliciousness, with the added bonus of being nutritious and heart-healthy.

I'm drooling. Pardon me, need to clean the keyboard.

So for sixty pages, I existed in a haze of hunger and longing for some fresh octopus instead of the canned smoked stuff from Vigo. Page sixty-one began the lessons, or as a pal of mine says, "the eat-your-spinach part."

Fortunately, I enjoy "eating my spinach" and learning about stuff. The only television I'm really interested in is informational/educational stuff...if I'm going to do something I don't enjoy (sit still in front of a screen and stare fixedly), I'm at least going to get something memorable out of it....so I trotted happily along in Harmon Courage's wake as she chatted up the scientists who study these fascinating creatures. The locations she gets herself sent to are anathema to me, being largely warm-water beachy places, locales I'd pay good money never to have to visit. But the scientists are opening an immense realm of knowledge by living and working there, and no one's making me do it, so here I sit in air-conditioned splendor reading about the fascinating conclusions from this research.

Modern life, for a first-worlder, is excellent.

Octopus skin is near-miraculous in its mimetic ability. Octopus brains are only barely beginning to be studied but are already causes for fascinating discoveries. Octopus bodies are marvels of efficiency, and inspiring research into imitative robotic design.

Wondrous stuff, and that's not even half of the scientific amazement. How does a delicious creature without a shell avoid being din-din for every hungry thing in the sea? We've all heard about the ink-squirting defense, we've all heard of the prodigies of camouflage, but who knew that the wriggly ones could emit a *sound* that distracts vibration-sensitive predators? How? From WHERE?! Still being studied, stay tuned....

All of the above is my yodel of praise and my warble of enticement for you to dash out and buy a copy of this informative, enjoyable book. But the attentive reader will note that my rating is under four stars, while my enthusiasm is (I hope) evident. My rating might then seem ungenerous.

I feel bad about it, but I have to be a little ungenerous. The first sixty pages, with recipes and culinary enticements, do not fit comfortably with the science and research bits in the second part. The transition is handled as smoothly as it can be, but still isn't comfortable, because the nature of the book changes completely at that point. Harmon Courage's amusing, light touch doesn't change. She has a bit less to work with in humor terms. Not to say that, all of a sudden, we're in a textbook. It's simply a change from chatty, dinner-table food discussion, to after-dinner talk with slides and charts. Both are pleasurable, but in very different ways.

I want to be clear: This book gave me a lot of pleasure to read. I immersed myself in the lore and the science and the witty banter like they were a warm, salty bath, easing my literary aches and pains from reading so much forgettable snack-food in search of a good reader's meal. I got what I wanted from this read, and I suspect that any fan of light, amusing, informative reads will as well.

But like an octopus, I'm sensitive to the subtle shifts in my natural medium. Octopus blood is copper-based, which is why the darlings bleed blue. It's a less robust base for oxygen transmission than mammailan iron, and renders the octopus very vulnerable to changes in the ocean's acidity...too far outside its comfort zone, and the octopus dies. The climate change issues we've wished on the world include acidifying oceans.

The problem isn't a disaster, like the mismatch within the book isn't a disaster. But it's there, and it's something that needs mentioning, so that it might be cured for the future.
Posted by Richard at 6:30 AM