PREPARING THE GHOST, sadly not a traveler's guide to the Bardo 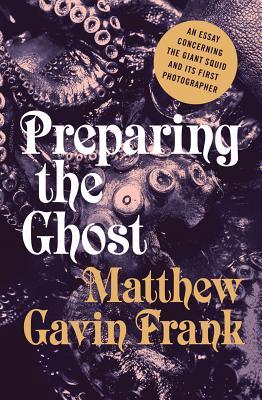 The Publisher Says: Moses Harvey was the eccentric Newfoundland reverend and amateur naturalist who first photographed the near-mythic giant squid in 1874, draping it over a shower curtain rod to display its magnitude. In Preparing the Ghost, what begins as Moses's story becomes much more, as fellow squid-enthusiast Matthew Gavin Frank boldly winds his narrative tentacles around history, creative nonfiction, science, memoir, and meditations about the interrelated nature of them all. In a full-hearted, lyrical style reminiscent of Geoff Dyer, Frank weaves in playful forays about his research trip to Moses's Newfoundland home, Frank's own childhood and family history, and a catalog of bizarre facts and lists that recall Melville's story of obsession with another deep-sea dwelling leviathan. Though Frank is armed with impressive research, what he can't know about Harvey he fictionalizes, quite explicitly, as a way of both illuminating the scene and exploring his central theme: the big, beautiful human impulse to obsess.

My Review: This writer is clearly obsessive, all right. Obsessive to the point of causing me to put this book down for long stretches at a time: From 2014 to 2016, I've averaged 90 pages a year, and was hard put to make my annual quota in each of those years:

This example takes place in this year's reading, but I promise you it's not unique in any portion of the book. If I cared more, I'd paste some illustrations of the birds linked by the couldabeens, but I trust that you're smart and educated enough to see the unlikelihood of any of these being literal possibilities...raven? jay? the fuck?...and therefore aware of their metaphorical significance.

If so, please leave a comment explaining it to me. I don't get it. I also don't care anymore, but it would be mildly interesting to hear someone try to make value out of this shiny brummagem pointlessness.

This appears to be Frank's sixth published book. That is impressive indeed. These days it's astounding when an author gets six chances at the brass ring. Frank's talents are praised by luminaries like Simon Winchester, Matt Bell, Lidia Yuknavitch...people whose work I've read and enjoyed...and I cannot fathom (see what I did there? Huh? Get it, "fathom" in the understand sense playing on "fathom" the nautical measurement of depth referring to the Giant Squid's benthic (!) abode? Am I a clever boots or am I a clever boots?) why.


"From that corpse-like embrace there is no escape."
Harvey's prose here makes it unclear as to whether the giant squid grabbed the men and flung them across the boat, or if the men themselves, out of some primitive fear launched their own bodies across the boat to escape the squid's "embrace," or if the men were telling "stories in order to live," or if I am.

The reference is to “We tell ourselves stories in order to live,” written by the mainstream's counterculture biggie Joan Didion in her collection of essays attempting to make some kind of sense of that confused, violent, revolutionary instant between 1966 and 1970, The White Album, itself titled after the contemporaneous major cultural event that was the release of the Beatles' final group album of the same name. I agree with Didion's assertion. I am utterly out of sympathy with Frank's use of it.

Anyway, the hardcover's very pretty with a handsomely designed text set in an agreeably readable yet still old-fashioned type that has some extra-spiffy question marks. And a damned good thing, that, because this text is liberally peppered with questions from the author to Clio, muse of history, to his sources, to dead ancestors, even to the reader.

None of them helped me answer my own questions: Why? Why do I possess this book, did someone give it to me (and if so I don't want you to 'fess up because We Will Have Words), why in heaven's name did I spend parts of three years finishing it?