NINETY PERCENT OF EVERYTHING, Rose George's tales from the world of shipping 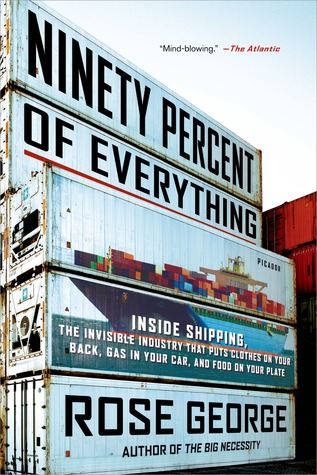 NINETY PERCENT OF EVERYTHING: Inside Shipping, the Invisible Industry That Puts Clothes on Your Back, Gas in Your Car, and Food on Your Plate
ROSE GEORGE
Picador
$17 trade paper, available now

The Publisher Says: On ship-tracking Web sites, the waters are black with dots. Each dot is a ship; each ship is laden with boxes; each box is laden with goods. In postindustrial economies, we no longer produce but buy, and so we must ship. Without shipping there would be no clothes, food, paper, or fuel. Without all those dots, the world would not work. Yet freight shipping is all but invisible. Away from public scrutiny, it revels in suspect practices, dubious operators, and a shady system of "flags of convenience." And then there are the pirates.

Rose George, acclaimed chronicler of what we would rather ignore, sails from Rotterdam to Suez to Singapore on ships the length of football fields and the height of Niagara Falls; she patrols the Indian Ocean with an anti-piracy task force; she joins seafaring chaplains, and investigates the harm that ships inflict on endangered whales. Sharply informative and entertaining, Ninety Percent of Everything reveals the workings and perils of an unseen world that holds the key to our economy, our environment, and our very civilization.

My Review: Rose George is Mary Roach said with an English accent. I love lines like this:

Who can resist reading stuff by someone with this gamine grin in her prose?

Trade has always traveled and the world has always traded. Ours, though, is the era of extreme interdependence. Hardly any nation is now self-sufficient. In 2011, the United Kingdom shipped in half of its gas. The United States relies on ships to bring in two-thirds of its oil supplies. Every day, thirty-eight million tons of crude oil sets off by sea somewhere, although you may not notice it. As in Los Angeles, New York, and other port cities, London has moved its working docks out of the city, away from residents. Ships are bigger now and need deeper harbors, so they call at Newark or Tilbury or Felixstowe, not Liverpool or South Street.

In 2009, Lloyd's List reported that Maersk had sent a memo headed "Zero Recruitment in Europe." The columnist was scathing. "Famously, there are already more blue whales than there are British seafarers on British ships. The difference is that people are taking conservation measures to save the whale."

All workforces have waves and changing of guards. There were lascars and now there are Filipinos. But the diminishment of British and American merchant navies is unprecedented. There is regular fretting about recruitment in the pages of the shipping press. Some British seafarers plan to retire early or move into shore jobs. The captain [of her ship]...can be cold about his job—it is moving giant boxes, and that is that—but the force of his anger about his changed industry conveys something other than coldness. Before the oil crisis in 1973, there were British crews, British labor laws. After that they took the companies offshore. They offered us contracts with thirty percent lower wages, take it or leave it."

Same as it ever was in labor-versus-capital relations, isn't it.