SO LONG, SEE YOU TOMORROW: one of the most poignant novella titles I've ever read 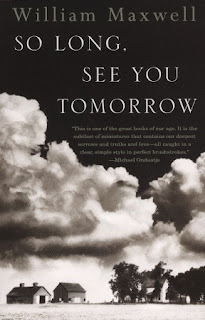 The Publisher Says: In this magically evocative novel, William Maxwell explores the enigmatic gravity of the past, which compels us to keep explaining it even as it makes liars out of us every time we try. On a winter morning in the 1920s, a shot rings out on a farm in rural Illinois. A man named Lloyd Wilson has been killed. And the tenuous friendship between two lonely teenagers—one privileged yet neglected, the other a troubled farm boy—has been shattered.

Fifty years later, one of those boys—now a grown man—tries to reconstruct the events that led up to the murder. In doing so, he is inevitably drawn back to his lost friend Cletus, who had the misfortune of being the son of Wilson's killer and who in the months before witnessed things that Maxwell's narrator can only guess at. Out of memory and imagination, the surmises of children and the destructive passions of their parents, Maxwell creates a luminous American classic of youth and loss.

My Review: What a beautiful but sad book.


What we, or at any rate what I, refer to confidently as memory--meaning a moment, a scene, a fact that has been subjected to a fixative and thereby rescued from oblivion--is really a form of storytelling that goes on continually in the mind and often changes with the telling. Too many conflicting emotional interests are involved for life ever to be wholly acceptable, and possibly it is the work of the storyteller to rearrange things so that they conform to this end. In any case, in talking about the past we lie with every breath we draw.

So speaks out narrator as he sets out to recreate the end of his childhood. The last gasping breath of an unhappy lad's, I think innocence is too light-hearted a term for it, ignorance of the full measure of unhappiness that others can bear in addition to himself, even if he waits a half-century to get to the meat of the pain:


Whether they are part of a home or home is a part of them is not a question children are prepared to answer. Having taken away the dog, take away the kitchen–the smell of something good in the oven for dinner. Also the smell of washing day, of wool drying in the wooden rack. Of ashes. Of soup simmering on the stove. Take away the patient old horse waiting by the pasture fence. Take away the chores that kept him busy from the time he got home from school until they sat down to supper. Take away the early-morning mist, the sound of crows quarreling in the treetops.

His work clothes are still hanging on a nail beside the door of his room, but nobody puts them on or takes them off. Nobody sleeps in his bed. Or reads the broken-back copy of Tom Swift and His Flying Machine. Take that away too, while you are at it.

Take away the pitcher and bowl, both of them dry and dusty. Take away the cow barn where the cats, sitting all in a row, wait with their mouths wide open for somebody to squirt milk down their throats. Take away the horse barn too–the smell of hay and dust and horse piss and old sweat-stained leather, and the rain beating down on the plowed field beyond the door. Take all this away and what have you done to him? In the face of a deprivation so great, what is the use of asking him to go on being the boy he was. He might as well start life over again as some other boy instead.

"Cletus" brought to life as an Einsteinian thought experiment, a boy whose remembered existence is defined by a murder committed or a suicide perpetrated or both. Or neither?

But let me say this. My confusion about this issue is paralleled by the narrator's confusion about his own place, his very existence in the world of this little prairie farming town. His father isn't much for feelings, and he's a "sissy" and an artistic child...except for music, the art form his father loves and he knowingly resists learning as his only somewhat outward act of rebellion.


As he turned away I had the feeling he had washed his hands of me. Was I not the kind of little boy he wanted to have?

What strikes me as hilarious, in a not-funny-at-all way, is:


We were both creatures of the period. I doubt if the heavy-businessman-father-and-the-oversensitive-artistic-son syndrome exists anymore. Fathers have grown sensitive and kiss their grown sones when they feel like it, and who knows what oversensitive is, considering all there is to be sensitive to.

Well now, this novella having a publication date of 1980, all I can think is that Maxwell intended this as sly humor. Or else he was deaf and blind.

Sly humor it is.

And it's of a piece with the Maxwellian phrases that abound in this book. It's always so tempting to rush to the Goodreads quotes page and add...almost every line he writes. Retyping the entire book being, then, a real temptation, I add no quotes to the ones already found there. I rely on the mathematical certainty that all of us together are smarter than any one of us individually. Let the hive mind decide which of these sentences are crucial, which best illuminate Maxwell's writerly chops as well as his storyteller's acumen.

But the title of this review gives me away. I want to add something to the quotes page. I can't, though, because even I the "oh-so-what-about-spoilers" King-Emperor feel the last two pages of the story can't be excerpted without making the point of reading the book evaporate.

It is damned near heartbreaking, what those pages say and what it means. I was perfectly glad to read this book, and rate it close to four stars. Then the ending hit me with Negan's baseball bat.

Maxwell wrote a good little story and a perfect ending. That deserves recognition. Read it, please, it won't take long and it will give you something beautiful in return.
Posted by Richard at 6:30 AM