THE QUEST, fourth Ancient Egyptian novel, goes over the top 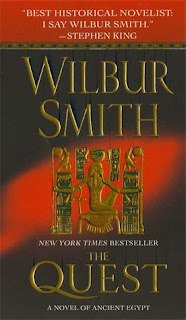 The Publisher Says: Wilbur Smith has earned international acclaim for his bestselling River God, The Seventh Scroll, and Warlock. Now, the unrivaled master of adventure returns with the eagerly awaited sequel to his thrilling Egyptian series with his most fantastic story yet. The Quest continues the story of the Warlock, Taita, wise in the lore of the gods and a master of magic and the supernatural.

Egypt has been struck by a series of terrible plagues, killing its crops and crippling its people. Then the ultimate disaster befalls the kingdom. The Nile fails. The waters that nourish and sustain the land dry up.
Something catastrophic is taking place in the distant and totally unexplored depths of Africa, from where the mighty river springs. In desperation the Pharaoh sends Taita, the only man who might be able to find his way through the hazardous territory to the source of the Nile and discover the cause of all their woes. But not even Taita can have any idea of what a terrible enemy waits in ambush in those dark lands at the end of their world.

No other author can conjure up the violence and mystery of Ancient Egypt like Wilbur Smith. The Quest marks his stirring return to the acclaimed series and proves once again why fans such as Stephen King praise him as the world's "best historical novelist."

My Review: Okay. I started the series with an historical novel, shifted into overdrive as a fantasy element came to the fore in Warlock, and now we're in full-blown fantasy mode. The story isn't remotely believable as history, but it's s a good deal of fun.

What's disturbing to me is the squicky sexual politics. A eunuch is de-eunuched supernaturally to make the beast with two backs with a (young) reincarnated version of his long-dead love. I'm not sure that makes me all warm and fuzzy about love spanning the ages or really, really uncomfortable with old men sexing up little girls. Well, okay, she's not an actual little girl. But something just doesn't sit right with me. I don't know exactly what it is, in that the author isn't in any way making this prurient and sexual but is presenting it as lovers separated by death being reunited. I am not, however, comfortable with it, and it significantly clouded my enjoyment of the exciting, adventurous, and action-packed Wilbur Smith novel surrounding it.

The goddess battle was, I'm sorry to say, not a worthy end to the build-up we got. It was almost an afterthought, and it should have been a centerpiece. On balance, the Smith novel aspects are redeeming only to a middling extent. The pages turned, they will for all Smith readers, but the essential backing of history's known Egypt wasn't quite enough on this outing.
Posted by Richard at 11:59 PM