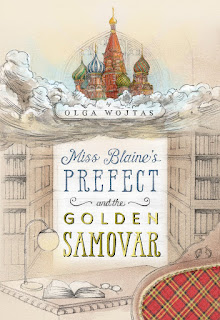 The Publisher Says: Never underestimate a librarian. Comfortably padded and in her middle years, Shona McMonagle may look bookish and harmless, but her education at the Marcia Blaine School for Girls has left her with a deadly expertise in everything from martial arts to quantum physics. It has also left her with a bone-deep loathing for The Prime of Miss Jean Brodie, that scurrilous novel that spread scandalous untruths about the finest educational institution in Edinburgh. Her skills, her deceptively mild appearance, and her passionate loyalty make Shona the perfect recruit for a new and interesting project: Time-travel to Tzarist Russia, prevent a gross miscarriage of romance, and - in any spare time - see to it that only the right people get murdered. It's a big job, but no task is too daunting for a Head Girl from Miss Blaine's.

THIS BOOK WAS BROUGHT TO ME VIA MY LOCAL LIBRARY'S I.L.L. PROGRAM. THANK YOU!

My Review: Shona McMonagle, whose life as a librarian is spent attempting to expunge The Prime of Miss Jean Brodie from the world's...okay, from Scotland's...make that Edinburgh's shelves for its heinous, unforgivable insults to her Revered Preceptress Marcia Blaine of the (fictional, get it?) Marcia Blaine School for Girls. You will not be surprised to know that Miss Blaine, though now more than 274 years old, accepts this tribute to herself and her educational precepts, her centuries-old vow to make all her girls the crème de la crème in all their fields of endeavor, by inviting (in a more commanding than inviting way) Miss McMonagle to undertake a delicate mission for her. That mission will involve time travel to Tsarist St. Petersburg at some point between the Decembrist Revolution of 1825 and the emancipation of the serfs in 1861. (Running joke that gets forgotten a lot. You'll see.)

What can one say to a 274-year-old that hasn't been said many times? Shona accepts the brief and, hey prestwick...I mean presto!...after some thoroughly unpleasant bodily pains she awakes in a peculiarly unsurprised and complaisant version of the capital of paranoid, isolationist, status-obsessed Imperial Russia, where she is Princess Shona Fergusovna. Or so she decides, being rather forced to take a title as her own despite her egalitarian and feminist principles. She does not, however, go so far as to pooh-pooh her Russian home from home's accoutrements:


I wandered back into the brightness of the salon and saw at the far end of the room my second samovar of the evening, vaster than the first, big enough to hold boiling water for the largest tea party I could host. It was golden, the pinnacle of the craftsman's art. It had whorls, it had curlicues, it had scallops, it had convolutions, it had involutions, it had dimples, it had excrescences, it had gibbosity, it had indentations, it had crenellations—it was utterly spectacular. And most magnificent of all was the design of the spigot. It was shaped like a ferocious eagle, its wings outstretched, its beak—I was about to run my fingers down it when I backed off. Its beak was razor sharp. I couldn't help tutting. It was an accident waiting to happen. I would have to remember this was an era before health and safety, and treat the samovar with extreme caution.

Charming litany. I quite like Princess Fergusovna. I also like her complete willingness to lust ever so discreetly after handsome young buck Sasha, whose beauty she first appreciates from beneath a sofa:


The young man's voice was light and attractive, the sort that you could listen to for hours on the radio. I wondered whether he had a face for radio as well.

He most assuredly does NOT have a face for radio, in that he is the protégé (pronounced by Shona, then all those who hear her, in the manner français, this reliably sends the Russians into fits of giggles for slightly obvious reasons) of a dreadful, lustful, stout, snobbish, evil-hearted countess. Her designs on his corpus delectable are strictly dishonorable, as are those of every other woman in St. Petersburg:


"I shall be waiting for you tomorrow afternoon," {a randy old widow} was saying.
"And I shall be counting the minutes until then," Sasha replied.
He was such a sweet guy. When he married Lidia, she would have to be careful that he didn't exhaust himself doing good works, and left some time for her.

You see, Miss Blaine wants Shona to infiltrate society's upper echelons to make sure beautiful, naive heiress Lidia gets her proper mate in this life. So Miss Blaine, through means undisclosed, gives Shona a house, a serf, and a lot of money. No one in St. Petersburg questions this apparition, it seems, accepting her story of being a Scottish peeress without question. And Shona, for her part, is a late-middle-aged matronly sort with peerless language and ninja skills, preternaturally acute hearing, and not one shred of common sense. Who cares who Lidia marries, especially a twenty-first-century feminist? Why go to all this trouble for someone who simply isn't that interesting, except that there needs to be a plot? And Shona's highly lusty crush on Sasha means she sees him as the proper mate for delectable little Lidia (who couldn't possible care less about him) in spite of a zillion unsubtle clues that she's got that wrong. (When she does get the right man for Lidia all set up, it's pretty much anticlimactic.)

But the journey's the thing, not the destination, right? I found trotting alongside Shona as she falls flat on her assumptions, picks herself up and carries on assuming (despite her new-found fondness for the aperçu "Never assume, it makes an ass of (yo)u and me" about which ::facepalm::) everything is about value of face as well as face value, to be a chuckle.

Not, however, a major one. This is a first novel and it is clear that the author hasn't quite got her hands around the neck of this clue-dropping thing just yet. She's quick with the witticism, johnny-on-the-spot with the dry double entendre, a dab hand with the mildly amusing misunderstanding and/or malapropism. All are inherent in slamming a bog-standard fiftysomething Scottish lady librarian (how Shona would *hate* that description!) into a culture much more patriarchal than the present Western one, and even though she endows Shona with amazing skills though without any solid explanation for them, the joke of the fish out of water works pretty well. For a while. By the end of the 250-page book I was really, really ready for the story to be wrapped up, and the couples (plural) to embark on their Russian lives, and Shona to get the heck back home. The throwaway bit at the very end about the blue paint made me guffaw, and sent me off away from the read with a much happier frame of mind that I would have been in otherwise.

Will I read the next one, assuming there is one? Maybe. I might. I could be persuaded. I will not, however, be waiting with bated breath for it to arrive. There are other, more deft, whimsical mysteries for me to read while the wait goes on.
Posted by Richard at 6:30 AM