THE DISPATCHER, a Scalzi novella that NEEDS to be filmed ASAP 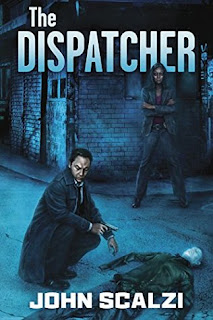 This was a Kindleborrow from my friend Roni. Thanks, ol' buddy ol' pal!

The Publisher Says: One day, not long from now, it becomes almost impossible to murder anyone—999 times out of a thousand, anyone who is intentionally killed comes back. How? We don’t know. But it changes everything: war, crime, daily life.

Tony Valdez is a Dispatcher—a licensed, bonded professional whose job is to humanely dispatch those whose circumstances put them in death’s crosshairs, so they can have a second chance to avoid the reaper. But when a fellow Dispatcher and former friend is apparently kidnapped, Tony learns that there are some things that are worse than death, and that some people are ready to do almost anything to avenge what they see as a wrong.

It’s a race against time for Valdez to find his friend before it’s too late…before not even a Dispatcher can save him.

My Review: There is nothing quite so satisfying as an idea that exactly fits into its chosen format. Subterranean Press, genre-publishing monadnock for almost a quarter century, will make novellas available in hardcover, will collect the stories of genre-famous writers that ordinary houses wouldn't deign to notice (eg, Elizabeth Bear, whose collected short work is coming in hardcover soon), will do all this with style and elegance and attention to quality unrivaled in modern publishing. This novella is no exception. Its limited edition, illustrated by Vincent Chong, whose work you should *definitely* go look at, is sold out; its trade edition is sold out; the ebook is available, and it's got the lovely illustrations scaled for your ereader's screen.

It ain't the Real Thing, but it's darn good.

Scalzi's story here is uniquely his, the way only he could re-fashion the story of unexplained resurrection. The dead coming back...but only if they died by misadventure (a politer way of saying "got murdered")...has no obvious explanation. Scalzi doesn't supply one. Arguments about why the murdered or otherwise killed before their body's natural death are endless. And the return itself becomes bureaucratized at the behest of insurance companies and governments. Of course. This is humanity we're talking about.

But in that larger, sadder framework, Author Scalzi's made stories of what the ordinary people caught in extraordinary circumstances will do. Must do. Crave the miracle? It's yours...but!

Why's there always a "but"? Dunno...but the "but" here is there are loopholes and limitations like there always are in bureaucracies. Why these should apply on a quantum level will keep religions in business and still reduce the murder rate by a large fraction. If someone is determined to murder someone else, there's always a way. It's a horrible way, but it works, and if you hate someone enough to murder them, its awfulness won't bother you.

A further "but" involves the revolting kind of human being who will pay to see men slaughter each other. Anyone who's read or seen Altered Carbon will recognize the Meth's entertainment of causing, watching, lusting after sleeve-death. This resurrection, of the actual personal body of the slain (albeit a certain number of hours younger than it was at the time of death), precludes Morgan's convenient stack-death or Neo-Catholic prohibition on being spun back up. It means the resurrected knows who killed them. It means the resurrected can identify a murderer. Unsurprisingly this drops the manslaughter rate. Can't charge someone with a crime, though, since the victim isn't dead. Assault maybe...but!

Then there are people whose bodies are slowly betraying them, who need surgeries and/or treatments that might cause death. Imagine how that's going to affect the surgeons. Insurance companies meddle enough in the quest to avoid paying out on their policies. Now there are Dispatchers (why the capital D, for goodness's sake?) whose sole job it is to finish killing a dying patient so they'll wake up in a pre-trauma state of health, no worse for the surgery that killed them. This is where we meet Tony. He Dispatches an old man who didn't survive heart surgery. He faces down an angry surgeon and a hospital staff pissed at him but without recourse because the money says this is what has to happen.

And *then* it gets weird.

Tony's friend and fellow Dispatcher Jimmy is missing. There's nary a lead in this disappearance; well, there's a hint that Jimmy might've been involved in some morally dark grey/legally light grey Dispatchings. Things that Tony was also involved in once upon a time. In fact, Jimmy got his start in the grey areas with Tony. Who better to help the Chicago Police Department investigate?

Tony's recruited, much against his will, to assist the police with their inquiries. Jimmy's wife spews hate and venom all over Tony for those problems from the past, and even threatens to run him down if she can since he'll just wake up naked in his own bed. The cop looks calmly on, resumes questioning, and the thread that Jimmy's wife accidentally picks out of the cloth of her marriage is the one that ultimately leads to the solution of a terrible, vile crime, the restoration of the scales of justice, and the end of the first episode.

Say what now? You see, the eight chapters in here constitute an excellent two-hour pilot script for a TV series I'd watch the hell out of. I like Tony, his policelady partner-in-crime, and the Chicago they inhabit. It's the kind of light entertainment that leads to much deeper thought and discussion if one's so inclined. How does the quantum field know someone's murdered? How would gawd justify allowing some to die, like by stupid accidents and illness, but allow the murdered to return, to get a second chance? What kind of crap laws will make it onto the books to ensure the rich stay rich and the banksters get their vig?

Pick it up, FX! Buy it now, TBS! This could, in modestly competent hands, be a water-cooler series. The nudity precludes Fox, The CW, CBS, NBC, or ABC from taking it on, but it's basic-cable ready. It's not quite highbrow enough for Prime or Netflix, and I want nothing good to happen to Disney+ because if y'all think Amazon's evil go do some research on the Reedy Creek MUD in Orlando. Dig a little into Anas Abdin's plagiarism claims over Star Trek: Discovery. These scumbags...

Well, never mind, I'm gonna leave it here with a rousing exhortation to go get you a copy of this delightful short read. Then let's all holler until someone in LaLaLand hears and obeys the injunction to film, film, film!
Posted by Richard at 6:30 AM