CONVENIENCE STORE WOMAN, how the world looks to someone who isn't like the rest of us 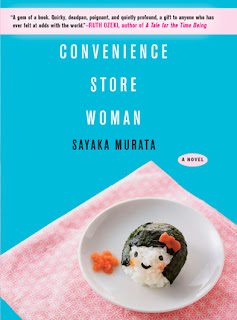 The Publisher Says: Keiko Furukura had always been considered a strange child, and her parents always worried how she would get on in the real world, so when she takes on a job in a convenience store while at university, they are delighted for her. For her part, in the convenience store she finds a predictable world mandated by the store manual, which dictates how the workers should act and what they should say, and she copies her coworkers' style of dress and speech patterns so she can play the part of a normal person. However, eighteen years later, at age 36, she is still in the same job, has never had a boyfriend, and has only few friends. She feels comfortable in her life but is aware that she is not living up to society's expectations and causing her family to worry about her. When a similarly alienated but cynical and bitter young man comes to work in the store, he will upset Keiko's contented stasis—but will it be for the better?

Sayaka Murata brilliantly captures the atmosphere of the familiar convenience store that is so much part of life in Japan. With some laugh-out-loud moments prompted by the disconnect between Keiko's thoughts and those of the people around her, she provides a sharp look at Japanese society and the pressure to conform, as well as penetrating insights into the female mind. Convenience Store Woman is a fresh, charming portrait of an unforgettable heroine that recalls Banana Yoshimoto, Han Kang, and Amélie.

I CHECKED THIS BOOK OUT FROM MY LOCAL LIBRARY. THANK YOU FOR ORDERING IT!

My Review: I dunno, y'all. Miss Furukura and Shiraha aren't people I'd want to hang with. I kept reading their names as "Lieutenant Uhura" and "Sriracha," which didn't help me identify them as actual people.

This is definitely a sharp, pointed tale. It takes on the internal and external expectations of women and their "proper" roles. It's a culture that is, in some disturbing ways, behind my own culture's flawed and unhelpful attitudes towards women. As this is a translation from a language with which I feel absolutely no kinship, I'll confine my observations about the writing to: this is a very quick read, possessed of enough narrative drive to make reading it with dilated eyes and a headache (as I waited to go home from an eye doctor visit) seem like a good idea. I was diverted, I cared a strangely large amount about Keiko Furukura, and while there was not one single surprise or twist in the tale, it was keenly observed and honestly told.


First we practiced the various phrases we needed to use in the store. Standing shoulder to shoulder in a line, our backs straight, we lifted the corners of our mouths to match the smiling face in the training poster and in turn called out the stock welcoming phrase: Irasshaimase! ... I was good at mimicking the trainer's examples and the model video he'd shown us in the back room. It was the first time anyone had ever taught me how to accomplish a normal facial expression and manner of speech.

I have never been so glad in my life as when Author Murata stopped banging my eyeballs with "Irasshaimase" about halfway through the book. I am one of those subverbal-vocalizers, and that phrase got my entire limbic system into an uproar because, although I know Japanese pronunciation is dipthongless, I could *not* scan that alphabet soup to save my life, and the YouTube videos pronouncing it for me made my nose hairs hurt. I think Japanese is a hideous language. Cool words, great concepts, please don't speak it to me.

Anyway. So Lieutenant Uhura meets Sriracha and things get weird. Only they don't because, well, they're exactly alike and while that's an awful thing to say, it's just the truth. She's one step away from a serious psychiatric break when she visits her younger sister and interacts (sort of) with her infant nephew. He (Shiraha) is already broken, beaten by expectations he is incapable of meeting. Her broken self's saving grace is that she knows *she* is the problem:


"Um, you do realize you'll be fixed?"
"What?" {Shiraha} asked, as if he hadn't heard right.
"Oh, nothing. Hurry up and change so we can do the morning practice!"
A convenience store is a forcibly normalized environment, so the likes of you are fixed right away I thought as I watched him taking his time getting changed. But I didn't say it out loud.

And that, in a nutshell, is why the tale kept me reading. I was fascinated against my will by the savvy that she brought to the problem of acting human when she quite simply isn't. She knows she lacks something, hasn't a clue what it is, and no one knows how to explain it to her; what she stumbles upon in the convenience store is a model she can emulate. A worker is supposed to BE the job in the convenience store and she needs someone to be. Perfection.

Poor Sriracha is an incel, as we call them these days, a loser/misfit/nobody whose essential wrongness comes from the other usual place this unsocialized-male issue comes from: He knows what being human means but he's too lazy to do it, then feels outrage and anger when he isn't given all the privileges being a human male customarily affords the Y-chromosomally endowed. Lieutenant Uhura can't grok this, since she's a hard worker and a genuinely indifferent-to-normal-humans person. She doesn't feel excluded, as he does; she realizes she is excluded and takes steps to minimize the exclusion so others will feel happier:


You eliminate the parts of your life that others find strange—maybe that's what everyone means when they say they want to "cure" me.
These past two weeks I'd been asked fourteen times why I wasn't married. And twelve times why I was still working part-time. So for now I'd decide what to eliminate from my life according to what I was asked about most often I thought.
Deep down I wanted some kind of change. Any change, whether good or bad, would be better than the state of impasse I was in now.

So fiction about the neurodiverse made my uncomfortable day of eye-doctoring, riding back and forth in a cramped position, and having to soak the bloodstains from my knee-rocks breaking through the skin due to sitting *ptooptoo* on sitting! for five hours, bearable. That by itself deserves praise. It's hard to know what to do about recommending such a quirky tale to others. In general, I'm against "must read" recommendations in all but a very few cases. I think this read will quite rightly polarize people's opinions, as did that "Completely Fine" thing that made me so bone-rattlingly mad that I Pearl-Ruled its condescending self. But this story, told by a person whose grasp on how to be human was tenuous and whose desire to figure it out was other-directed, is a different matter altogether. I might not love the way it ended, which I won't discuss, but I fully agree that it was an inevitable ending. I ended up glad I'd read it, and that's saying something.
Posted by Richard at 1:56 PM