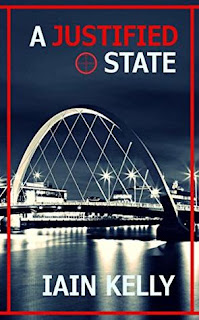 The Publisher Says: In the future, The State is ruled by the socially reformist Central Party Alliance. Poverty and homelessness have been eradicated, but overpopulation, an energy crisis and an ongoing overseas war are threatening the stability of the country. When a local politician is assassinated, Detective Danny Samson finds himself thrust into the middle of the investigation. Still grieving for his dead wife and children, Danny tracks down the assassin, an ex-military sniper called Gabriella, only to discover she may not be the real villain.

The secret behind the murder of one politician may bring down the entire ruling Party, and Danny soon learns those in power will go to any lengths to protect The State. Joining forces with Gabriella and the mysterious government agent Phillips, Danny must unearth the truth and bring the guilty to justice, before they catch up with him first.

My Review: No one is talking about this book and I can not figure out why. I think it's superb. A Justified State is really dark, involving, and quite exciting. Think Enemy of the State only written by Philip K. Dick in an unusually grim mood. It's near-future, like the In Death series, and can't fairly be classed with them because the stakes are SO. VERY. HIGH.

The world is, as I suspect you know by now, going directly to hell in a very cramped handbasket. There are 7.5 billion of us, and the planet's ability to support us all is creaking. That's not because of scarcity of resources, mind you, it's because we distribute resources in truly pathological ways. The COVID-19 pandemic during which I am writing this review, and whose assault on my nerves I read this book to mitigate, has thrown this 2018 title's central thesis into bright relief. Things, in Detective Danny Samson's unnamed-but-evidently medium-future Glasgow, are both better...the environment is recovering, the sea-level rises we're going to get (don't bother equivocating, they're coming so make your plans accordingly) are well-mitigated...and worse...we're all forced to live in Social Housing cubes, prefab characterless nightmares of conformity, and while no one is hungry only the very top echelons regularly eat natural foods. (None of this, BTW, is remotely far-fetched as we're in this situation today; you're just not used to looking at it from that angle.)

The electric grid that sustains dense city immense population is struggling. The lifespan of an average citizen is about 110 years; Danny's not quite middle-aged at 47. But it's not the years, it's the mileage, as Danny's life ceased to have any meaning after his twin children died shortly after birth, followed by his wife's depression and suicide. No one is going to be chipper under these circumstances. Danny, as a State Police Officer, is forced (note verb) to take compassionate leave to process his losses. When the story opens, a murder is in process; the lucky State Police Detective to draw the short straw of investigating the first violent homicide the City has seen in who-knows-when is Danny. That the murdered man is a Consul, a high but local State official, suggests to all and not least to Danny, that the desired result of the investigation isn't The Truth Coming Out, but the forms being filled out and filed. He's dead, it's awful, what's next.

I'll tell you what's next: Danny the Depressed needs answers because he's lost love, he's lost purpose, and he's rapidly losing the little faith in Humanity he's clung to. Solving a man's murder, even a man as far "above" Danny as the dead Consul was, will enable Danny to restore ma'at, will bring a deal of justice to a world where even-handed has been defined as fair. The reason the opening murder is committed will, I promise you, set your preconceived notions on their ear. It's a deep and twisty thing, power, and grabbing it makes enemies.


Where there were those in power, those with more wealth, they would always seek to rise above those below them, to maintain their position and protect their interests.

I do not care what kind of social system, with what kind of social controls on thought and behavior, people invent, there will be someone who will find a way to subvert the purpose of the situation for their own gain. Every system starts with a purpose, often a laudable one; we, the hoi polloi, are assured that ALL must obey the strictures put in place to benefit the many at the expense of the few.


Openness and transparency, those were the cornerstones of the Central Alliance Party that had swept to power after years of corrupt and ineffectual governance. If {the Party} had the ability to fake {location} data, then {police} reports were at best meaningless and at worst providing alibis that allowed State leaders to go wherever they wanted and do whatever they desired.

It will surprise you to learn that this is, in fact, the least of the worms crawling out of the can that Danny and his weirdly assorted not-enemies (it's too much to call them "allies") have collectively opened. This is an iceberg whose long gestation has caused much, much displacement in the ocean of Danny's life.

I can't go more into that because the Spoiler Stasi will shriek at and dive-bomb me. (An unpleasant experience, I've found, and to be avoided even if their sensitivity seems to me outsized and outlandishly emotional.) But this is a book I want you to read, so I won't spoiler the real, and utterly appalling, motive for the murder of the Consul. The deaths that follow are, in fact, all tied to the central horror, the unbelievable (and I mean this literally, you will not want to believe the central crime could ever happen) cruelty and vileness, which the Consul set in motion.

Seriously, y'all, this book's been out there 18 months and it's not a bestseller yet?! Hop on it! Three bucks for five hours'-worth of twisty, dark, well-plotted, tautly paced, and almost entirely well-thought-out worldbuilding telling a deeply heartfelt moral story.


******CODA******
I do have a few minor cavils. There are, in this Brave New World, some absences that are carefully explained. No bars, casinos, or parties; only State-approved music; one mass celebration allowed, the New Year. No old-fashioned dwellings with things like fireplaces. Not in generations. And yet Danny knows how to tend a fire? And Danny knows the barman behind the bar in an illicit casino (a word he shouldn't know, a concept he shouldn't have) how exactly?

But these are cavils. I can probably MacGyver up a patch, to do with the fact that Danny's father was older when he was born and his great-grandfather was a known troublemaker, something like that. But honestly when I am so enrapt and fully invested in the story, I don't much like having to retcon myself. Call me crazy but that's the author's job to my mind.
Posted by Richard at 4:20 PM