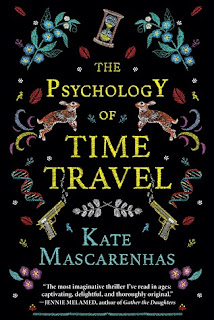 THE PSYCHOLOGY OF TIME TRAVEL
KATE MASCARENHAS
Crooked Lane Books (non-affiliate Amazon link; the publisher's site does not have any information about this title)
$7.99 Kindle edition, available now

The Publisher Says: In 1967, four female scientists worked together to build the world’s first time machine. But just as they are about to debut their creation, one of them suffers a breakdown, putting the whole project—and future of time travel—in jeopardy. To protect their invention, one member is exiled from the team—erasing her contributions from history.

Fifty years later, time travel is a big business. Twenty-something Ruby Rebello knows her beloved grandmother, Granny Bee, was one of the pioneers, though no one will tell her more. But when Bee receives a mysterious newspaper clipping from the future reporting the murder of an unidentified woman, Ruby becomes obsessed: could it be Bee? Who would want her dead? And most importantly of all: can her murder be stopped?

Traversing the decades and told from alternating perspectives, The Psychology of Time Travel introduces a fabulous new voice in fiction and a new must-read for fans of speculative fiction and women’s fiction alike.

THE PUBLISHER APPROVED A DRC OF THIS TITLE VIA NETGALLEY. THANK YOU.

My Review: Okay. This is hard. I can't explain why I didn't give this fascinating, layered, reality-twisting novel of ideas less than five full stars without spoilering the hell out of the ending.

Let me approach this from the side. I remember a few details from the past, when there was one digit in my age. I don't claim, at this late date, that they are factual and accurate; way too much time has passed, way too many things look completely different to my grandfatherly self than they *could* have to my kid self. So is that The Past, my version of the past, a fantastical creation of my imagination, some combination of these (and other) angles of view? Is something new created, something old altered, is there any way imaginable that this paradox could be resolved with technological time travel? Or would that just make things a lot worse?


“Maybe being in charge of time and space would give anyone a god complex, but she’s such a mean god.”

Reader, this novel does not answer those questions. It does not approach your experience of its story universe from the position of *giving* you answers; it demands of you that you spend significant mental energy creating answers for yourself, using the story's elements (note I did not call them facts) to sort out who actually intended to be good and create happiness for the greatest number of souls.


“Rules exist for a reason.”
“Yes, to stigmatize people.”
–and–
“Sometimes, we have a moral duty to break the rules. Particularly where the rulemakers are corrupt.”

The answer is not the one you expect it to be. Or it wasn't the one I expected it to be. So I think you're likely to be led down the strange and winding thread of the screw bolting the monster's head to their body, directly into a concrete slab, and left there to wonder just what exactly happened while you thought you were reading a fun little entertainment about women empowering themselves in the world of 1967.


“Remember that. When you go, you want to have people you love to think about. You need enough money to feed yourself, and a sense of purpose is nice. But the rest is superfluous.”