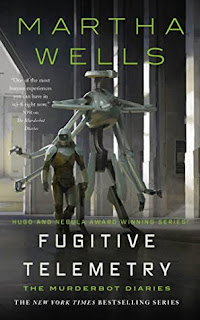 The Publisher Says: No, I didn’t kill the dead human. If I had, I wouldn’t dump the body in the station mall.

When Murderbot discovers a dead body on Preservation Station, it knows it is going to have to assist station security to determine who the body is (was), how they were killed (that should be relatively straightforward, at least), and why (because apparently that matters to a lot of people—who knew?)

Yes, the unthinkable is about to happen: Murderbot must voluntarily speak to humans!

I RESERVED THIS BOOK AT MY LOCAL LIBRARY THE *INSTANT* I FOUND OUT IT WAS COMING OUT!

My Review: This is a locked-room murder mystery with Twelve Years a Slave overtones. Much much good action and some serious character development. Don't start here, but don't let the door hit you standing around waiting for it to go on sale before reading it.

When we come onto Preservation Station, we're greeted by a world that...doesn't work like the one you and I are used to:


(Preservation had two economies, one a complicated barter system for planetary residents and one currency-based for visitors and for dealing with other polities. Most of the humans here didn’t really understand how important hard currency was in the Corporation Rim but the council did, and Mensah said the port took in enough in various fees to keep the station from being a drain on the planet’s resources.)

Thus Author Wells makes plain that Preservation Station and Alliance doesn't exist on the Corporate Rim's terms...it interfaces with them, but doesn't make their system its own. I'd wondered about that. I'm very grateful she took the time to say out loud (well, in parenthesis, where Murderbot says a lot of important stuff) what I'd been trying to figure out.

What isn't hard to figure out is what Murderbot's appeal is to us unaugmenteds:


...the humans on the Station wouldn’t have to think about what I was, a construct made of cloned human tissue, augments, anxiety, depression, and unfocused rage, a killing machine for whichever humans rented me, until I made a mistake and got my brain destroyed by my governor module.
–and–
(I don’t know why bot behaviors that are useless except to comfort humans annoy me so much.) (Okay, maybe I do. They built us, right? So didn’t they know how this type of bot took in visual data? It’s not like sensors and scanners just popped up randomly on its body without humans putting them there.)

There's nothing more fun than hearing your inner monologue made outer by a belovèd character speaking it in words. I, too, find the stupid soothing behaviors necessary to interact as frictionlessly as possible with people I don't like very irritating...especially when they get in the way of accomplishing stuff that needs doing, now.

What makes the series especially appealing to me, apart from Murderbot, is the grace notes that Author Wells give us. Murderbot came close to getting a sidekick bot this installment, and something suggests to me that it could still happen. A bot working in the hotel where Murderbot has traced our murder victim to is **eager** to help with the investigation. Murderbot isn't eager to be helped once it has what it needs. "(The bot’s name is Tellus. They name themselves and hearing about it is exhausting.)" thinks Murderbot of the poor basic bot. Now go look at the layers in this simple throw-away here. "Hearing about it is exhausting" doesn't even *begin*, Murderbot! But what a lovely easter-egg for the restlessly curious.

Then there's Murderbot's ongoing quest to discover what its origins mean. The corporate entities out after Murderbot and its chosen family (Dr. Mensah and her folk) have occupied Murderbot's threat-assessment module and its tactical programs for so long that it hasn't seen how very human it's becoming:


Maybe I’d been waiting too long for GrayCris to show up and try to kill us all. I was thinking like a CombatUnit, or, for fuck’s sake, like a CombatBot.
–and–
I pulled the schematic from the instructions and found the transponder was buried in the sealed drive unit.
Oh, you have to be kidding me. I’d be pissed off at the humans but I had brought this thing up here without checking.
–and–
This meant no bot pilot that I could get information from. That was depressing. I had no idea what else I was supposed to do as a member of this group and just following humans around listening to them talk felt a lot like just being a SecUnit again. I mean, I am a SecUnit, but … You know what I mean.

Yes, Murderbot, we all know what you mean. It's the way many of us feel a lot of the time, too. You'd be amazed how human you really are.

And don't stalk off all offended. You're really the best of us, not just the rest of us. Not Festivus for you. Now what's wrong with me, warbling these praises but not giving the story the Full Five? It's the dull thud of a dropped plot-point that I needed more of...what the heck was Lutran doing all those years to stay off Preservation Station's radar? Did the smugglers plant the eventual murder weapon and then have it hacked against them? *aaarrrgh*

So no perfect score for you, Author Wells. Harrumph.