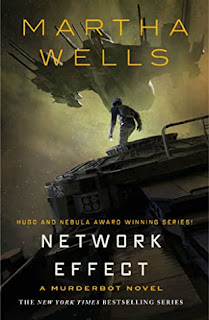 You know that feeling when you’re at work, and you’ve had enough of people, and then the boss walks in with yet another job that needs to be done right this second or the world will end, but all you want to do is go home and binge your favorite shows? And you're a sentient murder machine programmed for destruction? Congratulations, you're Murderbot.

Come for the pew-pew space battles, stay for the most relatable A.I. you’ll read this century.

I’m usually alone in my head, and that’s where 90 plus percent of my problems are.

When Murderbot's human associates (not friends, never friends) are captured and another not-friend from its past requires urgent assistance, Murderbot must choose between inertia and drastic action.

Drastic action it is, then.

I CHECKED THIS BOOK OUT OF MY LOCAL LIBRARY. SUPPORT YOUR LIBRARIES, FOLKS! THE PANDEMIC AIN'T THE ONLY REASON TO GO THERE.

My Review: When you get to the moment in reading a series of stories that you think you know what's coming next, and then you're kinda right but a whole lot wrong, that's when you know for sure you're in the right place at the right time.

I knew for sure I'd get Murderbot being its deeply cynical, snarky self, breaking the fourth wall at will and to great effect.


{We're in the shit because of} their hired security service Palisade making an extremely bad decision to punch my ex-owner bond company in the operating funds by attacking one of its gunships. (The company is paranoid and greedy and cheap but also ruthless, methodical, and intensely violent when it thinks it’s being threatened.)
–and–
So that was what had happened before the survey. Now we’re here, ready for the next major disaster. (Spoiler warning.)

I didn't realize, though, that the ART (acronym; you know already or you need to find out for yourself) and Murderbot would make this read the emotional rollercoater it is. (Yes, of course there are quotes to make this obvious but I can't spoiler-tag on my blog. Go here if you're that curious. But it's a MAJOR spoiler!)
—but there is this that I *can* quote, spoken by Murderbot after a serious, serious event takes place, one that changes the entire stakes of the novel: "My performance reliability had leveled out at 89 percent. Not great, but I could work with it. I still hadn’t identified the source of the drop. I’d taken multiple projectile hits without having that kind of steady drop." Which is a theme developed so well in this full-length novel. The problem of grief, of rage and loss, is universal; Author Wells hasn't, at any point in the series, hidden her cards in this regard. But the stakes, the sheer centrality of loss and rage and grief, take the Up escalator in this novel. Maybe Ratthi, a human and client of Murderbot's over the course of multiple stories, says it best: “Anyone who thinks machine intelligences don’t have emotions needs to be in this very uncomfortable room right now.”

Amen, Brother Ratthi. If anyone who's read more of the series (and if you haven't what the heck are you doing reading this review?!) wonders about how huge the change of tenor in this full-length novel is, I offer this:


Ratthi had said, “I think you should let it go for a while, at least until we get ourselves out of this situation. SecUnit is a very private person, it doesn’t like to discuss its feelings.”

This is why Ratthi is my friend.
–and–
(If I got angry at myself for being angry I would be angry constantly and I wouldn’t have time to think about anything else.) (Wait, I think I am angry constantly. That might explain a lot.)

Murderbot. Calling a human, a (former) client, a being under its protection, a friend is a moment to make a person pause. Then for Murderbot to acknowledge, with great precision, its emotional state...!

Then again this is the thing about reading this series, unlike reading many, many others: Author Wells is making something clear to us, in her inimitable sly way, that not many of us think about. She demands that, in loving and accepting the reality of Murderbot, that we contemplate the source of Murderbot's conundrum. Murderbot is a possession, chattel, a Thing:


(I know, it’s a logo, but I hate it when humans and augmented humans ruin things for no reason. Maybe because I was a thing before I was a person and if I’m not careful I could be a thing again.)
–and–
And of course the humans had trouble understanding that your governor module suddenly deciding to melt your brain wasn’t something you could rules-lawyer your way out of.

Like the SecUnit that Murderbot began its existence being and Dr. Mensah rescued it from continuing to be, there was a device installed in its organic brain that could cause it immense pain or simply end its existence...can't give a Thing power, like weaponry-power and tactical nous, without safeguards....

So be clear: By taking on this addictively funny series, you're taking on a level of self-reflection that, while salubrious and even vital it may be, it is also deeply uncomfortable:


Just because we’re both rogue SecUnits doesn’t mean we’re going to be friends, but I knew if it went back, it would be dead. I’d hacked my governor module and kept doing my job because I didn’t know what else to do (except you know, a murderous rampage, but murderous rampages are overrated and interfere with one’s ability to keep watching media) but that was different from escaping and then going back.

This is Murderbot caring for a fellow SecUnit whose existence as chattel, a Thing, it is trying to end. There is no guarantee that ending the other's slavery will make it a fellow seeker after the Meaning of Freedom; it won't even guarantee that there won't be mayhem and disaster to clean up after. But it will for sure and certain mean that the other SecUnit won't be under any compulsion to do anything.

I've failed to give this novel a perfect score of five-out-of-five. The reason is simple to the point of being petty: The pace is irregular and it's not because the story needs it to be. Author Wells has written numerous novels before this (here's her bibliography) so there is no reason this novel should suffer from an avoidable fault. There are some scenes whose nature means they could've been cut or cut down (eg, the invaders the Scooby-group need to fight get more screen time than is necessary for non-repeating characters), there are some repeated references to Murderbot's happiness that it has no digestive system that were over-done...but none of these things did more than ding the paint on my gloriously chromed, befinned behemoth of Joy at spending a whole novel with Murderbot, ART, and the annoying humans they hang with. 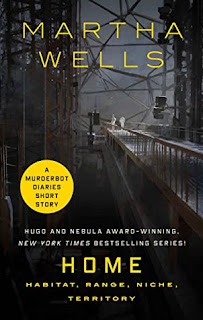 The Publisher Says: This short story is told from the point of view of Dr. Mensah and follows the events in Exit Strategy.

THIS IS A TOR.COM FREE READ. THANK YOU FOR MAKING SUCH WONDERFUL WORK FREE FOR ANYONE TO READ, GENTLES ALL.

Because they are all refugees in the Preservation Alliance, descended from people who were left to die because rescue was deemed not cost-effective.

Which is why I read the Murderbot series the instant I can get the books. This is a short freebie that's just a tick before Network Effect, and it's deeply refreshing to read something from Dr. Mensah's PoV.

Not that I don't adore Murderbot! I do! But breaking out of the one PoV that we have on the Corporation Rim is a breath of fresh air.

The Corporation Rim has always been a slave state, though it calls its institutionalized slavery “contract labor.”

It is through Dr. Mensah's clarity that I feel so seen in my hatred of this system's brutal, dehumanizing, and revoltingly deeply entrenched dominance of the hearts and minds I must live among, as Preservation is a fictional construct. It would be the work of but a moment for me to apply for asylum or whatever they call it to get to Preservation were it real.


It’s about being treated as a thing, isn’t it. Whether that thing is a hostage of conditional value, or a very expensively designed and equipped enslaved machine/organic intelligence. You’re a thing, and there is no safety.

When you exist at the whim of the electorate, as people like me...disabled, unhomed, elderly, infirm...must do, you're a thing. A profit point. An expense center. Not yourself, not someone with a lifetime's issues and lessons. I'm fortunate that I live in a place that allows me to be as independent as possible, and that I did enough useful work for enough years that my (HUGELY reduced in value) investment in government debt affords me the relative safety of housing, medical care, and therapies that I need. Had I stayed in Texas, had I been darker of skin hue, had I not had the mind-boggling good fortune to have my breakdown while talking to the one person who could, and would, and did help me...well, I'd be dead, and that's just the facts.

It's why I identify so deeply with Murderbot: We had all the right things go exactly right at the right time or we'd simply have ceased to exist.


And {Dr. Mensah} tells herself: you’re being very foolish. Because you were a hostage for a period of days, and it was a minor inconvenience compared to what Murderbot— No, SecUnit; she’s never been given permission to use that private name. What SecUnit went through.

And if someone else was in her position, she would tell them how unhelpful comparisons like that are, that fear is fear.

But you're making one right now. You can't help it; it's human nature. One person with whom I am no longer friends said to me, "stop being so selfish and think of how much worse it is for my (Hispanic) people!"

Invalidation = abuse. Always, in all ways.

And that is what Author Wells does so eloquently by not doing it directly: She holds up your status as abuser while acknowledging your status as the abused. Murderbot...SecUnit to Dr. Mensah and the meatsacks inhabiting its spacetime...isn't kidding around with its self-granted yclepture. It was the more harmed, in my opinion, by its status as legally insentient property being thrust on it from...birth?...its creation, anyway...(aka "chattel slavery") but it isn't innocent of abusive, life-denying behavior towards others.

Do moral dilemmas come more tightly coiled up on themselves than this? And breathes there an author whose exploration of these intense and weighty issues is so delightfully deft and assuredly airy than Author Wells?