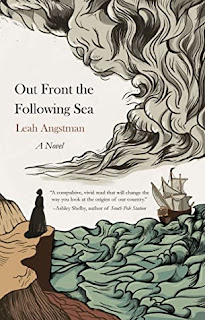 The Publisher Says: Out Front the Following Sea is a historical epic of one woman’s survival in a time when the wilderness is still wild, heresy is publicly punishable, and being independent is worse than scorned — it is a death sentence. At the onset of King William’s War between French and English settlers in 1689 New England, Ruth Miner is accused of witchcraft for the murder of her parents and must flee the brutality of her town. She stows away on the ship of the only other person who knows her innocence: an audacious sailor — Owen — bound to her by years of attraction, friendship, and shared secrets. But when Owen’s French ancestry finds him at odds with a violent English commander, the turmoil becomes life-or-death for the sailor, the headstrong Ruth, and the cast of Quakers, Pequot Indians, soldiers, highwaymen, and townsfolk dragged into the fray. Now Ruth must choose between sending Owen to the gallows or keeping her own neck from the noose.

Steeped in historical events and culminating in a little-known war on pre-American soil, Out Front the Following Sea is a story of early feminism, misogyny, arbitrary rulings, and the treatment of outcasts, with parallels still mirrored and echoed in today’s society.

My Review: I've been acquainted with, and even published by, Leah Angstman for the past decade. I am absolutely sure that I'd've rated this book even more highly if I hadn't been...such are the wages of sin, I'm afraid. I'm extra sure that nothing I've read in this COVID year has affected me as much as the tale of Ruth, a child of sixteen!, suffering under the sheer violent rage of an entire community of religious nuts. Regulars will recall my affection for the comic book Prophet Against Slavery, which trod similar outcast-for-being-honest ground. At least the Quaker prophet Lay was outcast, cruelly treated, with more than one slender reed of lovingkindness to support him...and I think Ruth's belovèd Owen, his oft-professed love for her notwithstanding, was a slender reed indeed...while being *actually*guilty* of what they accused him of.

That is not the case in this story.

Ruth's powerful mind, her greatest curse in a society that mistrusts women whole and entire but smart women most of all, also leads her to the only possible solution to her impossible conditions (given that the local Pequots aren't going to risk a world of trouble to take her in although they do offer her more honorable assitance than she had a right to expect)...and straight into a situation where she's in the path of life-storms and STORMS!!

It is as breathless a ride of a read as I'm able to take at my advanced age.

What made me invest myself so deeply in this unflattering depiction of theocratic society from the outside was my antipathy towards That Kind of Person. What kept the pages turning was my need to know: Are Ruth and Owen going to make it to the last page? will their love be rewarded with togetherness? And, this being a romantic novel not a category romance, there is no way to be sure. And I'll not spoil that for you.

(That was me being very cruel, but only to be kind...you need to read this book.)
Posted by Richard at 6:30 AM