A GUIDE TO THE BIRDS OF EAST AFRICA, sentimental and charming and moving 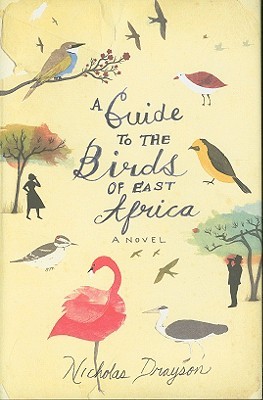 The Publisher Says: For the past three years, Mr. Malik has been secretly in love with Rose Mbikwa, a woman who leads the weekly bird walks sponsored by the East African Ornithological Society. Just as Malik is getting up the nerve to invite Rose to the Nairobi Hunt Club Ball (the premier social occasion of the Kenyan calendar), Harry Khan, a nemesis from his school days, arrives in town. Khan has also become enraptured with Rose and announces his intent to invite her to the Ball. Rather than force Rose to choose between the two men, a clever solution is proposed. Whoever can identify the most species of birds in one week’s time gets the privilege of asking Ms. Mbikwa to the ball.

Drayson's charming descriptions of the Kenyan wildlife and his sharp take on the foibles and follies of the people and politics sketch a rich picture of contemporary life in Nairobi. Fans of Alexander McCall Smith will delight in this transporting and witty novel.

My Review: Actuarially, I am past middle age. In fact, more than 90% of the world's population is younger than I am. And that shows in the things I care about, read, and buy. Advertisers, take note: Old folks in America are *not lying down to die*! Pay attention to us!

Like the author of this book did. Mr. Malik, a widower and Mrs. Mbikwa, a widow, both of a certain vintage, are the focus of the love story in this book. Each has lost a well-loved spouse, each is living a full, interesting life and each is aware of a...space, an unfilled spot, in life. So what do they do? They go watch birds.


It's happened to me, and it's probably happened to you. From the first exchange of good mornings they had recognized in each other a kindred soul. Though neither spoke much to start with, they felt an immediate ease in each other's company that was both surprising and yet the most natural thing in the world.

God, doesn't that sound dull? It's not. It's just the starting point for a deft, elegantly made meditation on what love means and how love is transmitted, received, and propagated in ever-larger and more complete circles. Drayson creates Rose Mbikwa, nee Macdonald, as that hardest to portray character: the lively, sad, solitary widow of a charismatic man. Her loss and her life are completely, and concisely, and elegantly drawn in less time than lesser prose stylists take to make minor characters. Mr. Malik, a complex and private man, isn't so much drawn as peeled, layer by later, until the things we think we know about him become...well...iceberg-tips of the cold, sad, lonely sea inside him.

But...and this is the biggest but I can imagine...he's *never* whiny, self-pitying, self-obsessed, nothing like that oh nay nay! He's a force in his own life and he's working on making it, and as much of the world as he touches, a better place.

The spirals Drayson spins as Mr. Malik and Mrs. Mbikwa orbit each other are always tightening and yet never constricting or confining our perceptions...this is good stuff, ladies and gentlemen! Good, good craftsmanship and an excellent storytelling eye.

I'd say do yourself a favor and read this book. It's short, only about 200pp, and it's fun, and it's got great substance. Most highly recommended.
Posted by Richard at 12:44 PM