ACCEPTANCE gets more stars than its prequels 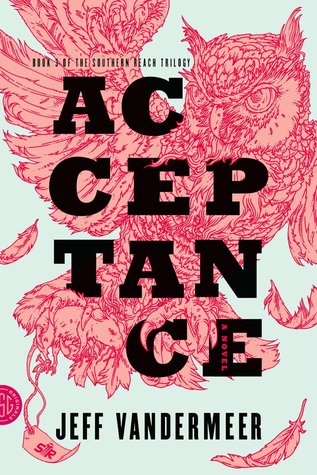 Rating: 4* of five, mostly for the ending

The Publisher Says: It is winter in Area X, the mysterious wilderness that has defied explanation for thirty years, rebuffing expedition after expedition, refusing to reveal its secrets. As Area X expands, the agency tasked with investigating and overseeing it--the Southern Reach--has collapsed on itself in confusion. Now one last, desperate team crosses the border, determined to reach a remote island that may hold the answers they've been seeking. If they fail, the outer world is in peril.

Meanwhile, Acceptance tunnels ever deeper into the circumstances surrounding the creation of Area X--what initiated this unnatural upheaval? Among the many who have tried, who has gotten close to understanding Area X--and who may have been corrupted by it?

In this last installment of Jeff VanderMeer's Southern Reach trilogy, the mysteries of Area X may be solved, but their consequences and implications are no less profound--or terrifying.

My Review: It's a frustrating thing to wait for a book, a series, an idea to cohere. When it fails to happen, the result is usually a sense of letdown at the very least, and not infrequently outrage and betrayal. And here I am rating this incoherent (in the nice and accurate sense) final volume as the best of the lot.

The Big Reveal of this series doesn't need to be coherent (again used in the nice and accurate sense). It is big enough, titanic in fact, that any attempt to fit it into a pleasantly proportioned package would merely be absurd. This is a rare case of a resolution needing enough room to encompass the beginning all over again, since there is no conceivable way the results of Area X's existence for the reasons it exists will stop reverberating in each and every iteration of each and every possible future that flows from it.

Was that vague enough for you? See, there's nothing I can be specific about except at the certainty of spoilering every development in each book. That being the modern era's Worst Imaginable Sin, I'm avoiding the lynch mobs that roam freely over the internet. Let me give you a clue that won't be a clue unless you've read the series: The parable that seemed tantalizingly just beyond reach is here full-blown at last. What Area X represents in all its strangeness and its inscrutability can't be made any clearer than it is in the book, even though as you're turning the last few pages you're going to have a raft more questions than you started the book with. And that's a good thing.

Philosophically VanderMeer's point, well one of his points anyway, could not possibly be more timely than it is right now on the cusp of the Arctic's final descent into deglaciation. A piece of the planet is in reality changing before our (appalled) gaze into something that isn't quite set yet. The reasons aren't mysterious, in the case of the Arctic, but the consequences are equally bizarre, unpredictable, random. The planet isn't going to remain the same. The consequences for some, even many, individuals are going to be as condign as they are in the book. The authorities are as nugatory in the face of out planetary changes as they are in the book. The public is as...oblivious? unconcerned? flip?...as is the shadowy, gesturally indicated public of the book.

This series of books isn't a Rubik's cube of a story. It's a Seurat painting of lore. Enjoy that? This is a series for you. What befuddles me is how Alex Garland, the director, plans to make any kind of coherent film out of Annihilation alone. Natalie Portman and Jennifer Jason Leigh will show us, one supposes, when the film is released in 2017. Please dear goddesses, please don't let it be a hugely overlong, incoherent mess like 2012's Cloud Atlas.
Posted by Richard at 9:45 PM