THE BIG NECESSITY, a funny book about an icky subject that's extremely important 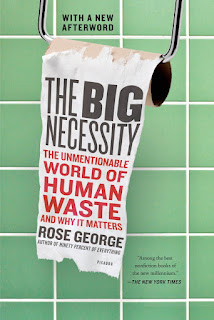 The Publisher Says: Produced behind closed doors, disposed of discreetly, and hidden by euphemism, bodily waste is something common to all and as natural as breathing, yet we prefer not to talk about it. But we should—even those of us who take care of our business in pristine, sanitary conditions. For it’s not only in developing countries that human waste is a major public health threat: population growth is taxing even the most advanced sewage systems, and the disease spread by waste kills more people worldwide every year than any other single cause of death. Even in America, 1.95 million people have no access to an indoor toilet. Yet the subject remains unmentionable.

The Big Necessity takes aim at the taboo, revealing everything that matters about how people do—and don’t—deal with their own waste. Moving from the deep underground sewers of Paris, London, and New York—an infrastructure disaster waiting to happen—to an Indian slum where ten toilets are shared by 60,000 people, Rose George stops along the way to explore the potential saviors: China’s five million biogas digesters, which produce energy from waste; the heroes of third world sanitation movements; the inventor of the humble Car Loo; and the U.S. Army’s personal lasers used by soldiers to zap their feces in the field.

With razor-sharp wit and crusading urgency, mixing levity with gravity, Rose George has turned the subject we like to avoid into a cause with the most serious of consequences.

My Review: The crapper. The toilet. The convenience. The Porcelain God. Of them all, it's the last one that's the most correct. We should worship the waste-disposal vessel in every American home, because it and the infrastructure that supports it, invisibly to the end users, make modern life as clean, comfortable, and healthy as possible.

Rose George has done us all the service of surveying the world's various systems and non-systems of waste disposal. She reports from the front lines of poop removal all over the planet, and let me just say that, after reading her reports, I am profoundly grateful to her that I now know what I do, without having to go and see and experience and smell all the things she did.

An entire caste of women exist in India who make a living scooping poop. Not dog poop, either. A whole continent, Africa, has dams and irrigation canals and other water control systems, and vanishingly small numbers of waste-disposal plants; water-borne illnesses, usually code for “fecal bacteria contaminated water”, kill millions there.

Aid donors don't want to pay for sewerage systems. Not glamourous enough. Local authorities don't know what to demand. The populace doesn't know there's another possibility. So generation after generation after generation gets sick, most often dies young, and all for the lack of a few lousy billions spent on treating human waste. Billions, to a country like this one with an annual income in the multi-trillions, ought not to be a big deal. Wouldn't be, either, if we hadn't spent several trillion bombing people who did nothing at all to us. Had to use the Chinese sugar daddy's credit card to do it, too. Now our grandkids will be lucky if they get clean water, since the asshole elite spent all that borrowed money on doing nothing worthwhile.

Oh dear, I'm off on my anti-conservative ranting again. Sorry. This book made me madder'n a swatted wasp. It makes me want to hurl when I read about the idiot Wall Street banks and bankers whimpering about their taxes, and how poorly they're spent on things like roads and bridges and health care and schools. Next up, and I am dead serious about this, next up is clean water. Privatize it, like the English did! Like we did with cable and phones! (How much more do you spend now on your phone than you did 30 years ago? I found an old bill from May 1984...$25. Now, over $200. Inflation doesn't account for but about half that increase.)

So when dysentery carries off your 90-year-old mother or your grandbaby, conservative voters, do not even think about complaining. YOU DID IT.
Posted by Richard at 7:49 AM