SOMETHING TO WRITE HOME ABOUT, a story collection you'll have to work to find 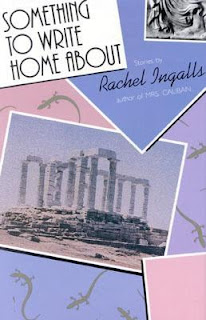 The Publisher Says: Devoted readers of this perceptive writer will recognize her subtle ability to reveal the most profound observations through seemingly small and ordinary happenings. Those not yet familiar wit her work will find themselves inspired by her magical craftsmanship to closely examine their own experience as they seek answers about the world around them.

My Review: Ms. Ingalls died this past March 5th. I've got this collection of her short stories out of the library for a short while longer. I want to absorb a bit more of what the inspired author left us, and this was the first book I found that I didn't have to get from a different library system.

Theft retells the crucifixion story from one of the thieves' point of view. Horrifying. The details of his dying, the cruelty of the world, all mashed up with the expectation that I was reading about the Jim Crow South suddenly morphing into clarity about the actual subject...the sheer, gut-churning *awfulness* of realizing this story's timelessness has many, many facets and not all of them are facile...the hideous way the world in its unchanging indifference crushes the already fallen and, uncaring, grinds on.

This Easter is a notable one. I've read something about the subject that has instructed me and edified me. All it took was a talented writer telling a coherent story!
2019 UPDATE I learned from the April 2019 Longreads piece that this was published as a novella and "{i}n 1970, Theft won the Authors’ Club First Novel Award in Britain."

The Man Who Was Left Behind follows Mackenzie, a WWI vet whose life was derailed by tragedies. I so empathized with him, I live among people like him, I am myself like him; a man whose life changed stations without warning or explanation or consultation, who carries on without a whole lot of interest in the proceedings and who, in the end, disconnects from the world so he can get on with living his span out.

It was poignant to me that Mackenzie left everything behind to be in the present which, for him, consisted of scraping off the detritus of his past. I liked Mackenzie, but I suspect lots of readers wouldn't and didn't. People who still have a lot to lose don't like people who don't, as a rule; the gulf is wide and the bridges few and far between. I liked that he read old books from the library to use his brain. But of course I would.

Early Morning Sightseer led me to ponder several things...I hated Tilney, and Barney was a bore; England really soaked into Author Ingalls ("pyjamas" and "moving house" from an Indiana boy? Never); and there are so many ways I felt Patricia Highsmith's fingers on this piece it was unnerving. None of those detracted from the essence of Ingalls's fiction: finely observed and beautifully crafted unhappiness in relationships. I loved several turns of phrase, though; it is, after all, a Rachel Ingalls piece.

There's an easter egg for the previous story, The Man Who Was Left Behind, in a minor character's name; it made me smile.

St. George and the Nightclub endings are as awkward and full of mistakes and fearful silences and babbling idiocies as beginnings are; the end of a marriage never, ever comes easy. Don cheated, some sleazeball told; Jeanie hurt, then hurt him; no one does it right all the time.

Forgiveness? What's that? A Rhodes nightclub evening with fools and lushes? No. Abandon hope. Just...breathe. And be damned grateful you still can.

Something to Write Home About details the final moments of self-delusion in John's two-year marriage to Amy, whose increasing mental illness is no longer avoidable and ignorable. Their Greek holiday just bashes his nose into the trouble Amy is in, makes him wretched then hopeful then numb; he breaks and stays broken, but fronts so Amy can't tell. Saddest of the sad stories.

All in all, a collection of mournful reflections on the nature and perils of intimacy; to my knowledge, Ingalls was not married nor romantically linked to any one person. I wonder if her father, an academic at Harvard, and mother the homemaker were unhappy. I read these without the great pleasure I read Mrs. Caliban with, but still with a huge sense of their honesty. Ingalls does not seem, in my current experience of her writing, to be able to write a dishonest or malformed sentence or use a superfluous or ill-chosen image. Whence came this deep and fearless knowledge of intimate unhappiness? I'm of the school that says only one who knows can tell with such limpidity. Wherever she came by it, Ingalls understood and empathized with the unhappy. She bounded that experience with walls of words, fences of imagery, and made a dry, hot, bitter art out of unhappiness.
Posted by Richard at 12:00 PM