WITH WALT WHITMAN, HIMSELF is a beautiful 200th birthday present to the Good Gray Poet. 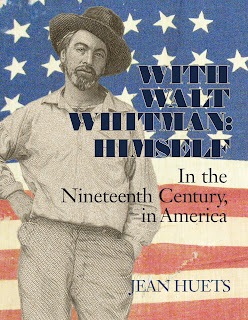 THIS IS A LIBRARYTHING EARLY REVIEWERS BOOK REVIEW

The Publisher Says: WITH WALT WHITMAN, HIMSELF immerses the reader in the life and times of the poet called “America’s bard,” with over 300 period images and text including extensive quotes by Walt Whitman and his family and friends (and a few enemies). Explore the fascinating roots of Whitman's great work Leaves of Grass: a family harrowed by alcoholism and mental illness; the bloody Civil War; burgeoning, brawling Manhattan and Brooklyn; literary allies and rivals; and his beloved America, racked by disunion even while racing westward. The coming year 2019 will mark the bicentennial of Walt Whitman’s birth; this book anticipates the celebration with a perspective of Walt Whitman “in the nineteenth century, in America,” as he himself put it.

My Review: What an extraordinarily lovely surprise this book was to me. It is physically beautiful: Printed in four colors, with Whitman's own words highlighted for the reader's eye by being printed in a handsome shade of Process Blue; daguerrotypes and other photos printed in rich and period-appropriate shades of umber and sepia achieved by using the four process colors; paintings and archival materials reproduced in very clear and obviously carefully proofed separations. The paper is uncoated, but is a top-quality book paper; this means it isn't vividly bleached to an eye-hurting whiteness, thus making the text a chore to read. Instead, the whole package, in its design and execution, is meant to be an inviting visual and tactile experience. This makes its contents that much more appealing to view.

This is a coffee-table book about a poet, not about poetry. It would look very well on anyone's conversation-starting furniture of whatever description. The purpose of the book is to bring a modern reader, perhaps one not familiar with Whitman or, at most, glancingly acquainted with "Crossing Brooklyn Ferry" or "To A Stranger" (if a gay man over 40), a sense of Whitman the man and the way he became that man. The 19th century brought huge changes to the USA, as your history class sledgehammered into your adolescent brain. The world Whitman was born into on the 31st of May in 1819—two hundred years ago today—resembled not at all the world in which he wrote his poems or in which he died, in March of 1892, at seventy-two well-lived years of age. Steamships, trains, escalators...a Civil War whose battles we fight to this day...a world that Whitman embraced with wide-open arms and eyes, with reservations he always set aside to be more fully present in his moment. We could all do well to live in imitation of Whitman's way.

If one approaches this volume in the spirit of an interested browser, it will delight and edify; those seeking A Life or, perish forbid!, a monograph on Whitman's poems, will go away dissatisfied, though certainly diverted. I came to the book informed about Whitman, and came away delighted at the quantity of insight I gained from reading it. I loved the images, I knew I'd be sucked in by the 300 or so lovely reproductions, but I was equally edified by the organization of the text into Walt, and his world. It is explicit in the title: You're going to 19th century America with Walt Whitman's life as your tour agenda. As I am a New York City boy, those sections resonated strongly with me; as a Long Islander, Whitman's experiences highlighted for me the unslackening pace of change in this vigorous and vibrant world. Whitman was born in Hempstead, where I spent a decade! Believe you me, if we resurrected Walt and placed him in the Hempstead of today, he'd love it for its vibrant urbanity and be shocked to learn it's his birthplace.

I found Pete Doyle's tale, with whose outlines I was familiar, to be unbearably poignant. Soul father Whitman, 45 at the time, met his 21-year-old life's love on the streetcar where the lad worked. The rest of Whitman's life, and of Doyle's I learned here, they were connected, they were in love. What that means to someone in an intergenerational relationship in this disapproving and minatory world...! The storms of life could separate their bodies, death could knock with her unignorable tattoo, they were in love:


I have Walt's raglan here...I now and then put it on, lay down, think I am in the old times. Then he is with me again. It's the only thing I kept amongst many old things. When I get it on and stretch out on the old sofa I am very well contented. It is like Aladdin's lamp. I do not ever for a minute lose the old man. He is always near by. When I am in trouble—in a crisis—I ask myself, "What would Walt have done under these circumstances?" and whatever I decide Walt would have done that I do.

I hope with all the fibers of my being that my Pete, my Young Gentleman Caller Rob, has occasion to remember as fondly after I am dead.

It was such points of commonality, uncommon to find in a work about a long-dead author, that kept me returning to the book with a curious mind and an eager eye. After reading WITH WALT WHITMAN, HIMSELF, I was soul-satisfied that I had found my spiritual ancestor. No poet I, nor truth to tell much of a poetry consumer; but Walt Whitman, comme d'habitude, pursued me down the street to talk to me.

I am so very glad that I stopped to listen.
Posted by Richard at 2:09 PM