THE SECRET OF THE STRATEMEYER SYNDICATE, a 32-year-old study of the *business* of the Nancy Drew publisher 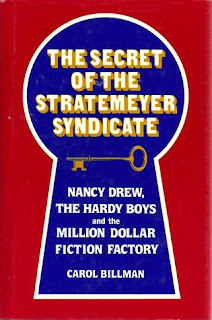 THE SECRET OF THE STRATEMEYER SYNDICATE: Nancy Drew, the Hardy Boys and the Million Dollar Fiction Factory
CAROL BILLMAN
Out of print
$Oooodles and Gobs

What The Publisher Says must remain a mystery, since I forgot to copy the flap copy and the Amazon description is pointlessly brief. It is also the source of, or copied from, I can't say which, all other online descriptions of the book.

My Review:This is Author Billman's only book publication that I can find. An academic paper of hers on the virtue and values instilled by McGuffey's Readers and Horatio Alger Jr's grit-and-character novels, published in a 1977 edition of the journal Popular Culture, appears to be the remainder of her internet-accessible output. I am led to believe that she had a career as an English professor at the University of Texas at San Antonio during the period in which she published the Alger paper. So the question of why she wrote a book on the business of the Stratemeyer Syndicate is answered: Her interest in children's literature and its purposes through the years was deep enough to make it a career.

It says something about that fact that I am a bit sad more didn't come out of it.

My pleasure in reading this odd, out-of-the-way volume was deep.


For young readers, it would seem, mystery fiction represents an especially clear case of what any reading of a story involves. The process of reading is still an uncertain enough proposition. Thus the series mystery—replete with characters who are unmistakably good or evil, easily recognized clues as to the crime's solution and to the way the story is told as well (for example, cliffhanging chapter endings), and a writing style that is both familiar and undemanding—offers extraordinary inducements for apprentice readers just coming to feel at home with the idea and act of reading a novel.

No wonder I still like mysteries. The experience of reading the Hardy Boys and Nancy Drew was designed to scratch that specific itchy place in me. It was my training ground for decoding stories. Simple words, obvious clues, and a strong linear plot gave me a track record of success in analyzing stories for their payoffs. Author Billman makes this memory fresh by going into the act of creating the novels I read. I re-experienced through the memories her book called up the sheer joy of reaching the solution to The Shore Road Mystery before Frank and Joe did. It was a story about stolen cars, and Mama figured that alone would get me going. How right she was!

The boys' slightly louche friend Dodd (first name escapes me) is being framed for car theft, along with his dad. The boys know he's innocent, so his dad must be too; Fenton Hardy, their dad, gets involved because this little drama is a side-show to one of his own, adult-therefore-important cases pursuing an interstate car-theft ring. The solution to both cases involves baiting a trap to get the thieves to lead the cops to the cars. It works, of course, and there's even some gunfire (no one's injured, naturally) to spice it up. I knew that the cars were hidden in the area before this coup de foudre struck the heroes. That was a wonderful feeling, as witness I can call it up more than a half-century later.

Author Billman's thesis, that this experience of mine was carefully designed and multiply repeated, isn't original to her. Bobbie Ann Mason's 1975 feminist work, The Girl Sleuth, gives voice to much the same idea when she says of the Syndicate's house style, "The series are so carefully styleless that you can't point to bad puns, strained metaphors, overloaded descriptions. There is an absence of language: there is vocabulary, but not language." It takes care and attention to detail to make that accurate assessment of Syndicate novels work over many hundreds of books. The Syndicate's business purpose, to make and sell as much storytelling as they could, followed a tried-and-true path of building brand loyalty:


First, Happy Hollisters readers move on to the Hardy Boys and/or Nancy Drew...readers do not simply abandon those books they once regarded so highly...They also carry over the confidence gained from stories about successful young discoverers and a literary template--a sense of how stories are constructed and proceed--that will be helpful later. Schooled in the elementary virtues of fiction and having fully discovered all the secrets of the series mysteries for themselves, they are ready, in both senses of the word, to explore what is beyond.

For many, many of us readers, this ladder of consumption was a step-ladder to a lifelong joy in reading. Millions and millions of delighted young story addicts spent billions of hours ignoring chores and avoiding busybody siblings by shoving out faces in a book. The Syndicate's profit motive, set by Stratemeyer all the way back to when he was ghosting the last few Alger books that had been outlined before the man died, was to create and then satisfy demand for stories.

Stratemeyer's idea wasn't, however, the first sally onto that field. Billman explains his own experiences as a juvenile-fiction writer were in service of the established leaders in the field like Grosset & Dunlap (now a Penguin Random House subsidiary and still in business!) with the Rover Boys stories. Thirty titles strong, this series began in 1899 and ended in 1926. It was Arthur M. Winfield's pseudonym that launched Stratemeyer's original idea: Hire the writers to work to his detailed plan for the particular story in a simple, pared-down style. While Stratemeyer wrote all the Rover Boys titles, he simply couldn't write all the books that a successful book packager would need to keep the demand for juvenile books (what today we call YA) met. Dozens of series were begun, many survived, but a few thrived.

The Hardy Boys series began in 1927 with The Tower Treasure, written by Stratemeyer himself. There followed a flood of titles, rewrites, and spin-offs in other media. The series was substantially rewritten beginning in 1959 to modernize its language, concerns, and attitudes; the world had changed a lot in the intervening 32 years. Another 20 years passed before further modifications became urgent; the series itself was rebooted in 2005 without the original titles and plots so RIP The Hardy Boys 1927-2005. Seventy-eight years!

Nancy Drew's adventures began in 1930 with The Secret of the Old Clock, again penned by old man Stratemeyer himself. As he died that year, he was unable to continue the series...his daughter Harriet Adams was the principal of the firm until it was finally sold in 1984. Nancy Drew was the unequivocal monster success of the Syndicate: Over 200 titles across several series! Aside from the obviously necessary tartings-up any book series over 80 years old (1930-2013) will need. The character survives to this day, though in unrecognizable form if one goes back to the ur-text of 1930.

Billman also details the Ruth Fielding series and the lessons it had for the syndicate. It lasted from 1913 to 1934 for a total of thirty books. Like the earlier Rover Boys series, the characters in this series aged at something like ordinary speed. By book 30, Ruth was married and had a child. That was the kiss of death for a series aimed at juveniles, like the main characters finally hooking up is for TV shows (eg, Moonlighting). It was a lesson that the Syndicate learned well:


In short, the Hardys remain locked in that period between childhood and adult life that psychologist Erik Erikson has characterized as a moratorium—the quiet and deep sleep of fairy tale characters that precedes awakening into maturity.

So Frank and Joe are eternally 18 and 16, up from the 1927 ages of 16 and 14; Nancy Drew is 18, having started at 16. And their audience, per much publisher research, got younger by two years with each reader generation. Now the audience is tweens, through 12 years old; in my day, I lost interest in the books at about 11 or 12. It's my observation that the need to puzzle out mysteries gets more urgent as the decades pass, so it's natural that the audience for lessons on the subject gets younger as well.

Ruth Fielding's thirty-book run sounds amazing to mere mortals; Nancy Drew, whose character is in the same moratorium Author Billman identifies, blows that record apart. The other part of the Syndicate's genius was in focusing its output on mysteries. Most of us like to solve puzzles, on some level. There's enormous satisfaction in the effort being rewarded for adults; for children, the pleasure is sharper and more immediate:


Psychoanalyst Lili Peller has commented that stories about uncovering secrets are naturals for children, for whom life is full of secrets adults are guarding. More specifically, {another author of psychological studies on the Hardy Boys} has suggested a Freudian fascination in the Hardy Boys series with yawning-mouthed caves.

Lots and lots of caves and tunnels in them Hardy Boys books...yep...but anyway, the point is well-made that kids need puzzle-solving as well as problem-solving skills and the Syndicate's output was tailor-made to satisfy both needs. Author Billman, writing in the early 1980s, saw the evidence of this successful meeting of a need leading to commercial success at flood tide. After the Syndicate was sold to Simon and Schuster in 1984, the books kept coming. The series, of course, were ruthlessly trimmed to the Hardy Boys and Nancy Drew; this makes sense as the nature of mysteries is to be addictive.

Ask any Salvo Montalbano or Meg Langslow addict.
Posted by Richard at 1:27 PM