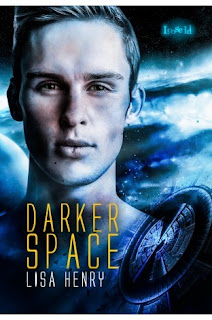 The Publisher Says: Brady Garrett is back on Earth. He’s living with his partner Cam and they’re raising his sister Lucy together. Life is better than some feral reffo from Kopa has any right to hope, and Brady knows it. He’s even grateful for it, most of the time. He loves Cam, even though he’s afraid that he’s not good enough for him, and he’s still having nightmares about the alien Faceless.

Cameron Rushton loved being a pilot once, and he still feels the pull of the starlight. He’s building a life with Brady now, and with Lucy. Life is good, even if it’s not without its complications. Both Brady and Cam are dealing with the endless cycle of interviews, tests, and questions that the military hierarchy hopes will reveal the secrets of the aliens who could very easily destroy humanity. They have each other though, and together they’re making it work.

But from out in the black, Kai-Ren is still watching and everything Brady and Cam think they’ve won, they stand to lose all over again.

My Review: Pretty much all four stars are for the last 50% of the book. It isn't necessary to grind us into Brady's deeply boring late-adolescent angst for an entire half of the book. At least Brady and Cam are hilarious together. Cam's so patient with Brady's annoying-as-fuck oppositional disorder! What he has to put up with...


“Crewman Garrett,” Stockade Sam said when the MPs dumped me in his custody again. “Your usual room?”

It's hilarious, spot-on, and deeply telling. But I guess when a man has kept you alive by sharing his literal heartbeat with you, allowances get made.

The story's heartbeat, you should forgive the wordplay, is the love shared by Brady the fuck-up and Cam the saintly patient grown-up. He's there, steady and solid and accepting, as Brady acts out again and again and again. As Brady's the one telling us the story again, it's not all that surprising that he's giving us his own slant on the action...but what a jerky kid he is. I know we're all jerky when young, but good lord Author Henry please give us surcease from Brady's solipsism in the next book!

Cam, because of their indelible link established when he needed saving in the first book, knows Brady's past as intimately as if it was his own. He seems to be able to make that work in their love's favor, where Brady is not quite so self-aware or so well-adjusted or something. He knows as intimately as Cam does what was done to the returned...prisoner? captive? plaything?...that Kai-Ren the Faceless battle-regent, um, modified shall we say in his own image.

Don't try to tell me that won't come back to bite him in the ass. (And yes, the antecedent is vague there, by design I assure you.)

So we get a chance to see what life is like for the new family, which now includes the resilient and plucky Lucy. Cam, in his saintly way, makes no objection to Lucy entering his new pair-bond with Brady. I can't help wondering if it had been Cam's sister, how Brady the bratty would've reacted.... Anyway, the couple is tentatively thriving, the world is still spinning, and then *BAM*

Kai-Ren and the Faceless are back.

Suddenly the mentally linked men in Humanity's midst are a Threat to Security. Suddenly the hands-off approach the authorities took to the people wearing the identities of Returnee and Mate is revoked and the fact that they share a mental bond that also includes Kai-Ren and the Faceless is too much risk of exposure to ignore. Let's not forget that this is an Earth whole population was literally decimated by the Faceless not so very long ago. Their caution, well...I'll never really get it, this Security State mindset, but I recognize its reality. What exactly can be done against the Faceless is what is never clear. Their weapons are simply too far advanced for Humanity to defend itself against, so what sense does it make to try?

Well, anyway, there we are and there Brady and Cam are in prison and there Lucy is with Cam's also-saintly parents and the story becomes a seriously exciting ride. I was breathless as Kai-Ren came back back to Earth to invite, for want of a better term, Brady and Cam to see his culture. It is just about lethally frustrating that we don't get to go there as soon as the ship arrives. Kai-Ren's essential alienness is a thing we're allowed to hope, by the end of this story, will be a bridgeable gap. Brady is scared to go back into space, as who wouldn't be when only bad things have happened to him there. Cam is...ambivalent, but honorable, and desperate to stop the extermination of his species. The military men who clutter up this installment in the series include Cam's first love, Chris Varro. Who, for a wonder, Brady falls in love with via his shared memory with Cam...until Chris (unsurprisingly) simply doesn't see Brady.

Ouch! Your beloved doesn't even see you! But wait...how can he...he doesn't know you from a hole in the ground. He was in love with your lover, they were first-loves, not you.

So of course, this being a Lisa Henry novel, Varro is on Kai-Ren's vessel with Brady and Cam. And Lucy, who simply will not be left. Not that Brady wants to leave her; nor does he want to take her into the unknown, the blackness of space; but he can't, in the end, feel like he's depriving her of Family (a thing he treasures as only one who's never had it can) potentially forever. Along for the ride comes Doc, whose caretaking of Brady while he was a raggedy conscript on Defender Three no doubt saved his life and most certainly enabled him to save and enter Cam's life.

The gang's all here. How long until Darkest Space comes out?!?
Posted by Richard at 6:15 AM