VINTAGE 1954, a time-travel jeu d'esprit with heart and mischief for all 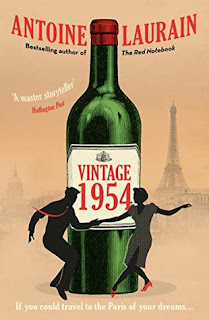 The Publisher Says: When Hubert Larnaudie invites some fellow residents of his Parisian apartment building to drink an exceptional bottle of 1954 Bordeaux, he has no idea of its special properties.

The following morning, Hubert finds himself waking up in 1950s Paris, as do antique restorer Magalie, mixologist Julien, and Airbnb tenant Bob from Milwaukee, who's on his first trip to Europe.

After their initial shock, the city of Edith Piaf and An American in Paris begins to work its charm on them. The four delight in getting to know the French capital during this iconic period, whilst also playing with the possibilities that time travel allows.

But, ultimately, they need to work out how to get back to 2017. And the key lies in a legendary story and the vineyards of the Chateau St Antoine...

THE PUBLISHER PROVIDED ME WITH A DRC VIA EDELWEISS+. THANK YOU.

My Review: There's a lot to be said, in this Giddy Season, for retreating to your phone and reading something unchallenging, fun, and still...outside the norm, able to show you something you wouldn't expect to get while being fluffed. This story, by a born-and-bred Parisian (it's like being a multigeneration Manhattanite is in the US), is a time-travel fantasy about les jadis. First we must have The Couple. They are Julien, grandson of a man who saw a flying saucer...twice!...and Magalie, a Goth chick. Both are born and raised in Paris, though not of Old Families. They're perfect for each other. They just don't know it yet. They live in little apartments at 18, Rue Edgar-Charillier; Magalie has a studio on the ground floor where she plies her trade as an antiques restorer. Julien is a mixologist at Harry's New York bar, a legendary watering hole and now tourist spot. They're the modern young Parisians, not beholden to bureaucracy or Big Business, but nimble gig-economy hustlers.

Then we have Tradition. He (of course) is duty, honor, and boredom personified in Hubert Larnaudie. He is also a bombastic old Gaul:


‘Because of my position as chairman of the management committee, and my family history, it falls to me to defend … our patrimony!’ he concluded emphatically.

Hubert, dreary sort that he is, owns an apartment in a building once his own family's. But that means he has a LOT of stuff in his various storage spaces. This will become important. He is a bureaucrat, mais naturellement, a property management managerial drone; he also sits on the apartment house's board. But of course.

Then, to balance our wheel, we must have The Stranger. Bob from Milwaukee is, well, a very Euro vision of the Good-Hearted American:

He's in Paris without his deeply beloved wife, Goldie, whose coma is irreversible and who, countless people tell him, would insist he use the tickets to Paris that they'd intended to use for their anniversary. Alone in Paris, desperately sad, Bob's Airbnb apartment is in the building...and thus are our time travelers assembled.

What happens is the dream of a UFOlogist's dream. Julien's grandfather's fame resulting from his 1954 UFO encounter in a Saint-Antoine vineyard is family lore; but Larnaudie happens to have a bottle of it in his cellar (from which he has only that day needed rescuing by the American and his two fellow tenants). The four share the bottle, totter off to their separate couches...and awake in the same building, only somehow in 1954! They leave the 21st century as they step outside.

Audrey Hepburn. Harry's New York Bar, with Harry MacElhone in it. Robert Doisneau. Les Halles intact, just as Napoleon III saw them last. Piaf and Gabin having dinner together!! What a bloody glorious bottle of wine! Of course the time travelers are utterly bumfuzzled, broke, and homeless. This problem is resolved by Bob the American changing his American money, famously unchanged in looks for generations, into the old francs in use in 1954. (Never mind the big-head portraits on the bills we've got now! Go with it.) And Hubert knows the apartment across from his grand-père, now his own, is empty because family lore says the cousin it belonged to was in Chile...for twenty-five years! All Hubert needs to do is get the key from the concierge by pretending to be the cousin. Shelter = solved.

Only the concierge remembers the cousin...she proves to be elozable, though, so some francs later the four get to lay their weary heads down. And from there...the problem of how to get back to 2017 (why would they want to, I wonder) looms large until Julien recalls a fictional 1950s absent-minded professor called Charles Arpajon, whose 1955 (not a typo) book on UFOs as time-travel machines not space-travel ones he has read. The Scooby-group hotfoots their way to the train for the Saint-Antoine vineyard where the UFO sighting is about to take place....

I don't need to tell you the rest, you know we're all going to be okay in the end. The suspense here is minimal at best. What the point of this read is: Comfort. Four 2017 people Forrest-Gump their way through 1954 Paris, then the lost agrarian joys of the pays et temps perdu. It is a gentle and delightful caper through time, if not space. The author, whose previous whimsical works I would now like to read, is very Britishly translated into vernacular British..."sellotape" says it all...with four foul, reeking w-bombs to ruin my read. Why on this wide green Earth are there still people using "to w-i-n-k" as though it meant something clever? It's creepy.

But aside from that cavil, my thoughts on this book's appeal center on its ability to lull your anxiety centers and soothe your story cravings while delivering resolutions to all problems for all the people we've invested our three hours in. Really welcome in the Silly Season of family gatherings, work parties, and suchlike exhaustions. Load the Kindlebook onto your phone for $9.50, read it in bits and snatches...you'll recall everything because it's all right there.

Satisfying, savorable civet for your ease and delectation.
Posted by Richard at 6:30 AM