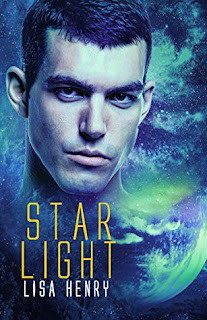 The Publisher Says: Brady Garrett is back in space, this time as an unwilling member of a team of humans seeking to study the alien Faceless and their technology. It’s not the first time Brady’s life has been in the hands of the Faceless leader Kai-Ren, and if there’s one thing Brady hates it’s being reminded exactly how powerless he is. Although dealing with the enigmatic Faceless might actually be easier than trying to figure out where he stands with the other humans on board, particularly when one of them is his boyfriend’s ex.

Cameron Rushton loved the starlight once, but being back on board the Faceless ship forces him to confront the memories of the time he was captured by Kai-Ren, and exactly how much of what was done to him that he can no longer rationalize away. Cam is used to being Brady’s rock, but this time it might be him who needs Brady’s support.

This time Brady is surrounded by the people he loves most in the universe, but that only means their lives are in danger too. And when Kai-Ren’s fascination with humanity threatens the foundations of Faceless society, Brady and Cam and the rest of the team find themselves thrust into a battle that humans have very little hope of winning, let alone surviving.

My Review: It's time for the ride to end, it seems. The third and possibly final outing in the Dark Space series dropped on 1 December, and I was up all night devouring it. Author Henry, all is forgiven for the FOUR-YEAR WAIT you subjected us to.

The ride to Kai-Ren's homeworld, or so the men and the audience assume, is on the Faceless battle-regent's (heh; the joke makes sense after this book, promise)...vessel...that has an atmosphere shareable by humans if not particularly pleasant to them. It's also downright inimical to their tech. (A thing I'd think Cam, accustomed to the vessel as he must be, might've mentioned was a possibility, but we're never told such happened.) Luckily, Cam's ex and Brady's object of derisive jealousy Chris Varro thought ahead and brought pencil and paper notebooks! (Although how the paper stays inscribable is somewhat beyond my ready comprehension.) And he's prowling Kai-Ren's...vessel...making copious notes and poking around wherever he can find to go. All unmolested by the Faceless.

In fact, they appear to have no particular interest in the human passengers, not troubling themselves to provide food and water and sanitary arrangements. Of course, the men (and Lucy) brought some food and Doc and Brady brought cigarettes (ickptui and why hasn't the devastated Earth stopped growing the noxious resource-hogging tobacco plant?!), but no one knew how much they'd need. They're in the, um, third month? how does one accurately measure time in an alien environment? of a voyage without a set duration. Where they're going is unknown, how long it will take is unknown, how the...vessel...propels itself is unknown...lots to learn by Humanity, and Chris is the only one we actually see doing the work of figuring it out.

No wonder Brady hates him. He's like Cam: The omnicompetent hero-guy, only this one doesn't care about Brady so he must be a jerk. And why was it again that Cam left him, or he left Cam, or however that was?


And if it was weird for me to be sharing a room with my boyfriend’s ex, how fucking weird was it for him to see us together? At least he didn’t try to pull rank on me anymore, and I didn’t try to stab him in the throat with a screwdriver. We were a work in progress, Chris and me.

These thoughts are part of Brady's ruminating (in the psych-problem sense) about how much he's a waste of space on this trip while simultaneously, and redemptively in my eyes, worrying about the bright spark that is Lucy. Is she developing properly in this weird environment? Is her bright, inquisitive nature going to make her into a Cam instead of her rage-inducing reffo (refugee to us 21st-century Murrikinz) background making her into a Brady? It is a sign of Brady's growth as a person that he's worried about Lucy's personhood on this voyage into the utterly unknown:


Here, Lucy was with me. I was looking after her, just like our dad had wanted. I had Cam as well, and he was more than I’d ever dared to hope for. Cam saw better things in me than I ever saw in myself.

Knowing that someone else sees you differently from the way you see yourself, for better or worse, is a sign of increasing self-awareness and hope, and not a second too soon in Brady's case. His ragey adolescent acting out is touched on in this book but not seen in action. Thank goodness. I was way over that after Darker Space, I must say.

So the routine, set largely by the Doc and his analog clock, abetted by Chris-the-eternal-officer, ticks along until after about three months of relatively unchanging conditions Something Happens. Kai-Ren's...vessel...has finally revealed its true nature to the men's combined observational powers. It is a spoiler to mention it, so I won't, but suffice it to say that the entire purpose of this trip has been to take the humans with the Faceless to a place in the galaxy where the Faceless can begin a new generation. Kai-Ren's position in the inscrutable hierarchy of the Faceless is bolstered and enhanced by the presence of the humans and he shows them off to the lower-ranking Faceless in some humiliating ways. The humans aren't in any position to fight against this, or back after things happen; the Faceless are simply not killable in any ordinary way.

Extraordinary ways have a way of happening quite extraordinarily often in fiction, have you noticed?

As we're entirely in Brady's head during this trilogy of books, we don't see anything from Kai-Ren's PoV and we don't get any non-Brady-level views of Faceless society. But the events that form the climax of the book are all Brady all the time, from the shocking and unexpected moment that disaster strikes, to the intense and exciting ways that disaster gets amplified, and thence to the cause and the resolution meeting in a scene that left me slightly weakened from clenching and sweating. Faceless society has been dealt a major surprise, and Kai-Ren is the vector of and the victim of it. Humanity's role? Casualties, of course, because whether elephants fight or fuck, the grass suffers. Not entirely powerless at last, possessed of a secret weapon that absolutely no one could've predicted would exist, Brady (especially), Chris, and Cam all unite in purpose to get themselves to safety...possibly at long last not illusory!

Thus does Author Henry leave us after around six hundred pages of Brady and Cam's life together. It's barely the beginning of the journey, that much we're sure of:


And after that he kissed me, and told me that he loved me, and the universe shrunk to just the two of us.
***
I would never understand where Cam found his faith, not if we were together for an eternity.
***
...Cam’s freaky prescience...I think that was all him. Or I was as easy to read as book. The sort with pictures that popped up.

Brady's learning how to conceptualize a future that has Cam in it. He's even admitted out loud that he needs to get psychological help when they get home. He's growing up at last, and he's lucky enough to have someone to grow with who is willing and able to grow along side him.

The surprises in this book are too spoilery to go into. But I very, very much want you to know that they make the future for Humanity a lot more interesting, and I hope very strongly we get more views of that world.

He hinted broadly.
Posted by Richard at 6:30 AM