MORE FREE SF! Two stories from 1957 to read in line, while waiting for the gift wrap or at the P.O. 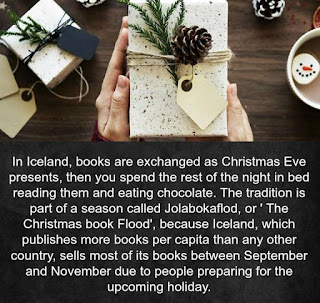 SF blogger Joachim Boaz decided to do a project where he will review a sampling of the Golden-into-Silver Age short fictions about generation ships. The first review, and story, I read was Spacebred Generations by Clifford D. Simak. Then I read his Judith Merril review; he was pretty stoked while I, welllll, maybe not quote so much. But the reads as a whole I'd call a success, so why not follow along?

I went back to the first one, then got ahead again...comme d'habitude.

What better time is there to give yourself a booster shot of resistance to Faux Smarmy Cheer? Here it is, readers, a tale of how irredeemable Humanity is! A good part of my mingy rating, and for an author whose work I have always liked before!, comes down to this:


As a matter of fact, Bob was the closest thing to a friend he had ever had. There had been a few girls, but that was different.

It's hard for me to choose which thing to object to the most here: Bob's relegation to not-friendship despite clearly behaving as a friend, or the appalling-to-me notion that "girls" can't be a male's friends. The assumption that men are either studs or cucks (though I don't think Professor Oliver, deceased 1993, would've used those terms, I know he'd "get" them right away), and that studs are always tall and strong and a little bit ugly, is reductive and objectionable in today's landscape. It's also wrong, both factually and conceptually.

From there, the logical lapses just built and built...why would the designers of a closed system allow books that contained Earthly images like ships, seas, clouds in reach of people for whom those words mean nothing? if the movie the people saw on Founding Day has images of Earth, how would the first-time viewers know what they were looking at? Sam comes across space suits, things he's never seen before, and just knows what they are HOW?!...but all that pales into insignificance held against The Big Reveal.

I assume you're curious enough to read the darn thing yourself but I'll say this much: Oliver's low opinion of Humanity didn't start late in life. He was only thirty-ish when this tale, and the more famous Transfusion of 1959, appeared. Even famously cynical SF writer and fellow Austinite Howard Waldrop got nothin' on the bitterness of this tale, or the cynical outrage at the pusillanimity of our species. I might not be thrilled by the read, but I am in sympathy with it, being as bleakly unimpressed by the inner workings of Humankind as Oliver was before me. 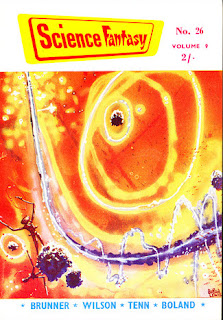 This is a Brunner story I haven't read before! He's an old favorite of mine (see my review of Times Without Number, others came before I was reviewing). So when Joachim Boaz posted the link to this story, well, I don't have much impulse control when it comes to reading....

Like Judith Merril's story reviewed below, this one takes place as things are reaching a crisis or inflection point; in Brunner's case, opposite to Merril's, the point-of-view was adult...well, aged Earthborn people, the ones who started the trip to a new world that was planned by a visionary called Yoseida, so obviously a Japanese person. This sort of surprised me. Japan was on the come-up in 1957, but it wasn't the economic and technological powerhouse it would become. But Yoseida was the money-man as well as the macher behind this effort to colonize a new world. Prescient, or very lucky? I suspect Brunner himself wouldn't know now.

Franz Yerring is the head of the ecological section of the generation ship. He's Earth-born, aging out of his position, hoping that he won't have to deliver bad news to Captain Magda Gomez about their steep decline in food and air availability looming within a month. Wish granted, Franz, the ship will now be in orbit over Trip's End around Tau Ceti in about two weeks!

Then the fecal matter impacts the rotary ventilation enhancement device in quantities previously undreamed of.

The shipborn aren't much interested in getting off the ship.

You see, this development would (in less devious hands) set the rest of the story onto the rails of conflict and strife...like Clifford D. Simak's Spaceborn Generations, reviewed in November...but no, our lad John takes that expectation and shakes it hard, until its wallet falls out and disgorges the serious gelt. There is no conflict between the spaceborn and their elders. They aren't interested enough in the Earthborns's issue, planting a colony, for it to matter enough to cause a fight.

Read the story, the real conflict is much, much higher stakes than passive resistance to The Plan. A lot scarier, too. But the problem is that the ending relies on science that seemed more plausible in 1957 than it's proven to be in modern times. The issue it raises is bleeding-edge current, and the problem it posits is also bleeding-edge current. It's a wonderful way to bring up a painful discussion in sociopolitcally polarized families. But the central premise is debatable in its form presented.

I'm getting dangerously close to irretrievable spoilers here. Let me say this to you, dear readers: The story is free at the link provided and it will richly reward the 30min you spend reading it with hours of rumination.
Posted by Richard at 6:30 AM