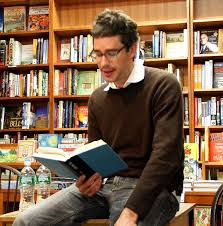 Read it here free. You get four free reads a month from The New Yorker; this one is worth burning one of them.

See this? The Old Flame isn't worth the stress:


Then my old flame graduated early and was gone. There were rumors of a new boyfriend and a life in Ireland. I didn’t miss her. By then, I was in this terrible on-off thing with Sisyphus, who kept dragging me up a pretty blond hill and hurtling me down.

Because there's always another Old Flame. Author Ferris, winner of the 2008 PEN/Hemingway Award for Then We Came to the End, clearly has thought the modern condition through; he writes the voice of the Millennials faultlessly, musically, and honestly. The obsession of a young man is not (solely) sex, it's the being-ness of his sex partners, the odd and quirky and endlessly shifting kaleidoscope of characteristics and qualities that occur and recur in his solipsism's background. He maintains through it all a sense that The Other is just ever so slightly unreal, is reducible to A Title. Like most all the young men I've ever known, from every generation I've ever met.

It's wonderful to read the thoughts I've had all my life, the wonder and the bewilderment and the anxious unreality of existence, come from another brain. It's incredible to me that anyone can read a short story of this economy and precision and not instantly fall in love with the form. 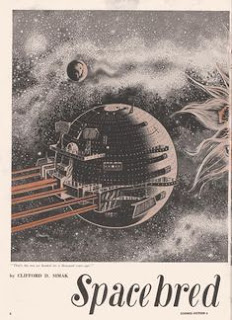 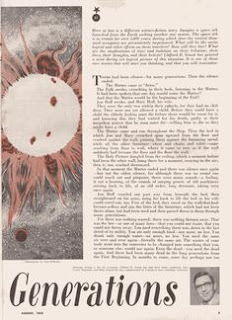 from the August 1953 edition of Science Fiction-Plus magazine

Not for nothing was Simak a journalist/popularizer of science. This generation-ship tale is short, so doesn't go into a lot of details about *how* a thousand-year voyage through space would be accomplished without human maintenance of its workings, and how it came to be that twentieth-century English was the lingua franca of the Ship, and whether the Ship's breeding program took account of skin color variations, and why The Little Woman was still in her place...the list goes on.

But what I see in Simak's story is the basic story I read SF for. It is about the tiny little prisons Humankind builds and calls Paradise. It is about the unquestioning and overly trusting way we accept what is given and hunger only for more, not radically and materially different. Novelty is more important than innovation...gossip more important than erudition. Wake up, Author Simak shouted at the Folk of 1953 who read this story, Life is short so wake up!

His fix-up novel, City, was in much the same vein. The Earth is subject to disasters and cataclysms, but savvy Humankind was somehow or other ready for that and hijinks ensued. As I think we can imagine, since Simak lived through the Cold War (died only three years before it ended, if we take 1991's collapse of the Soviet Union as The End), that was more a triumph of hope over experience. But his fiction, never precisely deft in execution, was always aimed at making a point about doing your own best, convincing others to do theirs, making the best of the stuff you had to hand. Teddy Roosevelt's formulation would've appealed to Simak, I think: "Do what you can, with what you have, where you are."

And that's all the Folk on the Ship in this story have done. It isn't a perfect world, at least not to us looking in at it, but they're still alive, and Humanity can always chug along somehow. But Mr. Simak, what I wouldn't give to ramp your ideas about women above the helpmeet/homemaker/uterus bearer. Mary Hoff, who is Mrs. Hero and no more than that, sees a whole new world spread before her barely comprehending eyes and her first thought is, "can we have a baby now?" She's *asking*permission*from*her*husband* to have a baby on a wide-open new planet. That's just...ICK is nowhere near strong enough a response.

Feminists are duly warned: Probably not enough substance here, in storytelling terms, to outweigh the deep, dark, dank cave of regression Simak lived in. I'm not resentful that I read the piece. I won't go out of my way to urge you to. But Simak's view of Humanity seems to accord with mine: Pretty damned lazy, really happy to remain stupid, and full of hate and spite, but love 'em or leave 'em.

Does the Shipping News cover off-planet departures?
Posted by Richard at 4:44 PM