THE LINES, a family's devastation in malaise-era US by a master of voices 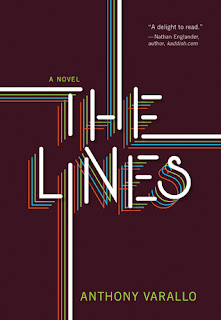 The Publisher Says: Set in the summer of 1979, when America was running out of gas, The Lines tells the story of a family of four—the mother, the father, the girl, and the boy—in the first months of a marital separation. Through alternating perspectives, we follow the family as they explore new territory, new living arrangements, and new complications. The mother returns to school. The father moves into an apartment. The girl squares off with her mother, while the boy struggles to make sense of the world. The Lines explores the way we are all tied to one another, and how all experience offers the possibility of love and connection as much as loss and change.

I RECEIVED A REVIEW COPY FROM THE PUBLISHER AT MY REQUEST. THANK YOU.

My Review: I was a teenager during the 1970s, already a survivor of a "broken family," though I suspect my own family was less broken than unformed...rather like the asteroid belt, widely dispersed bodies intersecting with silent violence when they bother to interact at all. Hence my interest in Author Varallo's first novel (after several story collections, including 2005's kid-themed This Day In History which I read in the Aughties and LOVED).


What strikes me first is how subtle Varallo is in making his points. "The mother," "the father" (much less in evidence beginning to end...I suppose that was inevitable), "the girl," "the boy," are all people with names though not in relation to each other. I have sisters...my sister is the mental name of each, after all I know who I'm thinking/talking about...and thus the message is sent. Author Varallo is narrating the novel from the inside, like any omniscient third person narrator...oh wait, he's not using omniscience...hm...so we're limited in our viewpoint but intimate with the thoughts and the only people who have names are outsiders and so the narrator is The Family?

Did I parse that correctly?

And, most importantly, does it matter...after all, I wasn't wondering about or even aware of needing to wonder about that until I started writing this review. I like it when I'm aware of a writer's writerly craft in hindsight. It is all too often the case in what I am told we should call "literary fiction" (isn't all fiction of necessity literary? even the televised, broadcast, projected kind? or am I too "big-tent" in my application of its definition?) that the overriding impression I, and many other readers, take away is, "how very hard it must have been to perform that feat." I love the hell out of Ducks, Newburyport and rated it almost five stars, but it's a very literary book, one that's got a huge amount of craft in its composition and good goddesses how much sweat and graft in the editing, and it shows.

I'm not against working for my pleasure; I'm against not including more work of the pleasurable reading sort in the category "literary." This novel is a pleasure read; it was a pleasure to read; the story was deeply relatable; and it didn't push its complexities of construction and creation at the reader. That's a good enough reason to read it right there, assuming broken-family fiction is one's thing. Sales figures suggest that it's a lot of peoples' jam...so come get you some.

I was deeply saddened by the father's ineffectual solipsism. He wasn't able to reach out from his gravity well of depression to connect with anyone, certainly not the mother in her angular, cutting unkindness. The girl, a highly competent person in the mother's mold, wasn't particularly ready for her role as leader to fall on her so soon; the boy, well, what a mass of inabilities he was, and isn't that depressingly familiar. Marcus, the bullying stepbrother brought into the family by the mother's decision to be Cliff's woman, is my worst nightmare of a human being. He decides to "teach" the boy how to be a man. It goes, unsurprisingly, horribly wrong and ends up as a major adolescent pissing match. As the nightmare of the blending family unfolds, there is a moment on pages 206–206 where the mother crystallizes the problems she's faced all her life in one paragraph:


And what is the mother to make of this scene, her son and Marcus locked into some kind of adolescent combat, while her husband's old coin bank, that banal and detestable thing, inexplicably smolders on a grill that had, as far as she can recall, only held burgers and hot dogs? Smoke, thick and unnatural, rises from the grill's lid. The air feels heavy with lighter fluid. If ruin has a scent, this back yard reeks of it. See the smoke drifting into the neighbor's yard, as real and substantial as the boy's tears, which he wipes now, his breath heaving in his chest. This family has seen enough tears to last them for a good long while, but each day seems to show up with a fresh supply, unaware of surplus. Human misery, there's never a shortage of it. Surely the neighbors will detect its odor, if they haven't already gotten too heavy a whiff this summer. This house where so much has gone up in smoke.

The mother puts her hand on the boy's shoulder, says, "Where's your sister?"

Uplifting it isn't, but rewarding it is. The world as seen through eyes much like my own. A pleasure not to be dismissed or belittled, that.
Posted by Richard at 6:30 AM