It's #Booksgiving again! A combination of Black Friday and Cyber Monday and Advent and Jolabokaflod!

As 2019 wanes, taking with it another in an apparently unending annual flotilla of boatloads of misery, trouble, strife, and negativity, let's focus on something much more fun: #Booksgiving! Between Black Friday and Christmas Eve, I'm here to suggest some literary delights whose (not always) joyful tidings will make the Night Before Christmas a bit less frenetic: Give everyone in your gift-giving circle a special book to read right then and there, in the midst of life, all together. 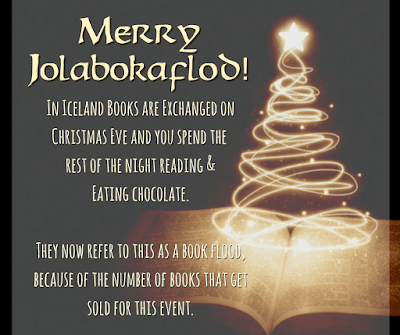 I promise that it only feels that way.

Iceland also has an annual book catalog, according to a 2018 Books from Scotland article, which explains the idea as follows:


Every year since [the end of World War Two], the Icelandic book trade has published a printed catalogue – called Bókatíðindi (‘Book Bulletin’, in English) – that is sent to every household in the country in mid-November during the Reykjavik Book Fair. People use the catalogue to order books to give friends and family for Christmas.

During the festive season, gifts are opened on 24 December and, by tradition, everyone reads the books they have been given straight away, often while drinking hot chocolate or alcohol-free Christmas ale called jólabland.

I got nothin' on the (appropriately named, IMO) non-alcoholic ale. I mean, why bother? But hey, that's just me.

But is the US actually so different? Most books in our market are published around gift-giving holidays, too. Look up any statistical source you can think of and you'll see the jaw-dropping surge in sales in each and every segment around Yuletide. Black Friday got its name from more than the salesdroids' moody misery on the horrible, horrible day; it's the day that almost all retailers stem their losses and go into black balance-sheet ink. And at least one organization in the US is is setting out to move the Book Flood tradition Stateside. 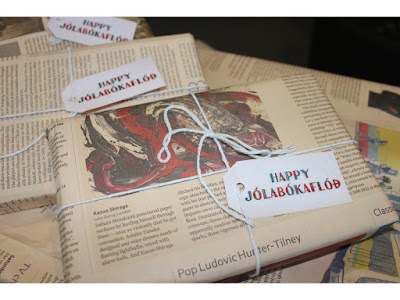 And it's not like there are no initiatives to encourage the bookish to share their addiction in the Holiday season. Take Dolly Parton's Imagination Library, which is described in this here piece. An initiative that Dolly, fourth child of twelve, began to give children in the US, the UK, Ireland, Canada, and Australia one book of their very own each month. It's curated carefully to be age appropriate, and it's an admirable extension of a program she began in 1995 for kids in her home patch of Eastern Tennessee. I suggest that you all put some money into this, or any other, outreach for underserved children to get books. After all, the Jesuits' founder, St. Ignatius Loyola, famously said, "Give me the child for the first seven years and I will give you the man." Knew his onions, did that old guy. He stole from the best, seeing as Aristotle said it first. You can tell because there's neither hide nor hair of "woman" in there, nor any sign that either of those old white men even sensed their absence. I'd recast it as "...I will give you the adult," but purists would be as vocal as feminists in their scorn. One cannot win.

Let's celebrate the process, shall we? Let's have Booksgiving! Starting on *shudder* Black Friday, let's think about what books we'll flood the tree skirt with on Book Flood Eve. I'll give you some ideas from my 2019 and earlier reading to include in your purchases. Simply click on the tag #Booksgiving" below and the entire list from all years will magically appear...in chronological order, never fear.

Happy Booksgiving!
Posted by Richard at 6:30 AM