THE NAKED BLOGGER OF CAIRO, necessary cruelty to my friends who need to wake up before it's too late 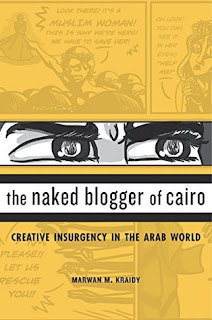 The Publisher Says: Uprisings spread like wildfire across the Arab world from 2010 to 2012, fueled by a desire for popular sovereignty. In Tunisia, Egypt, Syria, and elsewhere, protesters flooded the streets and the media, voicing dissent through slogans, graffiti, puppetry, videos, and satire that called for the overthrow of dictators and the regimes that sustained them.

Investigating what drives people to risk everything to express themselves in rebellious art, The Naked Blogger of Cairo uncovers the creative insurgency at the heart of the Arab uprisings. While commentators have stressed the role of social media, Marwan M. Kraidy shows that the essential medium of political expression was not cell phone texts or Twitter but something more fundamental: the human body. Brutal governments that coerced citizens through torture and rape found themselves confronted with the bodies of protesters, burning with defiance and boldly violating taboos. Activists challenged authority in brazen acts of self-immolation, nude activism, and hunger strikes. The bodies of dictators became a focus of ridicule. A Web series presented Syria's Bashar al-Assad as a pathetic finger puppet, while cartoons and videos spread a meme of Egypt's Hosni Mubarak as a regurgitating cow.

The rise of digital culture complicates our understanding of the human body in revolutionary times. As Kraidy argues, technology publicizes defiance, but the body remains the vital nexus of physical struggle and digital communication, destabilizing distinctions between "the real world" and virtual reality, spurring revolutionary debates about the role of art, and anchoring Islamic State's attempted hijacking of creative insurgency.

I RECEIVED A REVIEW COPY FROM THE PUBLISHER. THANK YOU VERY MUCH.

My Review: At a very low point in an ever-sinking US-Arab world relationship, this book could not have been a more timely read. The people the US Government left to twist in the wind...many of them Iraqis promised asylum in return for "betraying" their home country...all understand viscerally a fact the US and its soft, spoiled citizenry need to remember that they simply do not know: Tyrants and dictators use human bodies as propaganda tools to enforce their dominance.

The Gestapo and Putin's former employers, the KGB, are the most famous of these hideous organizations in the US. Worldwide, they are joined by our very own CIA, as well as innumerable unofficial, quasi-official, and openly governmental "state security" apparatuses. (Well, they can be enumerated, but I don't have the stomach for it.) The terror industry is thriving. Ask the poor souls who survived Abu Ghraib's horrors how they feel about the fact that the private contractors never faced prosecution or had to return one dime of the money the US Government paid them in spite of the fact many participated in the abuses. Ask the Kurds on the sharp end of Turkish weapons how their bodies are in danger of harm from a powerful, protected, well-armed state terrorism perpetrator of long standing. Human bodies, equipped with human souls, are routinely savaged and maimed by those whose idea of peace is best compared to the grave: Silent, dark, and unbroken.

At the dawn of the Anthropocene Epoch, in which climate change is a given and planning for it a joke, one small corner of the planet that we call the internet (no longer capitalized, please note) has taken a small degree of risk away from confronting tyrants. Author Kraidy, a most extraordinarily august person, with Directorates and Carnegie Fellowships and more under his belt, has taken a close look at the first Revolutions to be tweeted: The Arab Spring of 2010-2012. As we're now in the grips of a new political use of Twitter, it's deeply and rewardingly instructive to read this measured analysis of the role that social media did and did not play in this popular uprising.

The core of the book is the idea that, in a digital or analog revolution, the human body is central to our idea of the stakes, the purpose, and the desired result of any revolution. Seems sort of silly to say it...it's a given that a revolution is meant to free some group from the constraints put on them by another, which of necessity means the body is involved as it (at a minimum) carries around the wetware telling us we're not free. But extend the idea of revolution with its subtexts of battles and skirmishes of flesh into cyberspace and then what? 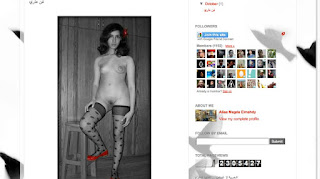 Aliaa al Mahdi in her native element, the internet
This photo ignited the entire Arab world, though I must say that it looks pretty darn tame to me. Far more provocative, in my opinion at least, is her protest photo in the pose of Lilith: 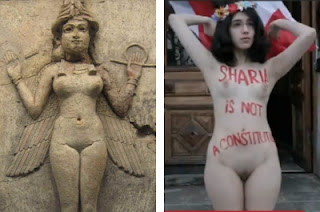 Her hearkening back to the Ur-protestor, the woman who refused to be subservient to a man and was cast off and out for her insolence, seems much more a statement of her principles and her point that a mere "beaver shot."

Author Kraidy then refines that daring act of the Naked Blogger into a more distilled and powerful meaning as part of "creative insurgency:"


...the notion of creative insurgency {explores} the mixture of activism and artistry characteristic of revolutionary expression and tracks the social transformation of activism into Art and ensuing controversies. At the heart of these processes is the human body as tool, medium, symbol, and metaphor...activists have deployed a rich array of art and media in fierce propaganda wars against murderous dictators. Mining the past for resonant symbols, creative insurgents execute daring physical performances, catchy slogans, memorable graffiti, and witty videos.

You'll need to be prepared for a long and upsetting journey into the hatefulness that our world never seems to run short of, I warn you now. That it is a view mediated by the art it has produced is not, I'm sorry to say, in any way a diminution of the horrors awaiting the bodies of dissenters across the globe. Author Kraidy, in his role as Chair in Global Media, Politics and Culture of the Annenberg School for Communication at the University of Pennsylvania, is a man whose knowledge of the topic is deep and broad. His eternally-at-war Beirut childhood, and an adult return to head the American Studies department of the American University there while the Arab Spring was springing, had to make him extra sensitive to the topic. The art world, so dismissive of Arabic art and artists while celebratory of the reductive and racist Orientalism (most famously excoriated forty years ago in a book by Edward Said) that fed their Eurocentric concepts of Arabness, discovered in the Arab Spring protest art a vibrant and exciting new way to harness the rage of the "outsiders" into a profit- and control-centered "creative-curatorial-corporate context" in Author Kraidy's memorable words.

What you can expect, then, is a fascinating and thorough delve into a new, or newly technologically expanded, level of insurgency. Artists have never not responded to politics and the world's injustice...Hogarth, anyone?...but the avenues and the reach of their creative insurgency are alarming to the tyrants and heartening to all the resisters and rebels the modern world's manifold oppressions have spawned.

Introducing the last section of the book, Requiem for a Revolution?, Author Kraidy reminds us of some facts as we contemplate the apparent dimming down of revolutionary action around the world:


A more dangerous threat looms over the Arab uprisings: death, at every turn, awaits the body. "The Specter of Death" hovers menacingly above the rebels...If creative insurgency is an artful explansion of the human body in a public space that foments a new revolutionary identity, then the dark shadow of fatality—through guns, bombs, fire, chemicals, starvation, disease, exposure, torture, beheading—is a threat to creative insurgency. Handheld drollery that once enjoined Mubarak, Leave, My Arms Hurt"(from brandishing revolutionary banners), looks positively rosy when set against pictures of emaciated corpses, bloody limbs torn asunder, or the numbers, those stupefying, ballooning numbers, of bodies slaughtered, diseased, displaced.

And the Kurds continue to contribute their mite, all thanks to the 45th President of the United States of America.
Posted by Richard at 9:03 PM