A VIKING FOR YULE, silly fun for the gingerbread-latte drinkers 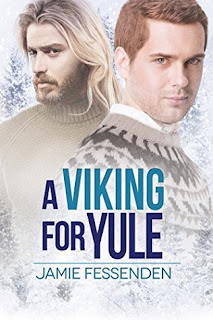 The Publisher Says: AFTER SAM'S GRANDFATHER nearly died in a blizzard one year ago, Sam has panic attacks in snow storms. So where does his friend Jackie propose they spend the holidays, as the last stop on their trip around the world?

But there's more in Iceland than snow. When Arnar, a handsome Icelandic man, offers to escort Sam on a several-day tour of the beautiful countryside, they soon find themselves drawn to each other. But Arnar is firmly rooted in his native soil, and Sam has to return to the US in a week to care for his ailing grandfather.

My Review: So sweet little (he's like 5'4") punkin Sam, a bit player in Author Fessenden's prior book A Cop for Christmas, gets his own love story! Jackie, the series (loose, but still counts) non-resident Auntie Mame, whisks Sam away on a world tour after some terrifying stuff happens to him (revealing what is a spoiler for the first book). True to Auntie-form, she hurls him at any number of eligible gay men in the various countries they visit. His timidity and inexperience with the world's many ways of being are, by the time the pair wash up on Iceland's shores for Yuletide, worn into a certain facility if not comfort with the strangeness he's now expecting and encountering.

But there at the international airport is Arnar. Long blond hair, studly muscles, surly attitude...even towards his "Aunt Jackie," whom he's known most of his life. And, if Sam's sharpening gaydar is any guide, a Friend of Dorothy's. Lovely! In every sense. Well, except the whole surly part.

Arnar, for his own part, is mourning the end of his relationship with Stefan (never met but despised by all Arnar's friends). He's hurting but he's a man, so he Notices Sam, being utterly charmed by his ears (of all things)...just not ready to let go of his sadz over the jerk Stefan.

The usual hijinks ensue, as they must in category romances. The Icelandic countryside and December weather play huge roles in the action. The elements are a big part of Arnar and Sam's falling in love with each other. The adventure that, as is ordinary for men, serves to bond them to each other, is largely dependent on weather. It is December in Iceland, after all. And the trope of hero-faces-down-fears is very much present.

But here we come to the crux of my problem with this lovely little bagatelle: By the numbers-ness. I don't believe for a second that, in this book's first draft, these men were the ages they're presented as being, ie thirtyish. They act like early-to-middle twentysomethings. They have packs of friends, just like early-to-middle twenties folk do; they have sullen fits, which frankly know no age but are usually less prevalent in the thirtyish bracket. They Have Adventures, not planning to do things that'll put them at risk like one does in the earlier twenties; they make HUGE life decisions on a whim, and that my dears is a dead give-away that they're nowhere near thirty. Sam has his sole remaining family member, ill and frail Grampy, to care for and about. He has also gone on an around-the-world trip for pretty much a year, at Jackie's behest and on her dime. I don't know about y'all, but that would make me wonder about the sanity of a thirtyish man; not a hair turned in a, say, twenty-five-year-old's case.

And the ending. Hm. While we need the de rigueur HEA, this one strikes me as...forced. It'd be a great last scene in a film. There's an epilogue that contextualizes it, but that's just it...it needs context.

Still! I can't say I read these books for their monumental and earth-shattering insights into character or innovations with the style-book. I read them for fun, and because I can tick off the trope boxes, I don't need to work at comprehending what I'm reading. This is a huge help to me while I'm in the process of getting this miserable apnea problem handled.