THE FORBIDDEN STARS, third and presumed to be last of the Axiom trilogy...but plenty o' room for more! 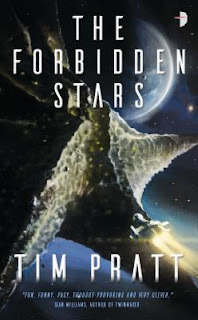 The Publisher Says: The ancient alien gods are waking up, and there's only one spaceship crew ready to stop them, in this dazzling space opera sequel to The Wrong Stars and The Dreaming Stars.

Aliens known as the Liars gave humanity access to the stars through twenty-nine wormholes. They didn't mention that other aliens, the ancient, tyrannical - but thankfully sleeping - Axiom occupied all the other systems. When the twenty-ninth fell silent, humanity chalked it up to radical separatists and moved on. But now, on board the White Raven, Captain Callie and her crew of Axiom-hunters receive word that the twenty-ninth colony may have met a very different fate. With their bridge generator they skip past the wormhole, and discover another Axiom project, fully awake, and poised to pour through the wormhole gate into all the worlds of humanity...

THIS BOOK WAS BORROWED FROM MY LOCAL LIBRARY. THANK YOU FOR TAKING SUGGESTIONS, LIBRARIANS! ALSO...SPOILERS FOR BOOKS ONE AND TWO (REVIEWS LINKED) ARE PRESENT

My Review: We're not under any illusions about the Axiom anymore, are we? They're the xenocidal monsters of which nightmares were first brewed, they're cruel and thoughtless and smugly superior...no, scratch that, they're oblivious to lesser life's reality and so find nothing or no one convincingly sentient except themselves. They're even working, while in hibernation, on changing the fundamental constants of the Universe! And all so they can prolong their own nasty existences (and those of some slaves to do the scut work, one supposes) in complete disregard of the fact that this fundamental alteration would destroy whatever life there already is in it. In spite of all that, here's Captain Callie Machedo and Ashok the engineer, the White Raven's Scotty, met in the middle of blowing the (apparently awakening, shudder) Axiom's shit up some more!

Some people don't want to live.

Or rather, some people are willing to risk death so that the Universe and its untold trillions of life-forms can, and will, live. An altogether more noble formulation of the same set of behaviors, no? Callie and Ashok are in an Axiom travel hub to destroy it for the Benefactor, and in the process steal something they really, really shouldn't have. The final day of the war is upon us. (That reference will make sense when you read the book.) Do your utmost and be happy with that, not certain of any particular outcome. That's working well for Callie and Elena in their settling-in love affair, for Ashok the 27th century's version of a tattoo addict, for Lantern the double-agent Liar, for Drake-and-Janice the Universe's most unusual conjoined beings.

That makes for a happy and fun read, right? Well...mostly...I'm never going to reconcile myself to the infodumping that the series contains in abundance, but what I realized about that is that the info is entertaining and necessary so...well...so there one is. It's a fact that cannot now be changed. I am still happy with the low-heat romance between Callie and Elena, since I read other subgenres of space opera for the sexytimes I crave on occasion. I was pining for more of Lantern, to be honest, but the story couldn't hold more of "her" without being seriously baggy at the knees. We're introduced to the Benefactor through his servant Kaustikos, "the one who burns," in the form of a floating basketball...I was picturing Sputnik the whole time and quietly chuckling...that delivers excellent intel exactly once and then goes into minor-character mode. The purpose of this itchy lapse becomes apparent. It wasn't a joy, waiting so long for it to eventuate, but it did and I got it. No other way to accomplish that plot thread's resolution.

But most of all, I've been pining for some details about Drake-and-Janice, the mashup person. How did this weirdness occur? How, in practical terms, did two humans get spliced into one (hitherto invisible in-story) entity? That, my friends, is the subject of an extended infodump delivered from page 269 to page 304. It wasn't necessarily deft, but it was *fascinating* and I enjoyed the Drake-and-Janice story as much as I'd hoped to. So much was clearer about how human individuality and individuation seems utterly natural to us but would present a serious puzzle for truly alien beings...rather like we humans find it puzzling to look at fossils and reconstruct the dead being's life from them. Drake and Janice were still within spitting distance of being alive after a nasty space accident; the life they share now was granted them by miracle-working super-healer white Liars who happened to be in the right place at the right time to reconstruct them. Only they got it wrong, and for the first time we're let in on how that felt all around, what that meant to Drake-and-Janice as entities made one but still alive, what identity and practical problems that's presented them.

One big coincidence, no, the passing immortals with a healing jones being there? But that's how Life is sometimes. Stuff, weird random stuff, happens; you're never the same afterwards, but you're well and truly alive and now what? Hence the melded pilots' skills being used by a very live-and-let-live Captain whose essential human decency means they're safe and they're respected for their skills but left alone to live as they like and/or can.

But wait, there's more! Callie and the White Raven are tasked by the Benefactor, whose contact with them is always through different cloak-and-dagger means, with the solution of the silencing of the Vanir system. Planets that the Liars, those "truthteller" cultists secretly still in service of their departed Axiom masters, had sold the humans rights to colonize, which subsequently went out of touch with the rest of humanity. When supply ships, then rescue missions, then military forces all vanished into the silent system, the system was pretty much written off. Human curiosity hates dangling threads...Callie gets the Benefactor's huge pre-payment for expenses...the crew agrees that their unique possession of a wormhole generator not, like the gateways the Liars sold them, fixed to any particular part of spacetime, will make this expedition both satisfying and enriching. What could possibly go wrong? They hold all the surprise-dealing cards!

Nope. Nothing goes easily...for long, anyway...and more Liars, singularly unappealing red specimens yclept "the Exalted," are slavering to get hold of the fresh specimens that Callie and Co. represent in their grand master plan to make the now-ailing as well as hibernating Axiom safe and sound in the newly dangerous Universe they plan to cooperatively destroy together. Excitement ensues, and I won't detail it as this is the whole point of reading space opera.

***FROM HERE ON DOWN THERE ARE SPOILERS FOR THE ENDING. YOU ARE WARNED TO AVOID THEM, PHOBIC READERS.***
---
***
---
***
---
***
---
***
Suffice it to say that it's always darkest before the dawn, and the goodwill of super-healers is a great thing to have in your back pocket. The ending, the point at which the conflicts end, was deeply satisfying, and the main villain's purpose and identity is at the root of Evil's Comeuppance. That's always a recipe for satisfaction in my book.

The series' threads are woven together satisfyingly. Callie will be one busy human lady for, well, ever; Elena her beloved xenobiologist-turned-medical-doctor will be there with her; the crew, from newly repaired though still conjoined Drake-and-Janice to Ashok the body-modder's ultimate modification to Lantern the Liar to Shall the AI, the White Raven and Glauketas, their asteroid home, will act as nucleation points for a whole new world of free and potent humans. It's a pretty satisfying way to say farewell to the world of the Axiom.

Unless, of course, we're treated to more after Author Pratt's had a lie-down....
Posted by Richard at 6:30 AM