THE COMEDIAN, a fully explanatory title for a theater novel set in Ancient Rome 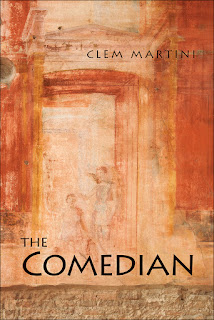 THE COMEDIAN
CLEM MARTINI
University of Calgary Press
$5.45 trade paper at Amazon or $24.99 via the publisher, $5.18 Kindle edition, available now

The Publisher Says: (from Goodreads) Titus Maccius Plautus' career is on the decline. Once renowned for bringing Greek comedies to the Roman world, now he struggles to stage a single play. Unlucky with money and unlucky in love, Plautus faces the world with wry dignity. This could be the performance that brings back fame and fortune, or the one that ends it all.

Engaging, thoughtful, and funny, The Comedian dives into the rough and tumble world of arts in its infancy. Clem Martini draws on his talent and experience to bring to life the signs and sounds of a world where playwrights suffered and succeeded--but mostly suffered.

(from the book's webpage) In the Roman Republic, comedy is a serious business. Nobody knows this better than Titus Maccius Plautus, the principal comic playwright of his time. Licking his wounds after a series of artistic flops and financial disasters, Plautus returns from his refuge in the country to Rome, desperate to produce a new play.

With limited financial backing provided by tough and striking bar owner Casina, Plautus recruits a company of actors from the amateurs and cast-offs he can afford. Led by a disreputable drunk who just happens to have a pedigree with one of the most respected traveling Greek acting guilds, the motley company unites an eccentric cast of characters on and off the stage. From Orestes, Plautus’ dour, thrifty director to the eager but untrained neophyte, Fronto, to the debt-plagued Plautus himself, each has a role to play, and each is not quite what they seem.

Can this company of misfits come together in time – and remain together long enough – to find success on the stage? With his creditors closing in, can Plautus stay one step ahead, or will he be finished, once and for all? Redolent with the sights and scents of the ancient world, this novel is a rowdy, boisterous ride through the realm of theater in its infancy.

THE PUBLISHER GAVE ME A DRC OF THIS BOOK THROUGH EDELWEISS. THANK YOU.

My Review: I salute you, Clem Martini, for taking a lifetime's interest in theater, its history and its incredible impact on each of us, and turning it into yet more (thirty plays authored and/or produced, standard texts on theatrical history authored, a graphic memoir with his older brother as artist) than you could reasonably be expected to. Plautus would approve: humor, tension, a spicing of sex, and an ending to break a smile on the reader's face.

"Recovered?" Orestes continues, his lips hitting each consonant. "Is that what you call it? Recovered? You," he says poking the old actor in the chest, "are an ancient, derelict billy goat, burping, farting, baaing, and in general eating up the scenery. If you were more intent upon your actions, your actions as we have rehearsed them, rather than upon preening for the audience, you wouldn't forget your lines. And by all that's holy, if you can't remember the lines, then at least improvise something clever. By Jupiter Maximus and all his punishing power, that stammering and umming and awing was pitiful."

If you've ever been in a play, you'll recognize every single beat of that peroration; if you haven't, you'll recognize that the author has and does. Bonus points to Author Martini for getting a good likeness of Plautus in his dialogue, as well.

Reflecting on the self-evident to writers impossibility of making others laugh, of conveying subtleties of meaning across language and time barriers, Martini's Plautus wryly says:


It's irksome how essentially untranslatable humour can prove. Lines that cause great hilarity in Greek lie down like sheep with colic, to sicken and die, in Latin.

So beautifully done...anyone who's tried to write, or translate, or perform humor gets it instantly; Plautus (and of necessity Martini) belongs to our fraternity; the bucolic ancestry of the Roman playwright is reinforced in such a way as to remind the reader of the temporal displacement of the story from us as well. After all, not a lot of twenty-first century people pull out sheep-death similes in pursuit of a point.

It isn't perfect. At times the impression is of reading a novelized play, with action taking place offstage or being relegated to "the chorus" to narrate:


Orestes urges me to keep writing, stay healthy, and abstain from garum. With that he claps me on the back, drains his cup, stands, and bids us both good night. Naevius nods as my Greek friend slips past him. I reflect as he leaves that there's always been a certain reserve between those two that I honestly don't understand. I know Orestes respects Naevius as a poet, and Naevius has praised Orestes's musical abilities to me many times. Still it's undeniable, there's tension when they sit together.

All of that reads as though it's stage directions and actor asides. It isn't bad, it isn't flawed in some way, but it distances the reader by removing us from the immediacy of experiencing the story with the characters (dialogue plus some of that narration) into straight narration of the story to us. Further distancing, at least for some very tradition-minded readers of my acquaintance, comes from Author Martini's use of non-standard dialogue tags:

He nods a moment, then takes another drink. "And you're satisfied with that?" he asks.

This is one example among many where I found myself wishing that he'd simply left off these tags entirely. However, the times when they're useful, what's wrong with "said" and, when something's a question, simply allowing this dingus: "?" to alert the attentive reader that an interrogative tone is to be used in their sub-vocal verbalization? (See what I did there?) (Oops, did it again!)

However, that very quality of stageiness is used to marvelous effect when Plautus has the creative soul's inevitable Dark Night of Self-Doubt:

Success or failure, triumph or humiliation, every single writer who has ever lived will recognize this moment. You're released from the divine madness of creation; the human side of you has no bloody clue what to do now, or next; and yet the chasm of Reality yawns at your feet and you're suddenly subject to gravity again. That. Rots. On. Ice.

The effect of the whole is, I think I've shown, engrossing and entertaining. Definitely recommended for classic-aged audiences and cautiously so for those of middle years. It's strong meat indeed Author Martini serves us, a taste of what we're in for, and that's probably not going to go down well with younger audiences (it made my Young Gentleman Caller cry):


The body is simply a leather mask that the spirit slips on when we are born. This is never so evident as when a person passes away, and you observe the shell stripped of its animating inner force.