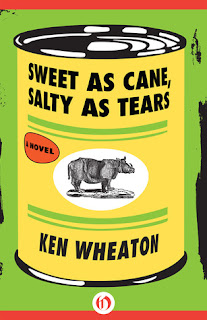 The Publisher Says: A freak accident forces a New Yorker to return to Louisiana and confront her Cajun past

There is nothing more dangerous than a spooked rhinoceros. It is just before lunchtime when Huey, the prized black rhino of Broussard, Louisiana, erupts from his enclosure, trampling a zoo employee on his way to a rampage in the Cajun countryside. The incident makes the rounds online as News of the Weird, and Katherine Fontenot is laughing along with the rest of her New York office when she notices the name of the hurt zookeeper: Karen-Anne Castille—her sister.

Fifty years old, lonely, and in danger of being laid off, Katherine has spent decades trying to ignore her Louisiana roots. Forced home by Karen-Anne’s accident, she remembers everything about the bayou that she wanted to escape: the heat, the mosquitoes, and the constant, crushing embrace of family. But when forced to confront the ghosts of her past, she discovers that escape might never have been necessary.

I RECEIVED A REVIEW COPY OF THIS BOOK FROM THE PUBLISHER VIA EDELWEISS-PLUS. THANK YOU.

My Review: It's funny how The Book for a particular mood will lurk until that moment hits. I needed an undemanding read, one that had nothing to do with the present-day mishegas I find both distasteful and unseemly; I found this book set in Obama-era New York City and central Louisiana. About a funeral, and coming to terms with what family means, what being in a family requires, how it is that Facebook has metastasized across nations and cultures.

Published in 2015, the book follows Katie-Lee, fiftyish and full of the fear that gives single people, as she returns to bury her little sister in the wake of a Facebook-meme-able death. In fact, she finds out about the life-ending from her colleagues at (unnamed but obvious) Advertising Age, their titters and chuckles about a humorous tale of a zookeeper trampled by a rhino morphing into a dreadful reality: That's her baby sister. The shamefaced colleagues try to make it right, but she's already launched the boat onto the Styx.

She has to Go Home. Not a flying visit. The Native has to Return. O frabjous day.

Must be done. She does it. Hijinks ensue; her Louisiana family, of her generation that is, are all au courant with the world as they see it on Facebook, which is a large player in the novel. No political crap yet, as this book was written and published before the 2016 debacle revealed how much influence the platform has over far more than one's personal life. No Instagram, glancing mentions of Twitter, and Katie-Lee's a screen addict whose phone running out of bars is a Biblical-level disaster. She has more in common with the grandkids of her sisters and brother than with them.

She honestly has no idea what to do with her sadness. Facing mortality for the first time is a life-changing experience. I did it in my 20s when the AIDS epidemic decimated the gay guys I knew and loved. I remember the emotions, the detachment from reality that realizing your own death is, inevitably and inexorably, coming closer and closer. Youth is gone in that moment, calendar be hanged. And Katie-Lee's life in Brooklyn isn't such that she's cushioned from the yawning emptiness of survivorhood.

Dig we must, chere.

The healing in this tale is family-wide, and inclusive. The tragedies of the past are present again as they always are at funerals; so are the fun memories that inject themselves into the geology of one's life. People whose acts are literally unforgivable are not forgiven, though that day will clearly come. But the truly unforgivable ones are the least likely to see themselves as needing forgiveness. THAT resonated. Author Wheaton nailed that. But he did so in a format, following a structure, and thus made sure the Lesson isn't A Sermon (and he includes one of those, a real dilly of a tone-deaf nightmare-from-Hell one at that) and moves on to the next laugh.

There's the rub. This is a nightclub act written as a book. These moments are Wheaton's Brooklyn party pieces connected into a gender-swapped story to make them cohesive. (In fact, Katie-Lee's ex Howie sounds to me like Wheaton's ex only maybe not gender-swapped, if you take my meaning.) They're not less real or funny for that, but the structure of the book does nothing to hide this fact from knowing eyes. I'm from South Central Texas, I had a mamaw and she was transplanted Cajun stock, and in the days when I had party pieces, they fit together much the same way as Wheaton's do. So my eyes weren't fogged up but rather cleared by reading the present action-memory-lesson structure.

I hurry to remind y'all that 3-1/2 stars is a positive rating. I'm not trying to blast the author; in fact I liked the rhythm, was comfortably on board with the predictability of it, and felt completely relaxed and happy and at home. Nothing much happens. No excitement apart from a funeral games scene that about popped my eyeballs out from trying not to wake my roomie up from the laughing.

So do I recommend this read? Sure, so long as you're a storytelling-voice addict. It's $8 on your ereader and that's not a lot to spend on four or five hours' vacation without moving. But if you're not in the mood to listen to stories, this will not be a successful trip to Opelousas. (Where Mamaw's family came from! Now, I don't *know* that any Tullises married any Wheatons, but I bet if we....)
Posted by Richard at 9:17 AM