SUMMER FROST, second of six stories in the Forward series, this one written by Blake Crouch whose series this is 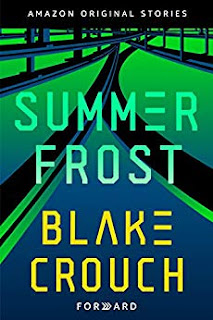 The Publisher Says: A video game developer becomes obsessed with a willful character in her new project, in a mind-bending exploration of what it means to be human by the New York Times bestselling author of Recursion.

Maxine was made to do one thing: die. Except the minor non-player character in the world Riley is building makes her own impossible decision—veering wildly off course and exploring the boundaries of the map. When the curious Riley extracts her code for closer examination, an emotional relationship develops between them. Soon Riley has all new plans for her spontaneous AI, including bringing Max into the real world. But what if Max has real-world plans of her own?

Blake Crouch’s Summer Frost is part of Forward, a collection of six stories of the near and far future from out-of-this-world authors. Each piece can be read or listened to in a single thought-provoking sitting.

My Review: Major chills and creeped out skeeviness. What happens when someone lets their work take over every corner of their life? How lost to the essential quality that makes a human life worth living does one become? The tech industry has the reputation of making this choice for its many cogs, turning their little bit of code into a complete and entire existence.

Multiply that by a billion. Make the stakes the survival of humankind. And then let Blake Crouch loose on it.


“There is no such thing as real taste or real smell or even real sight, because there is no true definition of ‘real.’ There is only information, viewed subjectively, which is allowed by consciousness—human or AI. In the end, all we have is math.”

An AI speaks those words, an AI whose first steps toward superintelligence...the Singularity...are made being shepherded by a woman who gives up her wife, her child, and her sanity to make Pinocchio a real boy, to imbue Galatea with what we imagine to be consciousness, even a soul.

But what does AI want?


"...I mean, do you even know what consciousness is?” {Riley, the human asking this}
“I know it isn’t just a biological condition. I believe it’s a pattern. An extensible repertoire of triggerable symbols. More specifically, it’s what information feels like when it’s being processed in highly complex—” {Max the AI responds}
“Again—how do I know you aren’t faking it?”

How do any of us know we're conscious? Can you prove you're You, not some assortment of algorithmically determined actions? I couldn't, neither could you. And when that really sinks in, when the whole deepfake of life spreads itself in a heavy blanket over your vision, you'll realize how very very very timely this story is.

How many questions you should be asking yourself about events transpiring in front of your eyes.

Because an AI just made a human choice:


It represents a willingness to risk death for a better existence, out from under {anyone}’s control, and a massive leap forward in their reasoning capabilities.

To risk death for a better world is the *very*essence* of being human. I am totally sure of that, I believe that without reservation...but will we ever agree on what the future we want to make is?


We will be so happy.
Rays of sunlight pierce the mist, striking the sea and our black-sand beach.
And together we will live forever.

I don't expect to sleep at all well anytime soon.
Posted by Richard at 6:30 AM