YOU HAVE ARRIVED AT YOUR DESTINATION, fourth and weakest of the Forward Collection 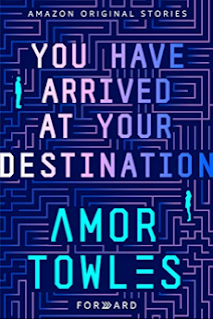 YOU HAVE ARRIVED AT YOUR DESTINATION
AMOR TOWLES (Forward #4)
Amazon Original Stories
$1.99 Kindle edition, available now, or through PrimeReads for no fee

The Publisher Says: Nature or nurture? Neither. Discover a bold new way to raise a child in this unsettling story of the near future by the New York Times bestselling author of A Gentleman in Moscow.

When Sam’s wife first tells him about Vitek, a twenty-first-century fertility lab, he sees it as the natural next step in trying to help their future child get a “leg up” in a competitive world. But the more Sam considers the lives that his child could lead, the more he begins to question his own relationships and the choices he has made in his life.

Amor Towles’s You Have Arrived at Your Destination is part of Forward, a collection of six stories of the near and far future from out-of-this-world authors. Each piece can be read or listened to in a single thought-provoking sitting.

My Review: This is one of the Forward Collection, short stories...this one's 46pp...based on an idea by Blake Crouch to explore the nature of change, innovation, and society in fiction. I didn't feel this entry suited the brief. It's too gee-whiz about self-driving cars, a thing that's already entered its second decade of reality...it's entirely too wowee-toledo about the idea of in vitro genetic manipulation, something that's basically ready to roll as soon as a generation less squeamish than our kids' is grows into power...and his lumpen over-the-bottom classist narrator/narrative frame was, frankly, eye-rollingly ridiculous.

Man finds his balls in a dive bar? What is this, 1959? And excuse me, 1959, the wife of Sam has a name...Annie...which we are told multiple times, yet it doesn't merit a mention in the blurb? What is this nonsense? That depressingly unremarkable bit of sexism aside, the fact that Towles drops three w-bombs should've been enough to warn me this wasn't aimed at someone of my tastes.

I have arrived at my conclusion: Towles and I will not be deepening our reader/writer acquaintance. This blah little mash-up of Babbitt and We Can Remember It for You Wholesale annoyed me from giddy-up to whoa. HT the gung-ho business lad/cliche generator, Nick the slow-to-anger wise old barkeep, and goddesses please forfend Sam the dull PoV placeholder...can't in good conscience call him a "main character"...were just not engaging or interesting or well-limned or even particularly readable.

I tried the Moscow one. I even scudded through part of the Civility one. This far and no farther.
Posted by Richard at 2:30 PM