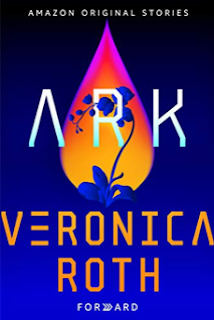 The Publisher Says: On the eve of Earth’s destruction, a young scientist discovers something too precious to lose, in a story of cataclysm and hope by the #1 New York Times bestselling author of the Divergent trilogy.

It’s only two weeks before an asteroid turns home to dust. Though most of Earth has already been evacuated, it’s Samantha’s job to catalog plant samples for the survivors’ unknowable journey beyond.

Preparing to stay behind and watch the world end, she makes a final human connection.

As certain doom hurtles nearer, the unexpected and beautiful potential for the future begins to flower.

Veronica Roth’s Ark is part of Forward, a collection of six stories of the near and far future from out-of-this-world authors. Each piece can be read or listened to in a single thought-provoking sitting.

My Review: The Svalbard Global Seed Vault is a very real thing, one that I am a bit surprised exists...it's so logical, so self-evidently necessary a thing that I'm amazed some religious nut or another hasn't blown it up...and has existed in differing forms since 1984. If there is to be any smallest hope of survival for humanity, this type of gene bank/seed collection/research project must exist and be replicated many, many times over. Blessedly, the Nordic countries and Kew Gardens in the UK are making this global movement happen. I personally thank them for this difficult, contentious, and urgent task being done to benefit all of humankind.

Author Roth, whose Divergent series was not to my personal taste, is a skilled phrasemaker and a keen observer of Life. I was utterly transported to Svalbard, brought *right*there* by this stellar phrase:


The land had glowed blue—beautiful in the way that a Rothko painting was beautiful, because it was empty enough to shrink a person and then swallow them.

Two things I adore—Arctic landscapes and Rothko paintings—brought together in a way I'd never so much as dreamed was possible. I treasure moments of discovery like this, they make mental furniture fresh and interesting again by unexpected interrelationships.

Samantha, whose world was always going to be destroyed in her lifetime by the irresistible force of a five-mile-wide asteroid Author Roth (or series creator Blake Crouch, I don't know for sure which) named "Finis" (Latin for "end" and the title of a much-anthologized story from a 1906 issue of The Argosy magazine) meeting the Earth's crust, is an ultimate orphan...her family all dead...as well as a detail-oriented and thorough person. Perfect type to have working on this program, like she was designed for it:


So maybe {her father} had been apologizing for giving her life in the first place, when he knew it would be full of dread. She wished she could have told him that life was already full of dread, no matter who you were. That there was nothing you could have that you couldn’t one day lose.

She volunteers to remain in Svalbard cataloging germ plasm samples for inclusion in the Ark Flora's hold. This is it, you see, these last few items from the seed bank represent the final species on Old Earth to make the deep-space voyage to Terra, our new home. Samantha, however, is holding a secret: She has decided she ain't a-goin' since, if she stays, she will have the one and only chance anyone will ever have to experience first-hand the end of the world. The *actual* end of the world. Someone without close ties can make that decision for themself, no one really can argue...and since she hasn't shared the plan, no one will.

Doctor Nils Hagen, an eminent widowed scientist, is like Samantha. He's not interested in a space voyage he won't live to see the end of; he'll die here in his greenhouse full of the orchids he so passionately loves. In Svalbard. Not far from the North Pole. Privileged much, Nils? He's lost his will to live with his wife's death, and Samantha relates to his desire to see the end of something we all thought should be eternal: Home. After all, what use is a future without your love in it? His wife gone, his orchids dying in Svalbard as the sun goes out for a generation or two; nothing on an Ark for the likes of his old-man ass.

Samantha isn't old enough to know that the question, "what's your favorite...", isn't one old people care to answer. How the hell can you, brash young pup, even begin to scrape the frost from the corner of the windowpane that we've allowed to frost over so long ago that glass was a novelty item? If we tell you something, anything at all, you still won't know what you're asking: "Look at everything you've ever done and thought and felt about this thing, sort through the Alp of memories, and spit some pat, facile phrase into the whippersnapper's ear. Maybe she'll quieten down then." Nils tries an old stand-by: "I don't have a favorite. I love them all equally."


“You just can’t—and if you did, then it’s the same as loving nothing at all. So you have to hold just a few things dear, because that’s what love is. Particular. Specific.”

Smart, this one. Saw through that "hush now, little one" response in a heartbeat!

So a friendship begins. And so Nils, with so many ideas and so much information, begins to let Samantha see what truly happens when The End has a date on it, how life lived becomes A Life, how meaningless nothings are, in fact, everything as well, and how utterly impossible it is to see The End without also seeing In The Beginning clear as sunlight on water in, on, over, above, around it.

When the student is ready, the teacher will come.
Posted by Richard at 3:07 PM