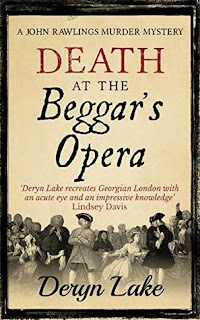 The Publisher Says: John Rawlings is among the beau monde enjoying a performance of ‘The Beggar’s Opera’ in Drury Lane when the leading actor – the notorious philanderer Jasper Harcross – dramatically falls to his death on stage. As Rawlings and the Blind Beak hunt for vital clues, they discover a hotbed of rivalry both on and off the stage which produces numerous suspects and questions.

As the search takes on a new intensity, John Rawlings soon finds himself on an intriguing trail of obsession that leads to the dark heart of a cold-blooded murder.

My Review: I wasn't expecting the solution to this murder. I could see how it was prefigured, though not exactly in line with generally accepted ideas of "fair play"...the Apothecary sees something we don't and *flash* into focus comes the solution, a very Dame-Agatha thing to do...so I'm actually more, not less, interested in reading the third book. Also of great appeal and interest to me are the sensory parts of the story: the sights of a London where Kensington is a country town, the Lincoln's Inn Fields were actually fields, there were houses on Pall Mall, there was a "Chelsea Bun House" for real, all these are delicious to me.

I'm sure the twee use of job titles as character labels is to some tastes, but "the Apothecary," "the Blind Beak," et alii, aren't delightful to me. I accept them as attempts at whimsical charm; backfire in my ears, though.

I had a suspect all fitted up for the murder, and was quite sure I was right. (Look at all my Goodreads Kindle notes marked "spoiler" (membership required, but free) if you want to see my logic.) I enjoy it when authors catch me out like that, it makes me really think about why I was so sure before the reveal that X is guilty, and that means going back over the whole puzzle to see what I missed. For this seasoned citizen, anything surprising in a puzzle is a Good Thing.

I am quite hesitant to do so, though, because there are SIX w-bombs dropped *shudder* and there is more, though less offensive by a slight hair, homophobic idiocy present. There's a bog-standard heteronormative locution about red-blooded males lusting after women; but there's this gem of genuine, deeply felt venom:


‘D’you have some verdigris for my face paint?’ asked an emasculated nothing, waving a handkerchief stiff with powder.

The 1990s were quite some time ago, and that's when Deryn Lake wrote these books. But I was a thritysomething all the decade long, and I know of my own personal knowledge that this kind of effeminacy-baiting was frowned on even then. Period appropriate arguments are null and void: This book wasn't written in Georgian England. It was written in the sad, bad barely-post-Thatcher era. This nastiness, present in the first book as well, is a choice made by a modern person to use nasty, insulting language about people the author clearly doesn't like.

So that third book will wait to enter my Kindle until I have some utterly uncommitted money (so no earlier than after the 2020 elections, I give all my uncommitted money to the campaign I support until then), or someone gifts it to me. I don't like this trend. I disapprove of the sneering nastiness of homophobia. I'm not sure I won't see it again...actually, if I'm honest, I am pretty sure that I will see it again...so I don't want to give the person who's sneering at me and mine any more of my money.