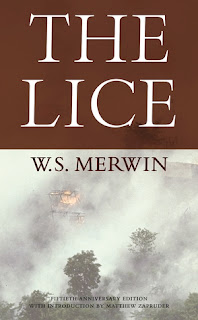 The Publisher Says: This Fiftieth Anniversary edition celebrates one of the most ground-breaking books in American poetry. When first published in 1967, W.S. Merwin’s The Lice was ground-breaking. Its visionary urgency directly engaged the nexus of aesthetics and morality, exerting an immediate and lasting effect on the writing and reading of poetry. Like all great art, this monumental work continues to inspire.

As Merwin discussed in an interview, “The Lice was written at a time when I really felt there was no point in writing. I got to the point where I thought the future was so bleak that there was no point in writing anything at all. And so the poems kind of pushed their way upon me. I would be out growing vegetables and walking around the countryside when all of a sudden I’d find myself writing a poem, and I’d write it.”

My Review: Merwin died in March 2019. I first encountered his poetry in 2010, after seeing him in a documentary about the life of the Buddha. His even-tempered, self-deprecating way of puncturing the Deadly Seriousness of the other talking heads in the film was memorable; his poetic voice had to be as lovely, right?

Um. Rain in the Trees didn't wow me. It's from the 1980s sometime, and permaybehaps forty years of poeting had worn him down. It wasn't for me, as I am informed the polite formulation of "what the actual FUCK *is* this crapola anyway?!?" is phrased.

He died; I ran across that fact on Wikipedia; connected him with the nice old buffer in the Buddha thing and ILL'd this 1967 collection of Vietnam War-era stuff. It's a darn good thing I did. THIS poetry I like! Here is where the fortysomething poet whose professional life was contemporaneous with Ted Hughes, Robert Bly, Sylvia Plath, and Denise Levertov (all friends of his) and the Beats (not friends of his), those slashers-and-burners of whatever rules there were at that point, were working.

Merwin wasn't going to be a Beat, they were too raucous for him. He got Pulitzers (twice!) for poetry, he was the United States Poet Laureate, he translated Neruda, he translated Euripides, he translated Gawain and the Green Knight (Amazon link; no monetization) in 2002; he was a busy professional poet. His legacy will last a while longer, though I doubt he'll be as enduringly popular as Seamus Heaney or Neruda...not enough there, there...and he will find his way into anthologies for a while after that.

But this collection, second of Merwin's that I've read, is worthy of your eyeblinks. It says something deeply meaningful in a personal yet relatable way. Merwin wasn't a groundbreaking iconoclast, and some of his early stuff I've run across was so pretentious and self-important that I am amazed the same man wrote it as wrote these poems. His later stuff was, well, in a word it was tired. Overworked the vein, it collapsed. But this? Prime-of-life, peak-of-powers poetical punditry. Every poems means something, both on its surface and on its interior. Read a poem one way, it's pretty; read it another, it's shattering.

Let me get out of the way so you can see if you agree:

So it is evening
With the rain starting to fall forever

WHEN THE WAR IS OVER

The thing that makes this book so lovely is that it includes a dozen or so facsimiles of Merwin's hand-written or typed manuscript pages, some on glossy photo paper and two printed inside the paper cover, that really bring the reader into Merwin's emotional orbit. Seeing the pages that he composed his thoughts on makes the typeset version of the poem (one is "Caesar," which I inserted above) that much more meaningful. His presence, albeit in mechanically reproduced form, is *there* and that causes no small amount of spiritual-connection thrums through my non-poetical soul.
Posted by Richard at 6:30 AM