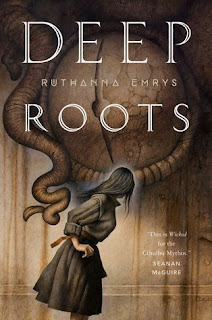 The Publisher Says: Aphra Marsh, descendant of the People of the Water, has survived Deep One internment camps and made a grudging peace with the government that destroyed her home and exterminated her people on land. "Deep Roots" continues Aphra’s journey to rebuild her life and family on land, as she tracks down long-lost relatives. She must repopulate Innsmouth or risk seeing it torn down by greedy developers, but as she searches she discovers that people have been going missing. She will have to unravel the mystery, or risk seeing her way of life slip away.

My Review: Second novel in what I devoutly hope will be an ongoing exploration of the Lovecraftian (or Cthulhu) Mythos by QULTBAG Author Emrys; this time it's the Summer Solstice, so we're six months after the events of Winter Tide. The writing is, as always, luxurious and replete with the most pleasurably unexpected moments of character definition:


Neko’s familiar dreams lay open above me. Twists of color, scattered images: buildings, imagined cities, the people on the subway. She twitched among incomplete ideas. They spilled over the edges of everyday reality, coloring directions that she wasn’t able to travel. (Aphra is speaking of her Nisei internee "sister" from the camps.)

He separated his hands, unraveling finger from finger. (Ron Spector, gay FBI agent, is described here. He is a man torn and mended one too many times.)

A pale man, gangling in a tweed jacket, walked hunched as if against blistering wind, arms tight across his chest. He caught sight of an awning marked in Chinese characters and shuddered, hurrying on. (Lovecraft cameo! And bloody well perfect!)

In every case, Author Emrys makes this kind of observation completely without fuss or fanfare. These are the characters, the behaviors and thoughts are theirs; no need to make a song and dance about it, this is what that person would do/say/feel. I trust Author Emrys implicitly to tell me what I need to know when it is most helpful for me to know it. This is a characteristic of all of her writing that I've read. It's why I will buy and read more of her stories as and when they come out.

The Mythos itself is replete with amazing, juicy weirdnesses like the Mi-Go, or as the Deep Ones call them "meigo," betentacled crustaceany Outer Ones whose corporeal presence in out tediously limited and limiting 4D spacetime isn't remotely complete; entire segments of the creatures exist in dimensions we cannot access with our sensory equipment. Here's one image of the beings, slightly off from what Author Emrys's evocation of them summons in my brain but better than trying to word-paint them for you (or spoil the book's amazing evocation!) so you can get some traction on where this story *is*: 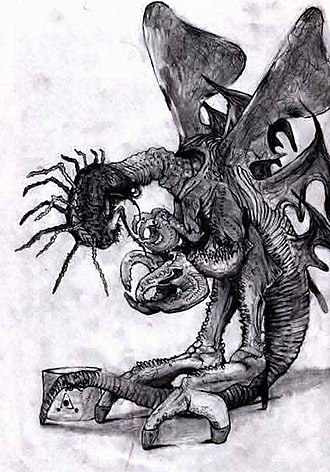 The Outer Ones are repugnant to Aphra, our main character; they aren't right, the way she knows that she herself isn't right to "People of the Air" like thee and me. But they are practically speaking immortal, unlimited by mere 4D spacetime's demands, and so vastly more intelligent than merely mortal Humanity; they have developed a (strange) moral code they adhere to, they are very much creatures of deep philosophical thought:


Doesn’t Nyarlathotep tell even you to ask the most dangerous questions, and travel as far as you need, wherever you need, to find the answers?
(Nyarlathobuddha, sounds like to me.)

To accept, without trying to change, the errors of the universe. Worse, though, to let our haven enforce the illusion that the universe can always be altered. Architecture as debate. Very much my thrice-mate’s style. (Spoken by one of the Outer Ones allied with Aphra about the leader of the Outer Ones's opposition.)

We seek the civilizations capable of living with difference, who can look on the vast and variable universes without fear, who can recognize wisdom wherever it’s found.

This, then, is the heart of the Outer Ones's need in our dimension: They are learning about us for their own purposes, not quite like the Yith, those truly immortal and utterly amoral scholars and recorders in the Archive of the entire body of knowledge that all beings in all dimensions have accumulated:


They boast of all they’ve learned, but write nothing down and call their work finished when all they’ve done is talk. They see everything and learn nothing; they are an embarrassment to Nyarlathotep.

The Mi-Go need something. This is value, for them, created value that pleases Nyarlathotep. The Yith? As we learned last book, and as several of Aphra's confluence (her metaphor for created family, logical as opposed to biological family) continue to wrestle with the aftermath of in this story, they aren't interested in what the knowledge they are collecting is, they are only determined to collect it, however and wherever they can, consequences be hanged. Which is why Winter Tide took place in Arkham and at Miskatonic University; and now that the Outer Ones are the opponents, where better to acquire truly useful knowledge than New York City?

Author Emrys agrees with me. She celebrates the very things that make this my home:


New York is full of immigrants and the United States is used to taking them in—we may be able to help you.

The city’s rhythm was constant when I paid it mind, but fickle in its effects. It could buoy me with excess energy, then wear me out a moment later with the pace of its million heartbeats.

Outside, the breeze brought relief: still rich with sweat and trash, but topped with the remnant of sugared pastry and the homesick scent of hot dogs.

New York, for all its height and humanity, was a breath from the ocean, and would pass in a geological instant.

Gigantically and brobdingnagianly replete with differences and conflicts and all the other things that vastly increase a culture's store of knowledge and wisdom, New York is the perfect place for the Outer Ones to set up shop! Add in the borning Cold War, the incredible postwar economic boom, and the seaport...well! I ask you! What better stewpot, pressure cooker, percolator of a place to locate a spy ring! Which is what the Outer Ones are...their internal factions can't agree whether to continue to passively watch Humanity boil itself or, out of deep savior complex fantasy needs, to intervene and "help"/force us to behave:


We needed Nnnnnn-gt-vvv’s passivist faction to reassert their influence and to hold sway over what their species did on Earth.

But Aphra and Company need to adjust their prickly, offended sensibilities to the Outer Ones's very real intent to help fellow creatures on a path to self-destruct:


You think we don’t understand family, but we do. We recognize many kinds of family, many kinds of connections that matter. We understand duties beyond obedience, and loyalty that can transcend species. We’re not the demons you think, tempting children away from the safe shadow of the gravestone. We serve a greater purpose too.

But help ain't help when it ain't asked for, is it. And that is where the whole rushing, roaring climax of the story leads us: What help are we willing to ask for? And what price offering to help a species that, in the main, wants to vomit when your pandimensional person enters its members's frames of reference?

The attentive will recall that I gave Winter Tide four and a half stars two years ago. Then the attentive will cast their eyes upon my less-than-four-stars rating for this book. Then consider the warbles of pleasure in this story and its writing, its very universe, that have occupied me for over a thousand words. "What gives, Papaw?" the attentive will ask.

Freddy and Frances, excess baggage in general; S'vlk, Obed Marsh, and Shelean; not one of these characters has a hope in hell of making a lasting impression on the reader. They are competing for attention with characters the reader has already invested in and much more heavily than possible with them. I have read this book twice, a year apart. That was deliberate and calculated. I wanted to be absolutely sure I felt that I was fair and reasonable in my annoyance and subsequent chastisement of almost a whole star's docking. (I mean, it's not like Author Emrys will be hurt and dismayed about my review or like there'll be any kind of backlash; but it's an article of faith with me that I should behave online the way I would in person and I'm always quick to praise and deliberate in disappointment.)

The extra characters add little, detract much, and cost a great deal of forward momentum. The fact is that I'm always shifting gears, like driving a five-speed sports car up Lombard Street in San Francisco during rush hour. The issue grows and becomes very distracting by halfway through the book. I want the urgency of Winter Tide to continue, and with the immense broadening of this story, it does not.

I did not want to offer false praise, and I haven't; I did not want to stint on what I feel is merited celebration of Author Emrys's reimagined Mythos, and I do not think that I have; but, in the end and after a year's thought and consideration, I can't help but share Aphra's prayer for Cthulhu's help in her desperately overworked mind's ease: