LANNY, which by the time y'all see this, we'll know the Booker fate of 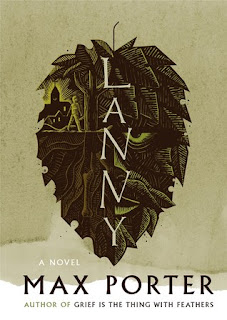 The Publisher Says: There’s a village sixty miles outside London. It’s no different from many other villages in England: one pub, one church, red-brick cottages, council cottages and a few bigger houses dotted about. Voices rise up, as they might do anywhere, speaking of loving and needing and working and dying and walking the dogs.

Dead Papa Toothwort is awake. He is listening to this twenty-first-century village, to his English symphony. He is listening, intently, for a mischievous, enchanting boy whose parents have recently made the village their home. Lanny.

I BORROWED THIS BOOK (THANK GOODNESS!) FROM MY LOCAL PUBLIC LIBRARY. THANK YOU!

My Review: This book is on the Booker Prize longlist. That means I, to remain engaged with the literary world as much as I can be, want to read it. I should've made a moment in my headlong rush to consider the portent of finding this typographical sensibility-bashing right up front: 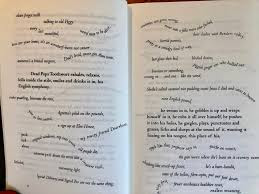 from p9 (set in the fashion of the spread above):
and then he hears it, clear and true, the lovely sound of his favourite.
The boy.


It would have the head of a dolphin and the wings of a peregrine, and it would be a storm-warning beast, watching the weather while we sleep.

Dead Papa Toothwart hugs himself with diseased larch arms and dribbles cuckoo spit down his chin. ... Surgical longings invade him, he wants to chop the village open and pull the child out. Extract him.
***
I am old enough to remember concrete poetry's last go-round in the 1960s. But good lawsy me, the concept of using text design, then typography, to force the reader to step outside the linearity of the ordinary reading experience has been around for quite some time (Aldus Manutius, anyone? Hypnerotomachia Poliphilii jangling a distant bell?), even predating by over one thousand five hundred years the invention of moveable type.

So yes, Dead Papa Toothwort's sections weren't a surprise to me, and I was a wee bit unhappy to encounter this dratted artsy-fartsy over-the-top goof in a book so short it needs to be marketed as a novella. Really. You, Author Porter, don't trust me to be swept along by your words, so you play silly buggers with the poor printers and binders. I wonder what the spoilage rate was on this title.

So let's look at this book's actual text, shall we? That way it's not me offering my opinion, as I can hear the GOTCHA!! Gangers tuning up their tutters to tut at me, in YOUR opinion, goes the intended-to-be-caustic dismissal of my tedious, overbearing man-ness daring to say I think something without hedging it about with disclaimers etc etc etc:
from p31 (Pete is speaking):


This, Lanny, is a significant place.

This is the point at which you can no longer be seen. The village is always watching, but past this point you're beyond their gaze.

Basically, a more loudly trumpeted and darkly foreshadowed plot twist I have not seen.


I vote it's not the slightest bit weird, said Greg. He's Peter Blythe, he was pretty famous back in the day, so you're getting a bargain. And if they get on well, and he needs the company, go for it.

'Needs the company' is exactly why it's not right. It's unprofessional, said Sally.

Exactly, says Robert, waving his expensive salad tongs. Who needs the company? Are we lending out our son to stave off Pete's loneliness? Like conversational meals on wheels for sad old artists?

Oh, fuck off, Robert, I said. Is it beyond your shrunken world view to imagine that something nice might exist without money ever needing to change hands?

Mum, Dad, and the Village arranging themselves on the sides they'll occupy when The Twist twists their collective nose hairs.


He leaves the village riding the smells from the kitchens, spinning and surfing, wafting and curling, from Jenny's lasagne to Larton's microwave stroganoff, Derek's hotpot-for-one, such rich sauces, so much sugar, was never so varied as this, not-very-recently-dead meat dressed in fancy flavours, he laughs, funny busy worker bees of the village stuffing their faces and endlessly rebuilding and replacing things. All they are is bags of shopping and bags of rubbish. He takes such offence to the smell of Pam Foy's stir-in jalfrezi sauce that he tears a bit of his nightmare skin off and shoves it through her window. A truly horrid dream. Sleep well Pam, he chuckles, as he floats homeward across the field.

Portentous. Are the frissons frissonning up your horripilating arms?

p61 (Lanny's mum, whose name we still haven't learned yet, is speaking):


One morning, I heard a little scream. A pained noise. Animal rasping. I couldn't tell where it was coming from. I didn't know what to do. I felt I needed a rural life-advice number I could call. Hello, there is tiny screaming, there is a small beast whining, and I am a depressed out-of-work actress and my husband is a city slicker who wouldn't know a cow from a boar.
***
The next page and a half aren't pleasant.
***
Now how do you feel?

I felt capable, competent, and clear-minded. I bleached the sink, washed the knife and returned it to the drawer. You and I have a little secret now, I said to the blade.

1) Actress? An actress who never hears or even thinks her own name? 2) What's your husband got to do with what happens? 3) ::eyeroll:: MEN WRITING WOMEN: WOMEN ARE NOT ALWAYS THINKING ABOUT US. GET OVER IT.


I can usually see a way to understand terrible things. Satanic worship, decaffeinated coffee, cosmetic surgery, but Renoir's portrait of Madame de Bonnières? No. It cannot be understood or forgiven. And framed in gold plastic and spot-lit from above? No offence intended, Charlotte, there is not a chamber in hell hot enough for a woman of your taste. 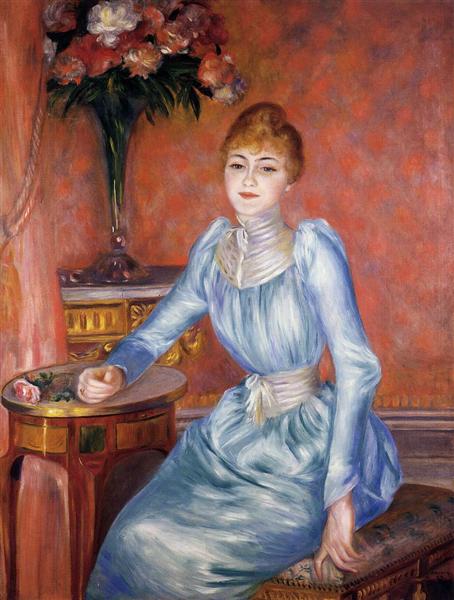 Portrait of Madame De Bonnières (Henriette Arnaud-Gentil, Gräfin De Bonnière), painted 1889
This is a meditation in response to a local mum whose...discomfort...with Mad Old Pete the faggot coming to pick up Lanny for his actress mum, as she makes him wait outside her sacred child-stuffed grotto while she calls actress-mum to be sure she's not sending the child to be raped and murdered by the slavering pedophile. *sigh* Familiar with that one, I am.


In the bus shelter as we passed there was the Henderson boy with Oscar whatsisname from Yew Tree Cottage and they were passing back and forth a joint as big as a church candle, a floppy, knuckled, badly-built thing, and my word it smelled nice. We nodded as we passed and I raised a hand in greeting.

WEIRDO coughed one of them, spluttering into giggles.

I was a little stuck for what to say and then Lanny asked, Do you think they were talking about me or you?

Tedious petit-bourgeois snobs with the cultural nous of parsnips judge what they can't understand and, as The TWIST!!! approaches, Pete's gonna get it in the neck.

Seriously. Everybody got that? Are we all on the same page now? Permaybehaps not...


It says, in small letters at the end of the {Domesday Book} entry {about their dreary little village}, barely legible but I've seen a photograph of it, Puer Toothwort.

Oh Peggy, I tut, you rotter, what a load of old bollocks.

It says it, Peter. It is written. He's been here as long as there's been a here. He was young once, when this island was freshly formed. Nobody was truly born here, apart from him.

So he's older than you? Surely not. Right then, must deliver this little artist home to his parents.

Oh, and the horriblity of the w-bomb puts the moldy cherry on the shit sundae with extra worms we're being served, doesn't it.


The sound in the village was all wrong. I went for my walk around the block and got the ill feeling and hurried back. The darkness was uneven, slippery. I sought refuge in my kitchen but the pressure between different objects in my house was all wrong. Something was bad. I had a glass of drink on the table, a newspaper and a pen, and the three of them were fit to lift off and explode. Things were closing in.

Now. Not even the most backward, most challenged reader can possibly misunderstand The Import of that last sentence. Wait...can't count on it...best explain: PETE IS SOMEHOW AWARE THAT HE'S ABOUT TO BE BLAMED FOR A BAD BAD THING. Would you care to guess what that bad bad thing is, who the bad bad thing relates to? Anyone?

Now there are two more sections of this overblown sludge. I read them, but honestly, I do not think you need to. If you don't already know what happens, and allow me to assure you that there is indeed A Twist, please send me a message and I'll tell you.

Or I'll mess it up so the shy can still read it: Lanny survives to adulthood but Jolie the actress/novelist divorces tedious Robert and by goddesses they are well and truly better apart. The Toothwort thing doesn't end, it just stops. There's Pete and Lanny (now called something else) drawin' and drankin' in the purged-of-evil woods.

Seriously. We go all this fucking way and there are pages of typographical shenanigans and THAT. IS. FUCKING. IT.

I think Author Porter deserves some serious kudos for making the points he makes about how the very bones of reality are malevolent in some deeply alien ways. He doesn't spend a lot of time soppily sloshing tears and humidly summoning sobs, either, so there's that going for him. Hence all three of my stars. Seriously? Spare yourself. If this wins the (now-Man-less) Booker I'll eat your hat.

But the news is *excellent*: This book wasn't on the shortlist!
Posted by Richard at 11:43 PM