THEY CALLED US ENEMY, a graphic memoir superior to almost every text-only memoir I've ever read 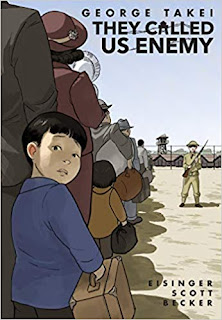 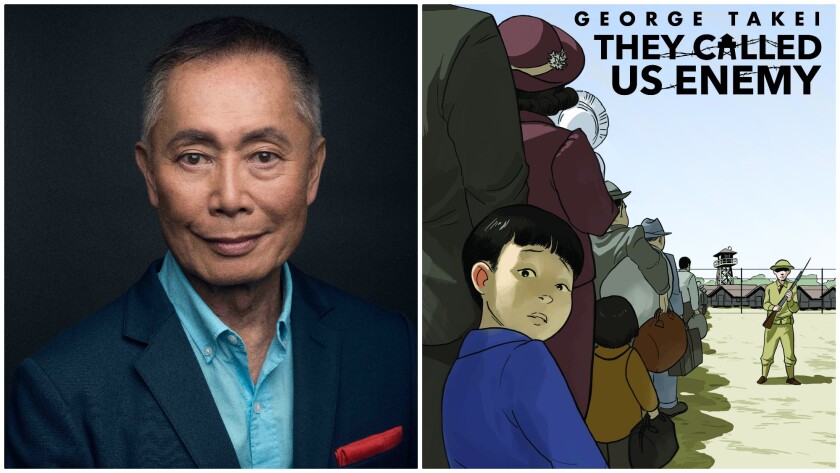 The Publisher Says: A stunning graphic memoir recounting actor/author/activist George Takei's childhood imprisoned within American concentration camps during World War II. Experience the forces that shaped an American icon -- and America itself -- in this gripping tale of courage, country, loyalty, and love.

George Takei has captured hearts and minds worldwide with his captivating stage presence and outspoken commitment to equal rights. But long before he braved new frontiers in Star Trek, he woke up as a four-year-old boy to find his own birth country at war with his father's -- and their entire family forced from their home into an uncertain future.

In 1942, at the order of President Franklin D. Roosevelt, every person of Japanese descent on the west coast was rounded up and shipped to one of ten "relocation centers," hundreds or thousands of miles from home, where they would be held for years under armed guard.

They Called Us Enemy is Takei's firsthand account of those years behind barbed wire, the joys and terrors of growing up under legalized racism, his mother's hard choices, his father's faith in democracy, and the way those experiences planted the seeds for his astonishing future.

What is American? Who gets to decide? When the world is against you, what can one person do? To answer these questions, George Takei joins co-writers Justin Eisinger & Steven Scott and artist Harmony Becker for the journey of a lifetime.

THIS WAS AN INTERLIBRARY LOAN THROUGH MY LOCAL LIBRARY. THANKS, Y'ALL!

My Review: A graphic memoir? Me? And give it five stars?!? Never. Will not happen.

Yet here we are: 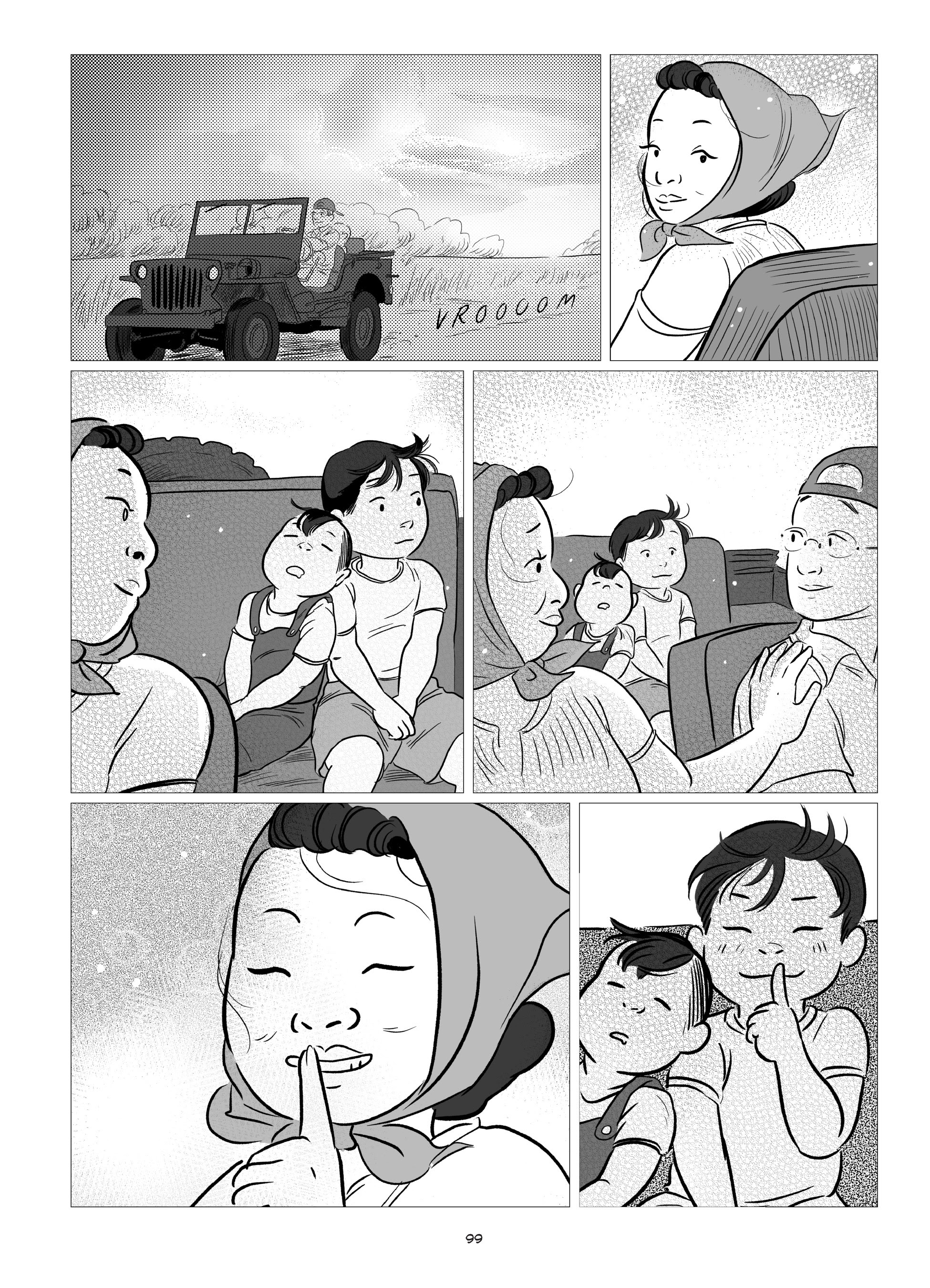 The horror of interning United States citizens based solely on the color of their skins!

Oh wait...we do that now..."interning" being synonymous with "incarcerating"...well, anyway, it's appalling and abominable. The Takei family is rousted out of their Los Angeles home by Executive Order 9066. They're shipped as far away from the Pacific Ocean as they can get: The Great State of Arkansas! *shudder* A swampy bit, as well...the Takeis weren't familiar with the climate, hot and humid summers with cold and snowy winters; the worst of all possible worlds for Mediterranean-climate natives!

George, brother Henry, and sister Nancy are lucky, however, as their father is a take-charge kind of a guy with a glad-handing streak as well as organizational capabilities, patience in abundance, and a generous heart. Mama Takei is sure her family will be okay despite everything because she is going to by-god *make* things okay. Her efforts to clothe and entertain her family, her strenuous work ethic keeping the children clean and as healthy as she can, mean that they're better off than many...so the Takeis help them. Because of course...those with nothing find a way to share with those who have even less.

There were good times as well as bad. Takei senior, as a helpful and useful inmate, got the family occasional privileges, like the use of a Jeep for a day out: 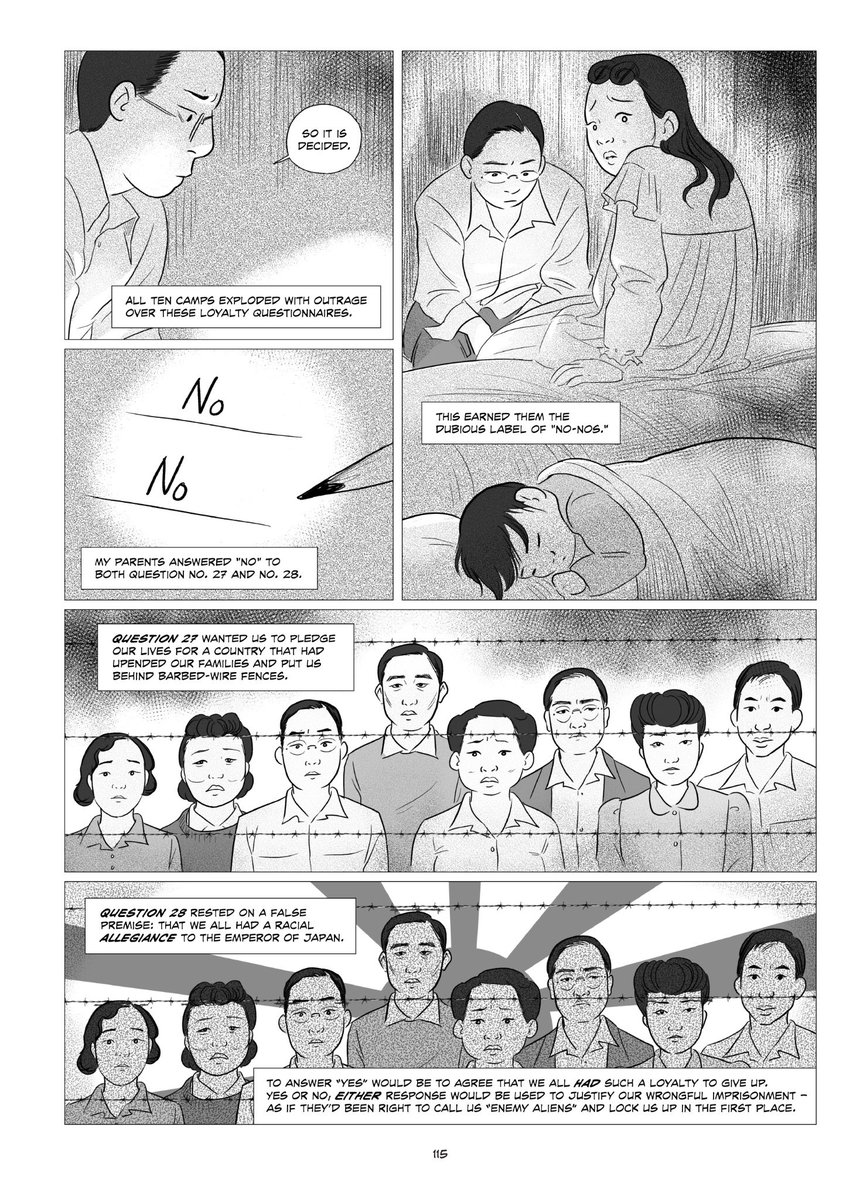 Not everyone in Arkansas thought the Japanese belonged in the camps. Not everyone in the US agreed with this vile act, this blot on the national escutcheon.

But tell that to the men who were young and patriotic enough to want to serve their country in the global war against fascism.

Their mistreatment at the hands of the democratic institutions designed to defend a citizen's life, liberty, and ability to pursue an existence that will make them happy radicalized them, leading to protests and horrors of oppression still worse than internment at Federal penitentiaries.

The tale ends, as we all know, when the war is over...but the country's wounds aren't healed so much as papered over. Now the returning African Americans, veterans and war workers, would need to gain civil rights...and there were injustices against the Japanese Americans unaddressed...and so on and so forth, to this good day, with others now in the victim role. Takei specifically draws parallels with the Muslim refugee crisis and the Hispanic emigration atrocities. He lived it. His voice carries authority: What we-the-people are allowing, even (I am nauseated to say) enjoying, to occur to Hispanic families is unconscionable, inexcusable, and proof that the lessons of history are lost on far too many of us.

Takei's journey took him into our living rooms on Star Trek: The Original Series, and its many sequels. He's spent his many years since riding that amazing introduction back into our lives advocating for positive social changes and fairer, more equal access to the USA's immense and unprecedented benefits for all. His life has been very well-lived and spent generously working to bring the American Dream into reality, only for *all* Americans.