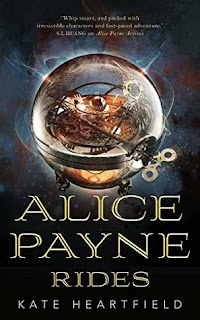 The Publisher Says: After abducting Arthur of Brittany from his own time in 1203, thereby creating the mystery that partly prompted the visit in the first place, Alice and her team discover that they have inadvertently brought the smallpox virus back to 1780 with them.

Searching for a future vaccine, Prudence finds that the various factions in the future time war intend to use the crisis to their own advantage.

Can the team prevent an international pandemic across time, and put history back on its tracks? At least until the next battle in the time war…

My Review: Back we go to the 22nd century, the Time Wars, and Prudence Zuniga's new base of operations with 18th-century pals Alice Payne, the lover of Jane, as well as the Holy Ghost...a mixed-race highway"man", and all-around badass; Fleance Hall, where she makes her home with Jane and her American Revolution veteran father and is dear friends with Constable Wray Aubry, her father's compadre during their time fighting the rebels in South Carolina.

Of course things on the Time War front are not easy: King Arthur of England is kidnapped from Brittany before John can kill him to become the Bad King John of the history you and I know. Who does it? Take a guess...I'll wait...and, once ensconced in Fleance Hall, Arthur's not going back to *become* King because he likes the 18th century too much. Check? Checkmate? Or just another day at the office for the Time War soldiery? Actually this bit is radically underdeveloped for my taste. We don't see much, and certainly nothing substantive, of young Arthur Duke of Brittany. He's never been King in *my* memory, and I'd've liked to see some hard graft in developing some kind of purpose for him. Never really happened, sad to say. The focus in a novella needs must be tight, and he's outside the cone.

Prudence, aware of the timeline's malleability to focus change, careful to keep her memories in a book outside the time stream. She realizes that General Almo has butterflied away her older sister Grace...of whom she carries no memories or attachments...and sets herself to Get Him Back while retrieving the sister she knows she loved. Even if she can't feel it anymore, the knowledge that someone used their power over the time streams to deliberately deprive her of her family makes her so boiling mad that her love for Grace might as well still be within her.

And Alice? Alice loses her father in 1789, but takes Jane back to 1780 to find out why he returned from the American War so changed. Bad move...the ripples in the time streams from their actions taken there are what put General Almo in mind of the plot to hurt Prudence...and now he has a new, truly terrifying, terrible weapon that bids fair to deprive Prudence of her wonderfully weird made family.

Here, at last, we confront the primary problem that plagues time travel fiction: If you're fighting a Time War, you can never truly win. The enemy can always jump before your latest victory and prevent it. Bummer, right?

Prudence is not a quitter. She's a brilliant, out-of-the-box thinker. And she's HIGHLY motivated to come up with an effective solution to that problem in order to use it on General Almo.

Reader, she succeeds. One of the cleverest endings for a time-travel tale I've read! The title aside, most of this book centers on Prudence, so let me share some of Author Heartfield's more pithy, elegant "tells" on Prudence's delightful character:


Prudence will seldom be drawn on the subject of the future. She protests that “the future” does not exist, that there are many possible futures, and that the future whence she came very likely no longer exists.
***
Prudence has long been a time traveller by profession; she is used to combing vocabulary and references out of her speech.
***
My mentor at the Academy used to say that time travel is like life: there are no rules, only consequences.

To cast Prudence in proper relief, there's something rotten about General Almo that is best shown, not told:


Your sister, like any other human or plastic fork or oak leaf on this planet, was the result of a million events that could have gone any other way. The individual has no inherent existence. A human life is ephemeral. A conjunction of cause and consequence. Each of us is just . . . information. And one piece of information is not any more valuable than any other. If time travel has taught me anything, it’s that individuals don’t matter.

But perhaps the best summation of the sheer joy of being alive and well in this topsy-turvy time-travel-enhanced Universe is Alice's rumination on what the point of it all truly is:


Does any of it matter? All things are true, might be true, have never been true. Knowing that makes the warmth of {her horse}’s neck, the flare of her nostrils, no less real. This life is all there is, all there ever is.