EMERGENCY SKIN, third of Amazon's Forward series of short fiction, a tale of what "woke"ness means 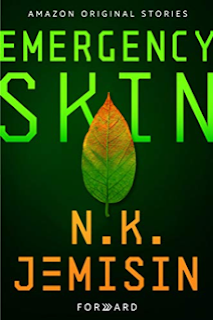 The Publisher Says: What will become of our self-destructed planet? The answer shatters all expectations in this subversive speculation from the Hugo Award–winning author of the Broken Earth trilogy.

An explorer returns to gather information from a climate-ravaged Earth that his ancestors, and others among the planet’s finest, fled centuries ago. The mission comes with a warning: a graveyard world awaits him. But so do those left behind—hopeless and unbeautiful wastes of humanity who should have died out eons ago. After all this time, there’s no telling how they’ve devolved. Steel yourself, soldier. Get in. Get out. And try not to stare.

N. K. Jemisin’s Emergency Skin is part of Forward, a collection of six stories of the near and far future from out-of-this-world authors. Each piece can be read or listened to in a single thought-provoking sitting.

My Review: The voice you hear in your head, you know the one that tells you how awful/bad/ugly/unworthy you are compared to...well...I guess that's a moving target, isn't it...takes on a special and especially malevolent life in this tale of what a low-class raider from one of Earth's long-gone colonies finds when the Mothership of Humanity is in its sights at last. There is an AI in the slave being's head narrating the Founders' take on what was Earth (they use the name Tellus for the planet, just go look at the storytelling sources for that term!) in its final death-agonies:


There were just too many people, and too many of those were unfit, infirm, too old, or too young. Even the physically ideal ones were slow thinkers, timid spirits. There was not enough collective innovation or strength of will between them to solve the problems Tellus faced, and so we did the only merciful thing we could: we left them behind.

The Founders, a few thousand of the most awful amoral greedy rotters the Earth is infested with, have made it off-planet and engineered a perfect slave economy. All the slaves are, well, cyborgs is the best word I've got for them; they are promised the gift of SKIN when they complete their raid of Earth's supplies of HeLa cells that the Founders need to make themselves immortal. Skin. A gift. A reward for being the obedient little slave who brings home what she can't have so her masters the Founders is...skin, ordinary human skin, the natural interface between us and the world, the very idea that this is a reward:


If you complete this mission, you’ll be a hero. Why would we refuse you what you’re due?

The narrative voice of the AI programmed by the Founders to keep their slave obedient and unquestioning spouts casuistries thus. The reward of skin, of being like the Founders, is at last causing the slave to question, to wonder why the Founders would keep their word.

The chattering horror of the AI's minatory, judgmental view of the Earth's inhabitants, those who were left behind as the Founders left and who the slave has been told are degenerate savages left to wallow in a broken, terrible world devastated by the Founders themselves for their own selfish benefit:


The Founders were the geniuses, the makers who moved nations with a word. We left because it would’ve cost too much to fix the world. Cheaper to build a new one.
***
At home, we maintain only as many people as we can safely sustain: six thousand total, including servi and mercennarii.
***
Only a few can have everything, don’t you see?

...and, the slave begins to wonder, what would make those who see the world in these terms offer membership in the literally immortal elite to a slave...

So the story wends its way from the slave's enbedded AI spouting awful stuff into the slave's unquestioning self to oversharing just enough to cause a cloud of suspicion to form to...well. That would be telling.

While this story is not subtle in making its points and drawing its thick, ruler-straight lines between the ideas it wants you to absorb, it is a fun and funny take on what "staying woke" really means. It is no wonder that the whiny Founders left today's incels and race warriors to die in their waste products. One would need to be of unusual dimness not to see the truth of Author Jemisin's comedically exaggerated points.

I take a quarter-point off for her one narrative infelicity: the AI only responds, and never do we hear the thought the slave creature formulates. It creates an unnecessary and slightly if increasingly unpleasant sense of being thwacked on the nose in order to be kept in line by an untrusting author. Presenting the subordinate being itself speaking, even if internally, causing the AI's addresses to us the readers to fit into a responsive mode instead of a hectoring one, would lessen that "THINK THIS NOW" sensation. I find its absence of subtlety undesirable; it can, when overused, make the brevity it allows the author to maintain to become more a kind of cursory-ness. "I won't fill in this shaded area, I will make it impossible to see it instead."

It suits the story in many ways. The reader is not persuaded but instructed exactly as the slave is. But Author Jemisin is a far, far superior craftsperson to need to rely on that level of didacticism to create the urgent, and urgently needed, message of this screed against greed.
Posted by Richard at 9:43 AM