TAINTED WITNESS: Why We Doubt What Women Say About Their Lives, or #MeToo didn't just *happen* 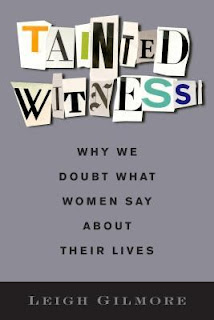 The Publisher Says: In 1991, Anita Hill brought testimony and scandal into America's living rooms during televised Senate confirmation hearings in which she detailed the sexual harassment she had suffered at the hands of Clarence Thomas. The male Senate Judiciary Committee refused to take Hill seriously and the veracity of Hill's claims were sullied in the mainstream media. Hill was defamed as "a little bit nutty and a little bit slutty," and Thomas went on to be confirmed. The tainting of Hill and her testimony are part of a larger social history in which women find themselves caught up in a system that refuses to believe what they say. The Anita Hill case shows how a tainted witness is not who someone is, but what someone can become.

Why are women so often considered unreliable witnesses to their own experience? How are women discredited in legal courts and in courts of public opinion? Why is women's testimony so often mired in controversies fueled by histories of slavery and colonialism? Tainted Witness takes up these questions within a rich archive, including Anita Hill's testimony as well as Rigoberta Menchú Tum's account of genocide in Guatemala; Jamaica Kincaid's literary witnessing in Autobiography of My Mother; and news coverage of such stories as Nafissatou Diallo's claim that Dominique Strauss-Kahn raped her. Bringing together legal, literary, and feminist frameworks, Leigh Gilmore provides provocative readings of what happens when women's testimony is discredited. Throughout, Gilmore demonstrates how testimony crosses jurisdictions, publics, and the unsteady line between truth and fiction in search of justice.

THE PUBLISHER SENT ME A REVIEW COPY OF THE BOOK AT MY REQUEST. THANK YOU.

My Review: This is an academic work of depth and authority on the ever-vexing topic of what leads Society (my capital) to treat a woman's word as suspect, especially about her own experiences and her own life.

Essentially, women are treated with contempt and rage by men in general. Their words, therefore, when spoken about men and to other men, must be considered in that context...why would she lie, versus when she speaks, she lies. I am *grossly* oversimplifying the latter, and the author does not present her facts about the former, but this is a formulation that gets to the heart of my take-away from the book.

The additional "defect" of Blackness mars a woman's credibility within the white patriarchal systems of "justice" and "fact-finding" because "you know how they are," the loudly quiet evocation of all the slurs, lies, and oppressions used to discredit Black people. Anita Hill's accusations against Clarence Thomas are delved into with some depth. Thirty years later, I still boil when I think of Dr. Hill's vile treatment by the conservative Old Boys' Club in the Senate. (I assert most, if not quite all, Senators are conservative, or were in 1991 anyway.)

Perhaps the most cogent argument Author Gilmore presents in service of her case against social attitudes towards women's bearing witness is the case that neoliberal culture has privileged stories of Overcoming, of Beating the Odds, the System, as opposed to the more realistic way of viewing the System as flawed, broken, unfair, all by design. That design is put in place to keep the powerful protected, and the powerful are white and male. Narratives examining the system's failures are downplayed where they can't be dismissed or vilified. It's that women/the disadvantaged aren't trying hard enough! Look at {insert neoliberal here, eg JD Vance or James Frey}! They overcame their obstacles! Try harder, Jamaica Kincaid, Rigoberta Menchú!

This is balderdash, of course, and the author briskly defangs the "arguments" for it. A pair of examples of this, as well as the author's academic writing style:


A tainted witness is not who someone is but who someone can become in the process of bringing an account into the public sphere.
–and–
Tying the evolution of #BlackLivesMatter primarily to its responses to a series of killings of African-American men and boys by police officers, as some articles have, obscures the feminist focus on {B}lack lives broadly. By refusing a presentist framing of the event, #BlackLivesMatter is not, as its founders make clear, only about what happened but about how to frame it, how to bear witness to histories of the present, and how to look at images of death, grief, and protest as a form of ethical engagement.

These are not unclear or grammatically flawed statements; neither are they elegant, nor rhetorically exciting. They are true, unsparingly honest, and effective in making their cases.

I longed for more than that. It wasn't an easy read, it was in many ways an unpleasant book to read due to its trenchant indictment of privileged peoples and people's cynical, lazy, and cruel means of disempowering and devaluing The Others to maintain their privilege. I'm seeking a rousing call to arms, though, and while I wasn't promised this when I chose this book to read and review, I had set my hopes on it.