RED SKY MORNING: The Epic True Story of Texas Ranger Company F, the kind of focused-on-a-story history that fascinates my Texas-rooted self 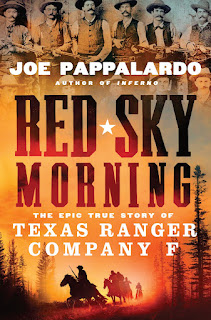 The Publisher Says: The explosive and bloody true history of Texas Rangers Company F, made up of hard men who risked their lives to bring justice to a lawless frontier.

Between 1886 and 1888, Sergeant James Brooks, of Texas Ranger Company F, was engaged in three fatal gunfights, endured disfiguring bullet wounds, engaged in countless manhunts, was convicted of second-degree murder, and rattled Washington, D.C. with a request for a pardon from the US president. His story anchors the tale of Joe Pappalardo's Red Sky Morning, an epic saga of lawmen and criminals set in Texas during the waning years of the “Old West.”

Alongside Brooks are the Rangers of Company F, who range from a pious teetotaler to a cowboy fleeing retribution for killing a man. They are all led by Captain William Scott, who cut his teeth as a freelance undercover informant but was facing the end of his Ranger career. Company F hunted criminals across Texas and beyond, killing them as needed, and were confident they could bring anyone to “Ranger justice.” But Brooks’ men met their match in the Conner family, East Texas master hunters and jailbreakers who were wanted for their part in a bloody family feud.

The full story of Company F’s showdown with the Conner family is finally being told, with long dead voices being heard for the first time. This truly hidden history paints the grim picture of neighbors and relatives becoming snitches and bounty hunters, and a company of Texas Rangers who waded into the conflict only to find themselves over their heads—and in the fight of their lives.

My Review: I'll start by lauding what other readers have liked least about this book: It is a mosaic of multiple stories, and intentionally so. The design of a history that's focused on a story, not a biography, is to collate the fascinating pieces and ugly, disfiguring truths that make up the whole picture of the moment in question...it's meant to be taken in piece by piece, and assembled in one's mental theater as a whole image of The Defining Conflict.

To that end, we meet the main main, James Brooks, as he surveys Cotulla, Texas, on the day he joins the Texas Rangers in 1883. Author Pappalardo begins, then, at a beginning...but we're going to see other beginnings as we go along. We'll see the last of active Rangers Captain Brooks in Cotulla, too...and that's the kind of symmetry I appreciate in a story.

What happens between those two events, not hugely distant in time, is...a lot. A great deal more than one person's life generally holds, and a great deal less as well. Brooks, in his entire life of genuine service to the people of Texas, never shook a debilitating addiction to alcohol and an equally debilitating inability to form sustaining, intimate friendships with anyone. This included, as it is so sad to say, his own family. He was married to one woman his entire adult life. There is no record or indication in any recorded memory that he found any sense of companionship or happiness in their union, nor did she express any enduring or undying affection for her husband. His children were dutiful, and always played their role of help and sustenance for him, but again there is not any record of them feeling hero-worship for their truly outsized and outstanding father.

Brooks County, named for the Captain (as he always preferred to be referred to and addressed despite having the options of Representative or Judge), was a creation of the remarkable man's efforts to drag a thousand square miles of mesquite scrub and caliche and its few thousand residents out of the hands of a corrupt Democratic party machine in the early twentieth century. He was, at the time, a State Representative, and his life-long campaign of fair treatment for Spanish-speaking people and law-abiding souls of all skin colors and ethnicities made Brooks County and Falfurrias havens of good, equitable Democratic-party led government.

In the chapter dedicated to this end-of-life résumé of Brooks, there are résumés of his cohorts in Company F, all of whom were with the Captain during the main action of the book...the take-down of the Sabine County-based Conner crime family in the weird swampy Louisiana-like East Texas world. It was a long, tense fight on the logistical and legal levels, and Author Pappalardo doesn't stint on the practical details. There are a LOT of people in this story. There are a LOT of names that appear, then aren't mentioned for a while, then reappear with minimal fanfare. There is a Dramatis Personae that can be bookmarked or hyperlinked in your ereader, and I strongly suggest that any readers do that very thing. I found it hugely helpful and on occasion, to my utter lack of surprise, its completeness and thoroughgoing explanatory notes were interesting enough to make me want more books about this century-old vanished culture.

What I want from histories is a sense of the why of things. The what is great as a launchpad but I really treasure whys. In that arena, Author Pappalardo is a strong deliverer. I was never at a loss for reasons to pick up the book. I took it at a measured pace, a chapter a week and a section or two a day. I think this is the most likely technique to give the story its full room to expand and its details to slot into each others' proper settings. Since I am from Texas, I was prepared with some ideas of the roles of lawmen, and specifically the Texas Rangers, in the state's history. Since I am from that part of Texas, it was even more of a sense of homecoming, of learning my own family's cultural past. That added soupçon of personal connection is likely the source of the extra half-star I hung on the book.

It really is extra, as I can understand from others' responses to the read. Quite a few readers were unable to see the nature of the story being told and that is squarely on the author's shoulders. His stated aim is to answer this quote from one N.A. Jennings, a former Texas Ranger of that time and later an author in his own right:


"Near everyone has heard of the Texas Rangers, but how many know what the Rangers really are, or what are their duties? In a general way, everyone knows they are men who ride around on the Texas border, do a good deal of shooting, and now and then get killed or kill someone. But why they ride around, or why they do the shooting, is a question which might go begging for an answer for a long time without getting a correct one."

This expectation being set in the Introduction, I can see a history buff feeling let down. This isn't the book that answers that question. It doesn't seem to me to be particularly likely to, set up as it is to tell the story of a group of Rangers involved in one of the organization's formative operations. The personal focus falls most heavily, and in my opinion correctly so, on the Captain, James A. Brooks, and the people he led come in for bits and snatches of attention. But the light that shed on the Texas Rangers as a whole, while bright and revealing, does not get even partway to explaining the entire late-1800s period of the organization's existence that Author Pappalardo indicated it will.

But what the book actually does is, to my way of thinking at least, as valuable or even more so. It traces the roots and the branches of a conflict between the law-and-order forces of state power and the flouters of same whose actions and influence were seriously detrimental to the community as a whole's ability to live their lives free from fear and danger. There are people worse than police today, there were in the 1880s, and the worst is when those terrible actors turn the police into their henchmen. Along come the Texas Rangers of Company F to reset the expectations of the community for law enforcement...and they do.

It might not be what we think of in terms of law enforcement's role today, after Rodney King's beating and George Floyd's and Ahmaud Arbery's murders at their hands; but it is true, it happened, and it's worth considering that if it seemed impossible to the people of Sabine County in 1885, and it wasn't, that it isn't impossible today either.

That deserves my attention, and my praise.