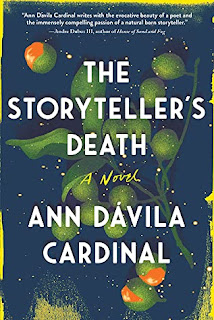 The Publisher Says: From International Latino Book Award-winning author Ann Dávila Cardinal comes a gorgeously written family saga about a Puerto Rican woman who finds herself gifted (or cursed?) with a strange ability.

There was always an old woman dying in the back room of her family’s house when Isla was a child...

Isla Larsen Sanchez’s life begins to unravel when her father passes away. Instead of being comforted at home in New Jersey, her mother starts leaving her in Puerto Rico with her grandmother and great-aunt each summer like a piece of forgotten luggage.

When Isla turns eighteen, her grandmother, a great storyteller, dies. It is then that Isla discovers she has a gift passed down through her family’s cuentistas. The tales of dead family storytellers are brought back to life, replaying themselves over and over in front of her.

At first, Isla is enchanted by this connection to the Sanchez cuentistas. But when Isla has a vision of an old murder mystery, she realizes that if she can't solve it to make the loop end, these seemingly harmless stories could cost Isla her life.

My Review: A young-adult fantasy-with-mystery that utterly charmed me. When Isla's unusual ability to recall, if that's the word, the stories of her family's past. If it involved one of her ancestors, she can see it! Like she was there! What a fascinating, and honestly useful, paranormal ability to have. She's got a window into her family's past that could be hugely important because, well, History is nothing but His Story and isn't it the greatest thing ever when Her Story can be told?! I was so excited!

"Reality" had to intervene, stupid boring reality!, just like it always does...not everything that happened in the past was pretty. We know this, but Isla can see it because her abuelita, on her death, passed the mantle of being a cuentista, Story-Woman, to her. Suddenly Isla's mother's sad descent into alcohol abuse and her consequent abandonments of Isla with her grandmother in Puerto Rico made more sense...it's never explicitly said, but Isla's mother seems like someone who really couldn't handle the very dark gift of becoming a cuentista. Isla's painful childhood of betrayal and loss and coping with mental illness's consequences uniquely prepares her to cope with the true burden of Remembering her family's history. And it gives her the strength to right old wrongs.

What a great idea, right?! And what a great market to target with this message, that everything that happens to you can be used to build something wonderful if you use it that way; something I truly wish more people were taught from little on up to spike the victim gun we tend to hold at our own heads. Isla's struggles with grief...her own, her mother's...at her father's early death were not dwelt on or minimized. Her mother's ongoing struggles with alcoholism are honestly, forthrightly presented as the major issue they can't help but be, yet aren't sensationalized or pounded into dust as the hobby-horse gets ridden. I was completely delighted with the storytelling voice, as well. In all, this sounds like a five-star rave, doesn't it...so why's there a "4" in front of the "5"?

Because, in service of speed I suppose, Isla faces next to no obstacles in her quest to understand the decidedly mixed blessing of becoming a cuentista. Anyone she needs to speak to, they're still alive and they're available now and they're eager to help. Hmm, that's a bit too easy...then there's the underexamined role of colonialism (internalized and not) inherent in stories about Puerto Rico's past and how that impacts her grandmother's growing up, her mother's choices, the whole kit and caboodle. The stories and their injustices were, it's true, redolent with the issues of racism and colorism, but these factors could have benefited from some further reflection in Isla's viewpoint's evolution. It's a small niggle. And it's way more than outweighed by the delight I felt in immersion into a family whose language world is Spanish-inflected English. This is something I very much enjoy and, while I'm bringing it up to you as a positive, there are readers who won't feel comfortable with it and thus might make their decision to read the story or not on that factor.

On the whole I wish they would take the plunge and get the book from the library. Try the waters! There's nothing to lose except a small investment of time in that case. The strong possibility, in my view, of broadening one's horizons a bit more is well worth the risk. It's a lovely story and Cuentista Dávila Cardinal has the chops to bring you along on one really excellent ride. 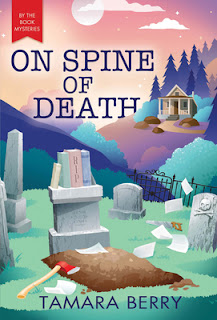 In the aftermath of solving their first murder, bestselling author Tess Harrow and her teenage daughter Gertrude have decided to stay in Winthrop permanently. Now that they've made some updates to their cabin in the woods, they're turning to the family hardware store that Tess inherited and converting it into the town's first independent bookstore. But when renovations unearth bones from a cold case and send them toppling—literally—onto Tess's head, the work comes to a grinding halt. With the whole town convinced that her grandfather was a serial killer, Tess has to call in a fellow horror author for reinforcements. Together, they'll come up with a perfect story to make all the clues fit...and solve a mystery more than thirty years in the making.

My Review: Not many writers will 'fess up to their weirdest research methods. Tess Harrow doesn't have a lot of choice...she's tied to a chair in a basement struggling to get free (research!) when the floor above her collapses. That, my friends, is how you open a story!

When Tess, a bestselling thriller writer and mother of a teenaged girl, needs to make a big change in her life, the opportunity to take over her late grandfather's hardware store and cabin in small-town Washington State arises. Teenager in tow, off Tess hares. It's quite clear that she won't be running a hardware store so she does what so many writers say they'd love to do and decides a bookstore is what the town needs! (The town was not consulted, but never mind.)

In the course of renovating the store, a skeleton is uncovered in a...peculiar...place. Then there's another one! All in her dear old grandfather's store! Was her belovèd grandfather a murderer?! Or if not, was he an accessory to murder? Either way, Tess wants to know (let's face it, she's stumbled into one helluva tale) and the local Sheriff doesn't much want to speed his investigation up just for this high-handed Bigfoot author from out of town. There are Procedures. They're there to make a case solid and an answer to the Big Questions of who, what, when, and why (where being known in this case) trustworthy and that's what matters to his law-enforcement officer self.

Tess, coming at this from three angles and none of them inspiring her to patience (store owner, granddaughter, thriller writer), naturally clashes with Slowpoke McPutt-putt. The sparks must fly, mustn't they, to make the needed heat for the series to rise to new heights? Add in the teenager's discomfiting fascination with Sylvie the coroner's job (to the point that she's shadowing the poor thing really, really closely as a school project), and there's a lot of moving parts. That's what makes the read so much fun...the way Author Berry keeps all the balls in the air and manages to cast your attention into the blind alleys she needs for it to be distracted by...well, it's fun to be in the presence of a skilled practitioner at her peak.

The renovations, the bodies, the people who just *happen* to be not quite who they say they are, the motives for the locals to take sides on the uncomfortable rooting about for answers to the Big Questions...all are standard elements handled in deft ways. They aren't surprises. They aren't meant to be, and they're all the more welcome for not being. I think the series will have legs because it's already got a smile of its own. It's presenting your ma'at-sensing organs with truth and justice but they're not as simplistically presented as they can sometimes be in series mysteries. There's thoughtful commentary on the way of the world, there's a damn-near evergreen scented evocation of the way small towns in the piney woods operate, there's the always-fun fish out of water growing into a local institution trope...remember Northern Exposure?...and it's done with panache, if not philosophical depth.

Great for the season's snatch-a-chapter-in-line reading habits because it's already episodic!