DIRT ROAD HOME, charming young-adult/coming-of-age novel I expected not to like but did 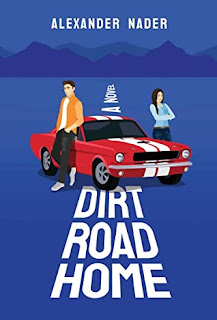 The Publisher Says: City kid Logan Davis is about to find the family he never knew he was missing at the end of a country road.

Logan has no interest in leaving Detroit. But when his impulsive mother shoves him and his brother, Dex. in the back of her old Buick to chase her newest husband in Tennessee, he thinks heading south will be the end of the world. A physical confrontation with a local football star on his first night in town seems to confirm his worst notions.

Prepared to encounter every stereotype in Pigeon Forge, Tennessee, Logan soon discovers his new home might not be all that different. His knack for fixing up fast cars helps him fit right in with the wild and loud southern attitude. A chance encounter at a back road street race leads him directly into the path of the undeniable spirit of the south; her name is Leah.

Dirt Road Home is a novel about finding yourself and realizing that sometimes you have to travel five hundred miles away from your house to find your home.

I RECEIVED A DRC FROM THE PUBLISHER. THANK YOU.

My Review: My god, I hear regular readers saying under their breaths, what the hell got into this old man? TWO books you can call YA in two days...with four stars!

Yep. The publisher reached out to me on Twitter before the book came out...not all the way sure why...and said "you'll like this book." And I did, really surprising myself most of all.

Logan's a kid about to become a young man. He's got some skills at car-related mechanical work. He's got a mother who's a disaster at picking men. He's got a jock as an enemy in their new town. His just-barely-younger brother is his wing man, and his fellow gearhead. It's all gonna go just swell, ain't it, thinks annoyed frustrated Logan.

Leah's the kind of girl who goes to the street races. Not with someone, she goes on her own because she likes it. The best thing about this story for me was the way these two slightly weird kids felt the gravity of each others' existence. There's the key to the story being a coming of age/young adult book: they have that feeling for each other and the whole time, they don't even question it. They're each thrilled with their luck.

Then there's the man his mother dragged her boys to Pigeon Forge, Tennessee, to be with. Another disaster, I though cynically. Another antagonist. Indeed not, cynics. Greg is the absolute best guy...patient, kind, accepting...that everyone in the family could have hoped to meet. He's a prince among men.

I *did* say it was aimed at young adults.

Why I liked it, though, was the economical prose wasn't at the expense of the characters being realized. It felt to me that the details Author Nader gave us were quite simple, but carefully chosen.

I'm trying to decide if it would look better if I dug a giant sleep-booger out of my eyeball or just left it and hope she doesn't notice.

I came away thinking Logan finally got something good out of the craptastic life his mother had led for them. I was glad for them all that Greg (for unknowable reasons) decided this was the woman he wanted out of the billions there are. Luck for them all, he did.

I'm surprised at how much pleasure I got from this long-afternoon's read. I hope y'all give the story a chance to beguile you, too.